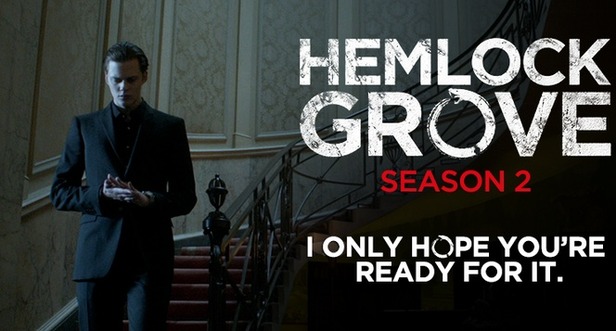 Yes, Olivia and Shelley are still a part of the show. If you watched season 1, you know that the survival of both characters was in question, but in true supernatural fashion, they’re back. (Warning: There are a few season 1 spoilers and season 2 teasers in this article.) Season 2 will be ready for binge-watching at 12:01 Pacific time on July 11, 2014.

Below are highlights from the interviews:

Dougray Scott described his character as follows: “Norman became a psychiatrist because he wanted to get as far away from the family dynasty as possible. He was never interested in standing on the hill looking down at the town below. He was a people person. But I think that there’s remnants of his family’s DNA that reside within him, so I think there’s always some sort of conflict.”

I asked Dougray if his character would be having as much sex in season 2 as season 1, and he gave us a “cheeky” answer in his native Scottish accent: “I enjoyed the sex in the last season, but [there’s] not quite as much [in season 2]. He has a bit. I was having a lot of sex last season.”

Famke Janssen told us she isn’t a fan of horror as a viewer. “I’m not good with the blood and the gore, so I don’t know how I’m going to get through the last episodes,’ she said. “I don’t like gore; I don’t like sci fi. I watch anything from documentaries to foreign films to independent films. The film I directed was an independent film [‘Bringing Up Bobby‘]. It [the sci fi genre] likes me, and I’m assuming it’s because I look like a freaky alien…. The fact that I’m 5’11-1/2”, dark hair, and I’m a foreigner, it’s the only thing they know what to do with me. I can’t play the girl next door part so much.”

When asked her dream part, she quipped, “the girl next door.” She’s quick to point out, though, that she’s far from unhappy with the darker roles. “There are a lot of people standing behind jumping at the opportunity to do just one movie or one episode or one line of what I’m doing,” she said. “So, to not be grateful for that would be awful and not right. So, I’m honestly so incredibly grateful for every opportunity I get in this business. Don’t forget – I was born in a tiny little country in a small town, and here I am working in Canada and America, and it’s incredible.” (Famke grew up in The Netherlands.)

Despite her aversion to gore, Famke likes working on a series with Netflix. “Other than the one ‘Nip/Tuck’ experience I had for one season, TV is not something I’m familiar with,” she said. “I like this very much because it functions a lot more the way that film functions. You don’t have to use the cliffhanger every week to have people wait … ‘Oh, what’s going to happen, and let’s wait for one week to see what happens.’ We don’t have any of that, so it’s a much more interesting way of storytelling in the way that I’m more familiar with it.”

After Olivia’s near-death experience in the last season, both her home and her wardrobe have changed in season 2. “There have been many changes, and one of them is in the wardrobe – colors more than anything… I have to upstage the blood once in a while,” Famke joked.

Joel de la Fuente, who plays the notorious Dr. Johann Pryce, had such a good time chatting with us that he took a photo of us and put it on Instagram. Talk about turning the tables … or the camera.

I asked him if he thought of Dr. Pryce as a mad scientist in the traditional sense. “I tip my hat to Dr. Moreau and Frankenstein and all of the people that he is a descendant of, but at the same time, it’s hard to play that once you have that,” he said. “So, what’s really great is he has a very clear sense of what he wants, but how he goes about it is very mysterious. So, it’s been a lot of fun to take certain tropes and then to kind of twist them or have new variations on them. It’s kind of a new variation on the mad scientist….”

“An interesting thing right off the bat is that Pryce is disconnected from feeling sometimes. He processes emotion almost via third party. To me, that’s what’s interesting and also kind of creepy about him. He doesn’t respond like how a person would respond,” he added.

We do get to see Pryce’s humanity in his love for Shelley. “He’s really trying to live in this world and be good – whatever he thinks that means,” Joel said. He disclosed that we get to see Pryce in his pajamas more than once in season 2.

“He’s on pace to achieve what it is that he’s trying to achieve, so there’s a kind of excitement and tension for him as he gets closer and closer to something he’s always been chasing,” Joel said. “He’s in the last mile of a marathon that he’s been running, and he thinks he’s going to finish it. Then, all of a sudden, things start creeping up that are getting in his way.” Sounds dangerous, huh?

Demore Barnes plays Michael Chasseur, whose sister was killed in season 1. In season 2, he wears a sheriff’s uniform, which puts him in a position of power as he investigates his sister’s death.

“He’s badass from the beginning. We’re talking intellect, we’re talking weaponry, we’re talking strategically,” Demore said. “I think people might be surprised as well or interested to see from an emotional standpoint how deep and wide he runs.”

“I think it’s going to be interesting for the audience to see just how much Michael was aware of and how oblivious he actually is and to watch that unfold,” he added in appropriately cryptic fashion.

Madeline Brewer, who was on season 1 of “Orange is the New Black,” plays new character, Miranda, who is covered in tattoos. Madeline said she sometimes wears the temporary tattoos home and gets strange looks around town when they start to wear off.

“Miranda is a graphic novelist who was just innocently driving through Hemlock Grove on her way to California when, in true Hemlock Grove fashion, things got weird. And now, she’s stuck there and becoming a very interesting part of the story,” Madeline told us.

As for working with the blood and gore, she said, “It’s a little creepy at first, but everything’s so specific and technical. I feel like when I watch it, it’s going to be a lot scarier.” At least Madeline, unlike Famke, is a big fan of horror and sci fi as a viewer. “One of my favorite things about ‘Hemlock Grove’ is that it’s unique and just weird,” she said.

She mentioned that she was on set when Bill Skarsgard, as Roman Godfrey, had to eat “some really nasty stuff” that, while made out of real food, was designed to look disgusting. Yum.

Madeleine said that it’s challenging to act with her face altered by lots of makeup and prosthetics – a process that takes about 3 hours. But trust me, after having seen episodes 1-6 of season 2, I can say that Shelley pulls at your heartstrings even more than in season 1.

Stay tuned for another article that includes interviews with the new showrunner and the talented technical team who make the prosthetics, design the sets, and create the special effects. Meanwhile, check out the Behind the Scenes video below (but bear in mind that it isn’t PG-rated.)