SYNOPSIS: Scarlett Johansson plays a woman accidentally caught in a dark deal who turns the tables on her captors and transforms into a merciless warrior evolved beyond human logic. 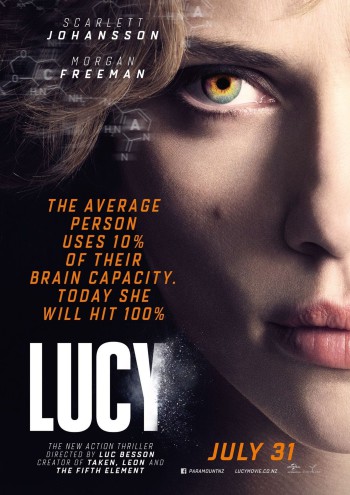 REVIEW: I’m always down for seeing females kick ass on screen, and Scarlett Johansson brings it home as the title character in “Lucy.” Paired with Luc Besson, whose credits include such action films as “Brick Mansions, “Lockout” and the “Transporter” and “Taken” franchises, this movie is a worthy installment to whatever genre it is that blends crime, action, sci-fi and, oh yeah, kick-ass females.

Lucy is a fairly normal young woman, living in Taipei and dating a guy who just happens to be a delivery guy for the local mob. When she gets roped (or rather, chained to a briefcase) into making a delivery to the boss, Mr. Jang (Choi Min-sik), she unwittingly becomes a mule for a new kind of super-drug. Things go from bad to worse when the bad guys sew a plastic bag of the stuff into her stomach cavity.

But that’s not the worst of it. When the bag bursts and the drug is released, Lucy discovers that she can see and feel and hear and remember everything. Her brain ramps up the bandwidth and soon she’s traveling through time and space, moving matter around and, oh yes, kicking ass. Those mobsters are so sorry they picked her to do their dirty work.

As the drug continues to open up her brain — the filmmakers help us keep track by flashing the amount of brainpower she gets throughout the day, i.e. 20%, 30% and so on — she decides to gather the rest of the drug packets from the other mules and buy some time. Then she meets with brain expert Professor Norman (Morgan Freeman) to decide what to do with her superpowers. But Mr. Jang is still hot on her trail.

The first part of “Lucy” is terrific. I couldn’t even fiddle with my phone (don’t judge – I’m always way in the back, away from other moviegoers) because I was so mesmerized watching Johansson whoop ass and take names. There’s something just so awesome about a female vigilante, and Johansson has turned into a formidable action star over the past few years.

But aside from the fierce female factor, “Lucy” is a smart, thoughtful and exciting film, and one that showcases Besson’s enthusiasm for science and sci-fi, all in one package. There’s also his usual amount of gore, and the body count is high. These bad guys are really, really bad.

By the third act, however, I felt like the story jumped the shark — in an amazing way, but still jumped the shark — and I kind of wish it had ended differently. That’s all I’ll say, so I don’t get deluged with spoiler hate mail. Even on that note, though, “Lucy” is a lot of fun and worth checking out (even if it makes me think twice about increasing my meager brain capacity).

Sex/Nudity: A documentary-type flashback shows animals having sex, a man and woman having sex in a car, and several images of animals and humans giving birth. Johansson’s curvy figure is accentuated throughout the movie, and in a couple of scenes, men place their hands down the front of her top. While seducing a guard (and then swiftly defeating him), Lucy spreads her legs apart. She also kisses a man after he helps her.

Violence/Gore: The body count and splatter factor is high. People are shot, killed, chased, stabbed, soaked in blood, and used as drug mules, with drugs sewn up inside their stomach cavity, requiring several bloody surgeries. Lucy is grabbed, punched, and kicked in the stomach. She also has several dramatic seizure episodes as the drug takes effect.

Which Kids Will Like It? It’s pretty violent and the R rating is on target, so I’m going to say 18 and older on this one.

Will Grownups Like It? “Lucy” is fast-paced and mesmerizing, with lots of action and great special effects. If you like sci-fi movies and don’t mind the blood and gore, it’s worth checking out.