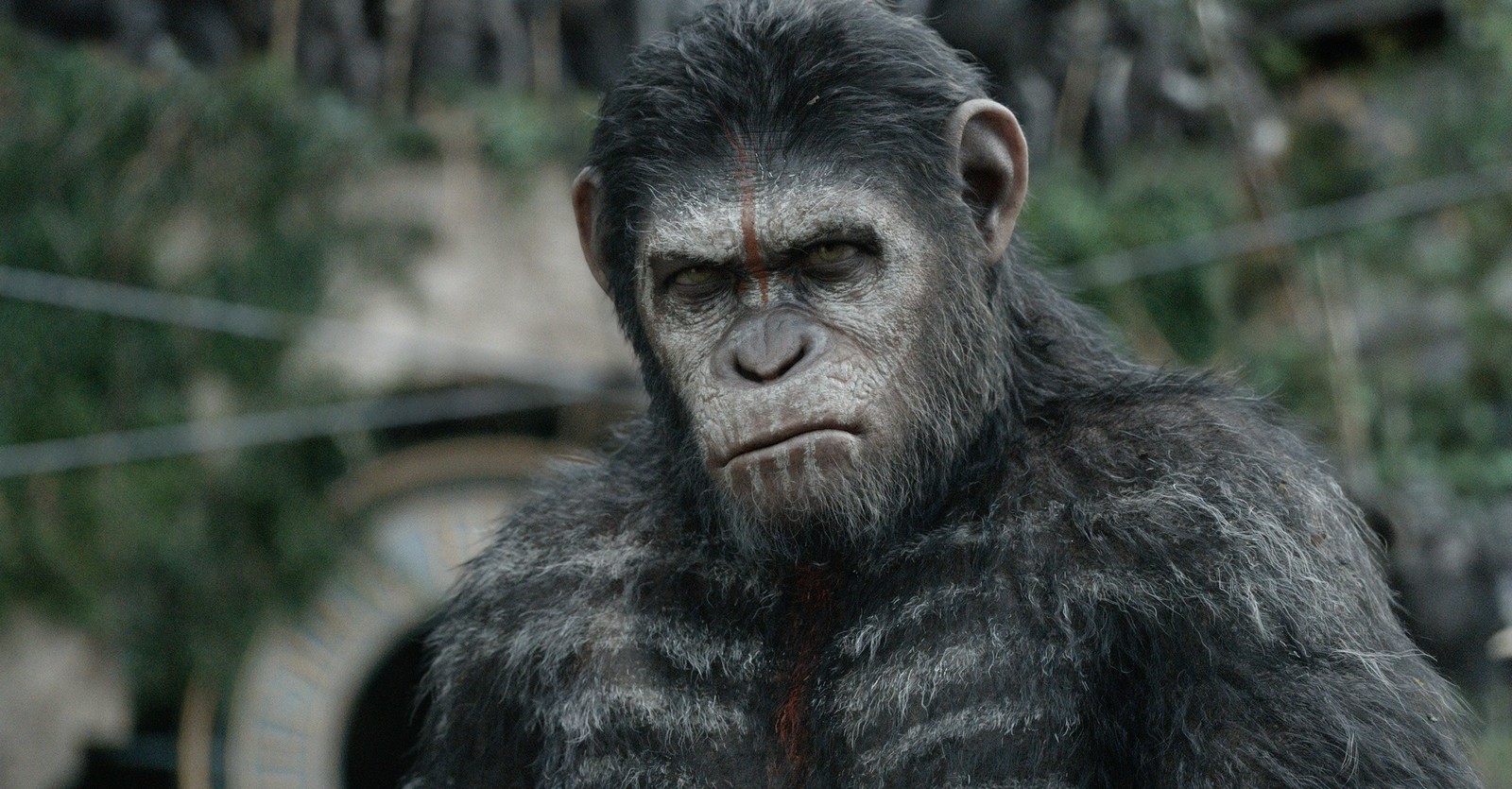 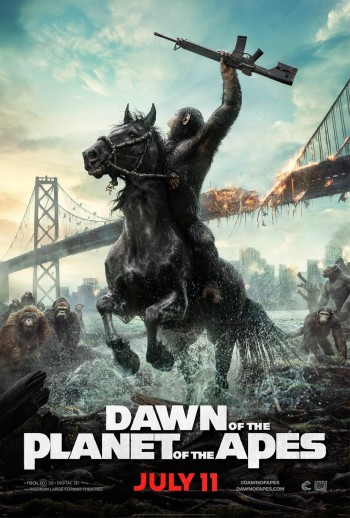 EDITORS: Buy this review/gallery (and other cool editorial content) in our Shop.

Official Site: Dawn of the Planet of the Apes

SYNOPSIS: It’s been ten years since the Simian Flu wiped out most of the human population, and a small faction remaining in San Francisco need to restore a dam to boost their dwindling power supply. Only problem? The dam is smack in the middle of a community of well-organized, genetically evolved apes, led by Caesar. One thing leads to another and pretty soon, it’s all out war.

PHOTO GALLERY: Dawn of the Planet of the Apes

REVIEW: All hail Caesar! And Andy Serkis! The motion-capture actor reprises his role as the ape leader in the second installment of this century’s retelling of the classic apes vs. men tale (Note: I’m not including Tim Burton’s 2001 debacle). What a great niche Serkis has carved out for himself, inhabiting such characters as Gollum in the “Lord of the Rings” movies, the title character in “King Kong,” and Caesar in this franchise, among others.

I loved the first movie, 2011’s “Rise of the Planet of the Apes,” and was pretty geeked about seeing this one. It doesn’t disappoint. It’s mesmerizing in every way, from the settings (ranging from lush to apocalyptic) to the relationships among the characters. It’s as much a family story as it is an action-thriller. The apes just want to raise their families and live peacefully in the woods, and the humans want the same thing. But a few bad apples set things lurching toward a point of no return.

The story picks up ten years after the events of the first movie. The Simian Flu has spread across the planet, killing most of the humans and plunging the world into doom and gloom. In the woods near San Francisco, Caesar (Serkis) and his super-smart ape pals have created a peaceful society in which everyone lives by the rule that no ape will kill another ape.

When a group of humans led by Malcolm (Jason Clarke) and hothead Carver (Kirk Acevedo, Charlie Francis on “Fringe”) stumbles upon the ape sanctuary while looking for a dam, the apes are not happy about it. They surround the bewildered humans, and leader Caesar vehemently orders them to leave (seeing him “talk” gives me goosebumps). After all, some of those apes still remember being caged and tortured by the humans.

But the humans are running short on power, and restoring that dam is their only chance at survival. So Malcolm, along with his teenage son Alexander (Kodi Smit-McPhee, who earned his apocalyptic chops playing Viggo Mortensen’s son in 2009’s “The Road”)  and wife Ellie (Keri Russell) returns to ask the apes’ permission to check out the damn. Koba (Toby Kebbell), one of the tortured lab chimps, is against it and doesn’t trust the humans.

But Caesar, who has fond memories of his time with Will in the first movie (James Franco, who makes an appearance in this movie, thus confirming my theory that he’s in 80% of all the movies out there), is more trusting and allows Malcolm and his crew to proceed. This leads to a tense relationship between Caesar and Koba, which sets off a tragic series of events, which results in all-our war between the apes and humans.

Matt Reeves is a gifted director in that he’s able to create such thoughtful personalities and relationships among the apes, especially since most of their dialogue is done via sign language and subtitles. Wise orangutan Maurice is back as the tribe’s teacher. Hothead Koba (Toby Kebbell) is willing to lie, cheat and steal to wage war against the humans. Caesar’s oldest son, Blue Eyes (Nick Thurston), is torn between obeying his father and following the militant Koba. Cornelia, Caesar’s ill wife, is sweet and caring, and has just given birth to an infant son.

All of this is why the apes’ storyline is more interesting than the humans, a big part of which consists of leader Dreyfus (Gary Oldman) trash-talking the apes as “dumb animals.” The ape characters are much more three-dimensional than the humans, and the demise of the friendship between Caesar and Koba is heartbreaking.

But the ultimate goal of Caesar and Malcolm is the same — to protect their family and try to keep the peace. Unfortunately, hate wins out here, which culminates in some fierce battle scenes between apes and humans (and in some cases, apes and apes).

And the visuals are terrific. The apes’ woodland, cliff-side dwelling is at first peaceful and serene, even with its visages of pre-apocalyptic life — abandoned cars, a deteriorating “76” gas station. The abandoned city of San Francisco includes locales like Market Street and a massive clock tower (I kept wishing I knew the city better so I could place the settings!), all crumbling and overgrown with weeds a la “Life After People” or NBC’s “Revolution.” I especially love the powerful image of apes riding horses and brandishing weapons.

This second installment of the “Planet of the Apes” franchise is even better than the first, and sets things up for the third movie, once again directed by Reeves, hitting theaters in 2016.

Sex/Nudity: An ape couple caress and hug each other. A human couple are shown hugging and sleeping next to each other.

Violence/Gore: This movie really pushes the PG-13 envelope in the way of guns and violence, and the body count is high, with a few main characters dying or appearing to have died. Apes ride horses and storm a human community with guns blazing. An ape character is determined to start a war with humans, and both humans and apes are crushed, shot at, set on fire and, in a few instances, thrown to their deaths. Two apes engage in a fight that ends in tragedy. Humans are rounded up by apes and tortured (mostly off camera). Apes who don’t agree with their leader are imprisoned. A huge bear attacks an ape in the woods.

Drugs/Alcohol: Adults drink alcohol, and offer it to an ape.

Which Kids Will Like It? Kids 13 and older who liked the first movie or sci-fi movies with lots of action.

Will Grownups Like It? “Dawn of the Planet of the Apes” is at turns, surprisingly touching, heartbreaking, sweet and violent. I loved it.