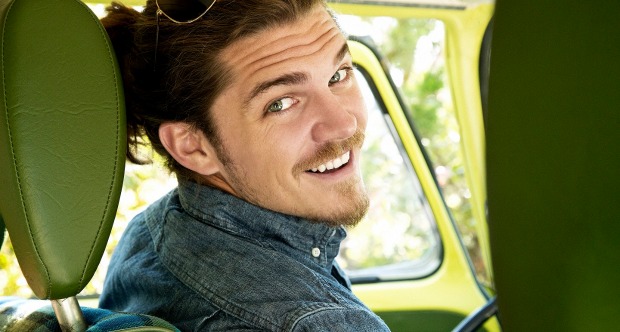 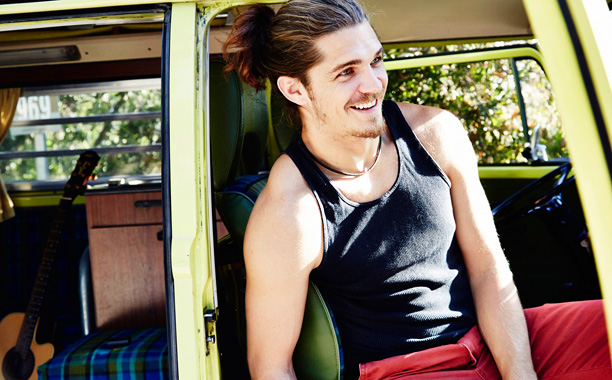 EDITORS: Buy this feature and image gallery in our Shop! Lots of other great editorial content there, too.

Malcolm Freberg was one of the most popular contestants on the hit CBS television series, “Survivor.” He recently started a new venture, “Wayfaring,” which can be seen on the Internet and through AOL. I had a chance to talk with him about this unique venture.

“Wayfaring” is a real-time 20-day road trip that started on July 1. We have no control over where we go or what we do. It’s left up to a live audience vote via social media.  Where we drive every morning is up to you, where we go every day is up to you and it’s freaking terrifying. (laughs)

Were there any adventures where you said, “No, I won’t do this”?

I wasn’t completely involved in the planning process, but the producers sat me down to ask me what the limits are. I told them no permanent physical scarring, so you can’t brand me or tattoo me. Now, emotional scarring, I’ll hire a therapist and get over that. That’s the only rule.

Have you always been a risk taker? I see you as the kid who climbed to the top of the tree when his parents weren’t looking.

Years have come off my mother’s life for what I’ve done to her over the last 20+ years of my life. I was always the kid who said, “It’s high, I want to climb it. It goes fast, I want to play on it,” and “Oh mom said no, now I definitely want to do it.” “Wayfaring” is me being an overgrown child. Except now we’re going to broadcast it through the Internet.

We hope you get in trouble so someone says to you, “Would you jump off a bridge if someone told you?” and you’d say, “Well, yeah.”

If you told me to jump off the bridge, I’d tell you that the bridge isn’t high enough. Make it higher and come back. (laughs)

You raised part of the money for this show through Kickstarter. How did it feel when your “Survivor” fans came through for you?

Gratifying. We tossed out the idea for a Kickstarter campaign, and what we asked for wasn’t all of the funding, just the last portion. We thought the idea for the show was awesome, but we didn’t know how everybody else was going to react to it. It was really gratifying, and “Survivor” fans have been the best about it. We’re definitely grateful.

What happened to you after “Survivor” until now?

After “Survivor,” I was asked to do travel shows. I did “Survivor” because I loved “Survivor,” but for the travel shows, they wanted to make me miserable again. No. I met two of our lead producers on this show, and we decided to make “Wayfaring” interactive. Shows like “American Idol” are voting based, but they are just a popularity contest. We wanted something different. So once we realized we were able to make an episode every day, we said let’s do it.

The show is like those choose-your-own-adventure books, but we can’t leave it totally open. You don’t know what’s going to happen on the road. We might have a conversation with the clerk at the gas station and, I know the producers, they are going to make me say some embarrassing crap. It’s impromptu stuff, but you get the episode the very next day.

If the show is successful, will you go international?

We do have aspirations to take this international, and we have plans for the future that are more domestic and more fun if we pull this off, but I can’t quite get into it just yet. I need to keep the mystery!

How are you physically?

I did two seasons of “Survivor” back to back, with only two weeks in between. So for 90 some odd days, I was starving for 70 of them. I was always a bigger guy, muscular and pretty dashing (laughs) before all of that, and it wrecked me in a bad day. It’s been a year and a half now since we finished shooting, and I’ll never be as large as I once was. You can’t recover from a physical experience like that, but I am relatively fit.

That being said, on “Wayfaring,” I get three meals a day and clothes, but all of the crew – we’re on a budget, we’re a single indie crew – is used to the posh Hollywood studios, so they are the ones that will be suffering. This is easy compared to the last time I was on television.

I have to ask you about your Twitter saying, “We are here to laugh at the odds and live our lives so well that Death will tremble to take us.” Have you always believed in this saying?

It’s a recent discovery. I’m a words guy. I’ve done some writing. Some people like art. I’ve always been a reader. That saying struck a chord, and it’s never coming off my Twitter profile. From an ideological standpoint – not to get all philosophical or wax poetic – we should live every day like it’s a gift. We shouldn’t be afraid of death; it’s going to happen.

We’ve gotten massively positive support. This show is for you guys as much as it’s for us. It’s supposed to be all of our adventures. Torture me if you want to, I don’t care, but let’s just have some fun this July.