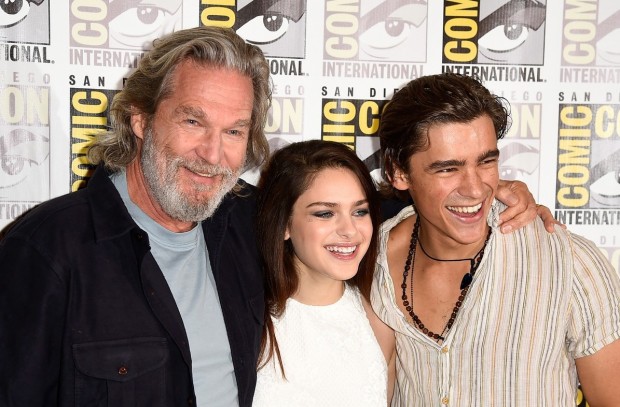 “The Giver” is the quiet heart and soul amidst the bombastic, cartoon craziness that is Comic-Con. The film – adapted from Lois Lowry’s 1993 teenage dystopian novel, so polarizing that it’s mandatory reading for some middle schoolers but banned from certain bookshelves – arrives in theaters on August 15.

Questions at the mid-day panel focused mainly on Lowry, despite the way-hotter-in-person-than-in-the-trailer Brenton Thwaites, sitting pretty with his counterpart, Odeya Rush, who looks like the love-child of Mila Kunis and Chloe Grace Moretz. Jeff Bridges, always seemingly in a good mood, received some obvious ‘The Dude’ references thrown his way with light chuckles.

In case you weren’t able to make it through the massive lines of thousands of fans in San Diego, here are a few snippets from the panel.

Lowry, on the story’s appeal for teachers: “There’s more to [the story] than adventure, but I did originally write it as just an exciting adventure. It was only afterward that it arose as a food-for-thought story. I think the best books raise questions rather then answer them. That’s probably why teachers like it so much.”

Bridges, on the controversial story and lengthy development: “Originally, I wanted to direct my father in this [Lloyd Bridges, who passed away in 1998]. I thought it’d be an easy one to get made, but we’ve been trying for 18 years. It really did prove difficult. It proved controversial. Lois and I were at a banned book conference recently, and the book was there. It has scared some financiers away, but that’s what excited me. I’m so glad The Weinstein Company and Walden had the courage to put it out.”

Lowry, on two particularly controversial scenes: “Often people take things out of context. The two scenes that [put this book into controversial territory] are when the father kills the infant, and when the 12-year-old bathes an old woman, which they took out of the film. Unfortunate, because I wanted to play that role,” she said, perhaps not entirely joking.

Nikki Silver, Producer, on the Dystopian trend: “There finally came an appetite of this whole genre of dystopian fiction. It was a combination of timing [after other films, whose stories were most likely influenced by Lowry’s, paved the cinematic way] and Lois’s continual faith in us.”

Thwaites, on his character Jonas: “I read the screenplay before the book and was really attracted to Jonas’ story, how he learned such deep and visceral stories that then teach him to follow his instincts and his heart.”

Lowry, on a conflict that wasn’t in the book: “[After watching Meryl Streep perform], I realized I wanted to go back and re-write the book and make the Chief Elder what Meryl makes it into – so complex and so fascinating. The conflict between the spiritual leader, The Giver, and the political leader, The Chief Elder, was not actually in the book.”

Silver, on the professionalism of the veteran actors. “On set, everyone would just stop and watch Meryl and Jeff. They were incredible.”