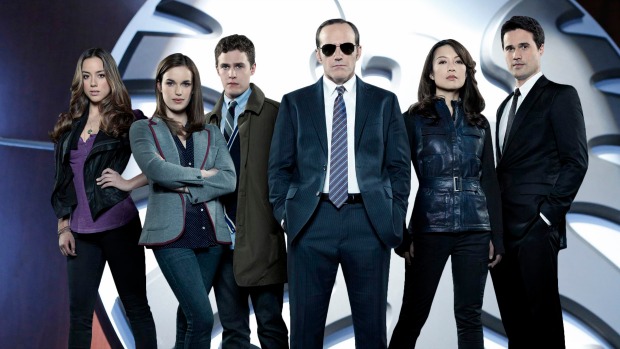 Well, today’s been a good news day in the comic and sci-fi/fantasy worlds. First, HBO announced the newest cast to be added to the ever-growing lot at “Game of Thrones.” Then, Browncoats were all shiny and giddy with excitement as it was announced the original cast of Firefly will reunite for Firefly Online, a multi-player role-playing game to debut soon on smartphones and tablets. Now Marvel has announced the newest additions to the second season of “Marvel’s Agents of SHIELD.”

While the second season just starting filming yesterday, news broke out at Comic-Con today that Lucy Lawless, Reed Diamond, and newcomer Nick Blood (whose name should be its own Marvel character) will join our HYDRA and SHIELD agents for the battle against good and evil. Since Coulson’s looking to rebuild SHIELD, this is a handy way to bring in new blood… Get it, blood? Nick Blood? :::rimshot::: I’m here all week, folks.

Lucy Lawless (most famously known as Xena: Warrior Princess) will play Isabelle Hartley, a SHIELD vet who may or may not have worked a stint at Benihana, as she purportedly has a very special set of skills with a knife. (I say, can we get Liam Neeson on this show also?!) Victoria Hand made reference to a love interest named Isabelle – could this be her? No word if Lawless will be blonde or brunette on the show.

Nick Blood joins the cast from across the pond as Lance Hunter, a mercenary who helps out Coulson and his gang. The character of Hunter is best known as the director of STRIKE (Special Tactical Reserve for International Key Emergencies – don’t you love/hate all these acronyms?!). STRIKE is a British intelligence agency (where’s MI5?) that assisted Captain America. Presumably this will be Hunter’s origin story as the actor, Blood, who is 32, is probably too young to oversee an entire counter-terrorism agency replete with acronyms.

Coulson and what’s left of SHIELD will be on the run from Daniel Whitehall, aka Kraken. “Homicide: Life on the Streets” and “Dollhouse” alum Reed Diamond takes on the role of this sinister HYDRA villain who dons a mask that covers him in body armor. Hope we get to see those baby blues on that pretty face of his.

The second season of “SHIELD” will premiere on Tuesday, September 23 at 9pm on ABC.