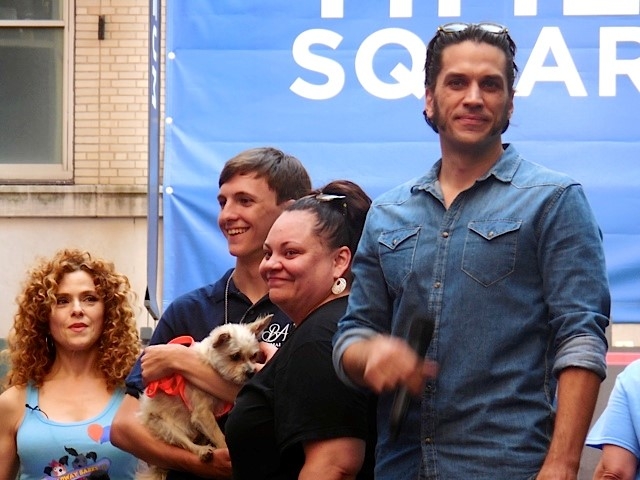 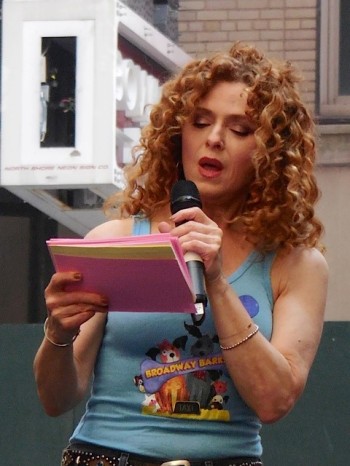 James Franco cuddled with a kitty in Shubert Alley Saturday afternoon. “I’m a cat person,” he admitted, looking enamored of the adorable kitten he held gingerly. Franco co-hosted Broadway Barks, the annual pet adoption event that took place in the alley between 44th and 45th Streets in the heart of the theater district. Later Franco stroked a portly Shih Tzu while Jessie Mueller, the Tony winner for “Beautiful – The Carol King Musical,” sang “Chains of Love” surrounded by fluffy puppies.

The ubiquitous actor-writer-director-artist-professor, took a break from his starring role in “Of Mice and Men” to co-host the annual pet adoption event with theater legend Bernadette Peters, who founded the event with Mary Tyler Moore. And he did his hosting duties for the doggie/cat event with more energy and passion than when he hosted the Oscars with Anne Hathaway a few years back.

This is the 16th anniversary of the organization, which has been successful in finding homes for rescue and shelter pets, most with very sad stories. This event attracts the hottest stars on Broadway, who cajole and plead with the crowd to take home a worthy pet.

Six-time Tony winner Audra McDonald, a big animal lover, who has a scene in “Lady Day at Emerson Bar & Grill” with an adorable mini-mix rescue pup, created major excitement when she made an appearance between her two shows. “How do you even do that?” Franco asked, in awe of the Broadway star. He meant, ‘How do you win that many Tonys?’

It takes a lot to upstage the popular McDonald, but an adorable mutt with a sad story of being abandoned by his hard-hearted owner did just that.

The festivities began at 3 p.m. when all the adoptable dogs and cats were available for a meet and greet. Then from 5 to 6:30 p.m., Broadway celebrities took to the stage to introduce the adoptable animals from the various shelters and to encourage the audience to fill out application papers.