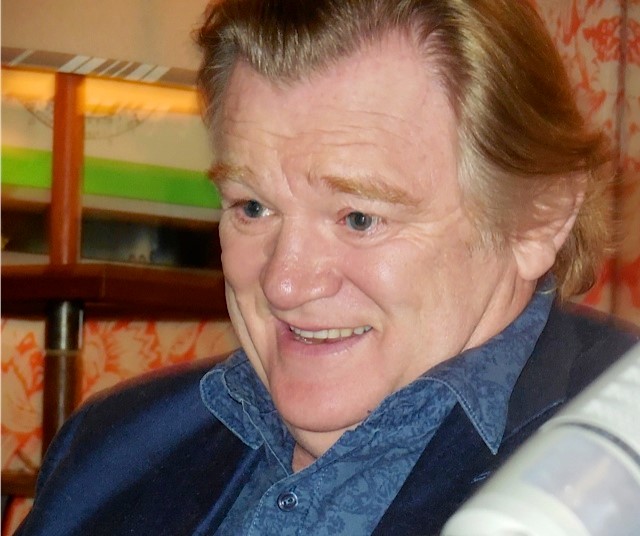 “Calvary,” John Michael McDonagh’s new bleak, comic drama, begins with a good-hearted Irish priest, Father James (Brendan Gleeson) giving confession to an anonymous voice who tells the priest he is going to murder him in a week. This is revenge for years of sexual abuse the confessor suffered from pedophile priests; the murder only has meaning, the confessor says, if the victim is a blameless, good priest.

In the seven days he has to settle his affairs, Father James confronts an oddball assortment of sinners in the rural village, set in Sligo, on Ireland’s West Coast. The priest helps village eccentrics with their personal, financial and sexual problems, while at the same time he tries to suss out who is planning to murder him and talk him/her out of it. Meanwhile he attempts to connect with his suicidal prone daughter (Kelly Reilly), who feels he abandoned her when he joined the priesthood after her mother’s death. “Calvary” is as much a whodunit as a philosophical meditation on faith and personal responsibility.

McDonagh’s breakout film, “The Guard,” was Ireland’s most successful indie film and starred Gleeson as a feckless cop who reluctantly takes on drug smugglers. “Calvary” is even better, richer and funnier. The director’s grim outlook must run in the family: his brother is Martin McDonagh, a playwright (“The Cripple of Inishmaan”) and film writer/director (“In Bruges” and the Academy-Award winning 2006 short film “Six Shooter”), whose works are also violent, macabre and hilarious.

Reilly added, “And it doesn’t cost as much money.”

McDonagh agreed. “It’s just one actor, and some good dialogue that will hopefully nail people to their seats and they’ll want to know what the conclusion is.”

The director said it also shook audiences out of the perception they were going to get “The Guard” II. “When it was screened at Sundance, audiences would laugh and then go, ‘Oh God, it’s going to get serious,’ and then it gets funny again. But then people are completely wrong-footed right from the opening scene, so you’re setting the tone for that entire movie right there in the first piece.”

Asked if the the feelings and issues of the film that dealt with the Catholic Church and sex abuse were unfamiliar to him, Gleeson replied, “No, not really. I grew up in Ireland see?”

What intrigued him more was the scenario of an innocent, humane priest who is unfairly targeted and made to suffer.

Gleeson said he was fascinated with his character’s dilemma. He referenced two priests he knew of that were wrongly accused of pedophilia. “God almighty! Imagine having to commit your life to something that is positive and then to be besmirched with this. You never recover from that kind of accusation. The way people think of you, you know, is shattered forever.”

McDonagh added, “The initial idea was just to tell a story about a genuinely good person and not be ironic cause there’s too much irony in movies these days. I’m guilty of it myself, but the intention was deliberately to get away from that.” There were many films about the Catholic Church scandals and he wanted something different. “Let’s make a movie about a good preacher instead of a bad one. It was a way of flipping it on its head. So that was the initial discussion and it just grew from there.”

The film is darker than “The Guard,” but when asked if it was a challenge balancing the humor with the heavy subject matter, the director replied, “I don’t think too much about it when I’m writing. I write fairly quickly. I like to get done with it as quickly as possible because it’s a very boring career sitting in a room there alone three or four hours every day.”

“You’re talking to a bunch of writers,” Gleeson reminded him.

The director has a non-traditional casting approach.  “I want an easy life. I like to cast actors who I think are probably quite decent people and who drink a lot, and Kelly fit that really.”

“I sensed something,” McDonagh replied slyly.

Gleeson who has a central and crucial scene with his son, Domhnall, who plays a psychotic serial killer, was asked what it was like working with his son. “We were in the Harry Potter thing, just very briefly. He announced my death, I think, which was a dream come true to him. And we had done a short with Martin McDonagh six years ago, which won the Oscar.”

“That was a low ebb in my life,” McDonagh said dourly.

“Yes, I know,” Gleeson commiserated, adding, “That one spurred all this kind of creative genius in John.”

McDonagh said one day while shooting “Calvary,” his brother Martin turned up on set. “He hadn’t read the script, and he watched the monitor and turned to me and said, ‘I thought this was supposed to be a comedy?’ Which was the way I was promoting it at the time.”

He is not a writer who sweats over the script. “I never suffer from writer’s block because I’m not going to sit there with nothing to do. I mean, you can go to the pub. You don’t have to sit in the room.”

Another trick he has is that he always has the first 20 and last 20 minutes of the script worked out in his head before he begins to write. “I know where I’m heading in the last act so it’s more or less working out that middle section for me. And I usually write one day, next day look at what I’ve written, think about it, write the next day, and if I go to sit down and I have no ideas, I just get back up and do something else.”

He finds inspiration in music, films and even bad scenes in movies that he fantasizes rewriting.

McDonagh doesn’t consider being a writer a calling. “I don’t think of it in that way. I just knew I could never do a 9 to 5 job, and I wanted a job where you get up at half twelve in the afternoon and you didn’t have to say, ‘Yes, sir’ to anybody, so that was why I became a writer basically.”

His next film concludes what is now the trilogy and is called “The Lame Shall Enter First,” which he stole from a Flannery O’Connor short story title. He already has a beginning and end and will begin to write next year.

“It’s going to be about a spectacularly abusive paraplegic, so Brendan will be in a wheelchair in south London. He hates anybody who’s able bodied, so he basically hates the entirety of society, which I suppose I guess comes from me.” The film will also have a crime element. “He tries to get his life in order by solving the murder of one of his disabled friends because he doesn’t think the police are investigating it properly.”

When Gleeson was asked if he already began preparing for the role, McDonagh cracked, “He’s been sitting around a lot.”

It turns out the Irish actor has thought about the role. “I like to believe that I have fantastic reservoirs of bile that I can kind of tap into easily enough, so crashing about into things and not getting access to things should hone it beautifully.”