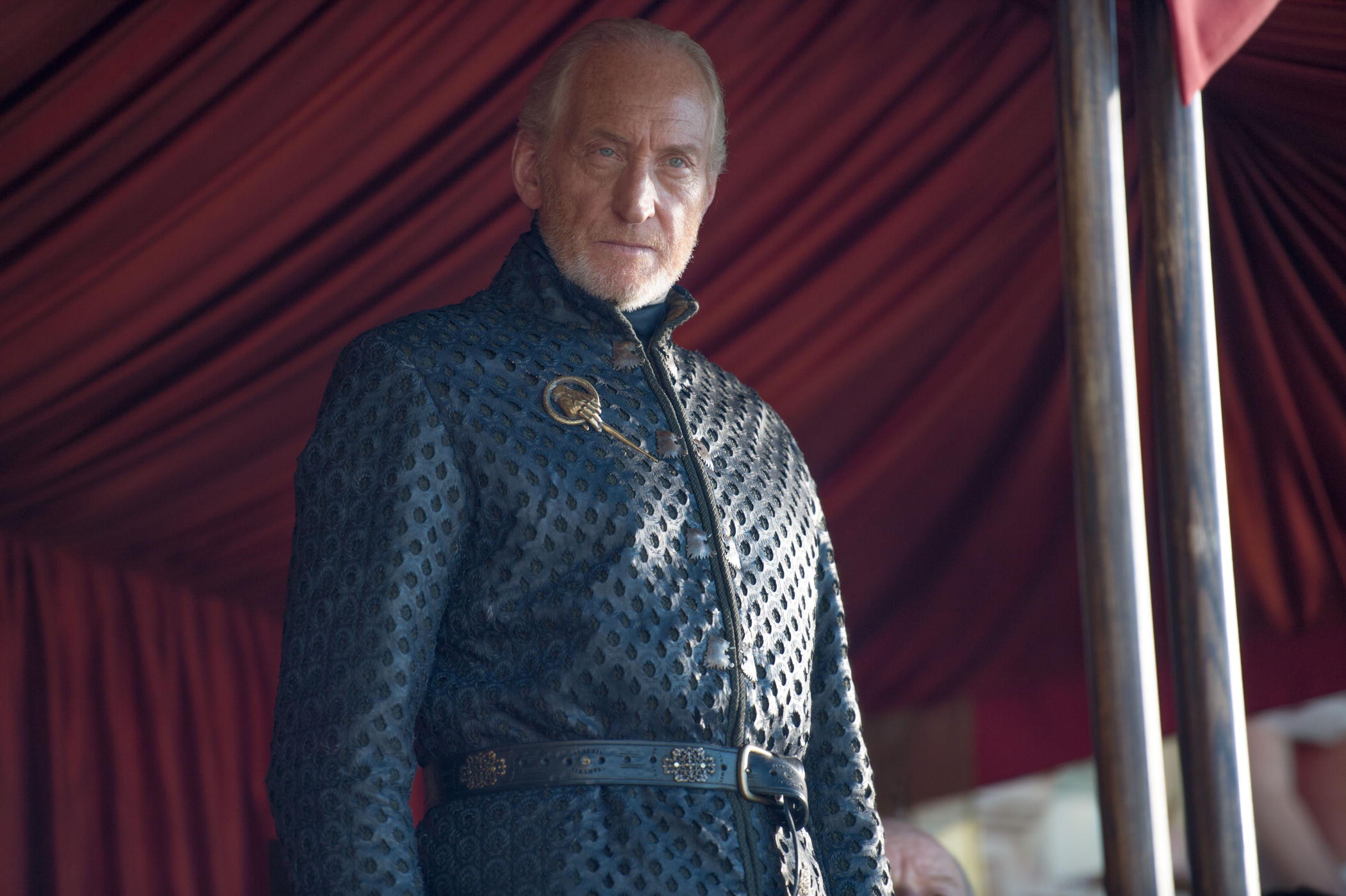 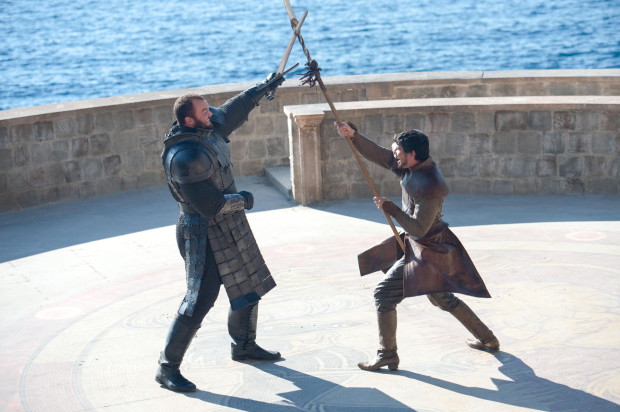 Can you name that tune in three burps? Our highly-anticipated episode of “Game of Thrones” starts off with the Westeros version of Name That Tune as a bar wench tries to burp out a tune for the others to guess. This unknown wench seems to have a featured role in this opening scene, which surely suggests she is a redshirt and will die before the episode’s end.

She didn’t even have to wait until the end.

The Wildlings and the Thenn invade the village, pillaging and plundering as they go. Even Ygritte gets in a few kills, but when she happens upon Gilly and Sam Jr., she hesitates and then motions for her to stay quiet while she leaves to pillage some more. Nevermind that she doesn’t close the door all the way and a Thenn can stumble upon them. 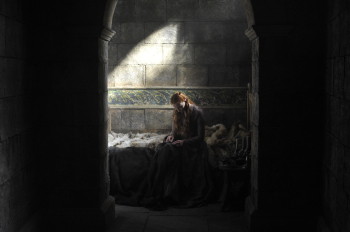 The guys over at Castle Black are all in a tizzy that they could do nothing to help while Sam is already mourning the loss of Gilly, but then another Knight of the Black Watch reminds him she survived a Whitewalker, and odds are forever in her favor that she survived this as well.

Over in Meereen, a gorgeous group of Unsullied disrobe to take a bath in the lake while on the other side the ladies are doing their wash – naked. Grey Worm stares greedily at Missandei as she washes her garments. You wonder if the Phantom Limb Syndrome applies here. When Missandei sees him he can’t look away at first, but out of respect he finally does.

I’m not sure what happened to the dozen or so men who were bathing also and why they weren’t ogling at the other women doing the wash, but I guess we aren’t supposed to care.

Grey Worm later apologizes to Missandei, but she says she’s glad he saw her. She tells him she’s sorry he was castrated but he tells her he’s not sorry because if that didn’t happen he wouldn’t have become Unsullied and ultimately he would not have met her. And in his own way, he just romanced the pants off her. 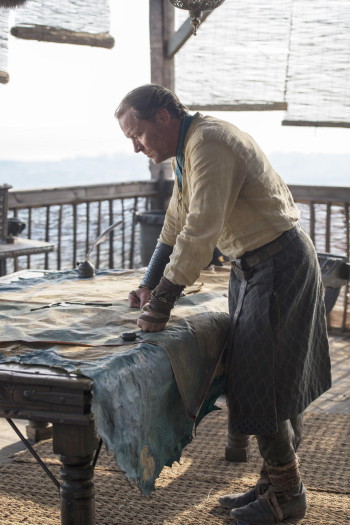 Ramsey Snow tells Reek he must pretend to be Theon Greyjoy and con his father’s men into surrendering to Snow. He does so and you wonder if Reek will have that Booyeah! moment where he becomes Theon again and finds his courage and exacts revenge against Ramsey.

There’s a Vale tribunal (okay, it’s just the nobles) looking into the “suicide” of mad-starkers-crazy Aunt Lysa, with all fingers pointing guilty at Lord Baelish. When he thinks Sansa is going to spill the beans, he is pleasantly surprised (and looks at her lustily) when she tells the tribunal Baelish is innocent.

This girl figures she’s better off with this guy then shuffled around Westeros again – I mean, look what happened the last time. Better the devil you know than the devil you don’t. Sansa is finally taking her life into her own hands, even if it is with Baelish at her side. When we see her next, her costume is decidedly more dark, adult and sexier than her previous pastel-colored innocent gowns.

Oh poor Ser Jorah Mormont. He had his moment of triumph in the last episode, but his elation does not last long when word comes that he has received a pardon for passing along information about Dany – a pardon that was given before he ever joined her ranks.

When Dany finds out, she banishes Ser Jorah from her presence and her life. The guy was already banished to the Friend Zone, but now it’s much worse. Poor guy.

Arya and The Hound make it to the Eyrie only to find out her Aunt Lysa died just a few days before. This sends Arya into hysterics – hysterical laughter, that is. Can’t the girl catch a break? She always seems to be a day late (literally) and a dollar short. We don’t get to see Arya and Sansa reunite, so I hope something doesn’t happen before then or that they miss each other by minutes.

Finally, the Trial by Combat has come! The Mountain (Sandor Clegane) and the Viper (Oberyn Martell) take to the pit to fight. Oberyn shows off his waterdancing skills so you pretty much know this isn’t going to end well for him.

As he channels his inner Princess Bride – My name is Inigo Montoya Oberyn Martell. You killed my father sister and her children. Prepare to die! – it looks like he might win. Tyrion and Jaime try to stifle their smiles, but instead of finishing off the Mountain, Oberyn gets a little too cocky demanding the fallen Mountain say his sister’s name and admit to killing her. Unfortunately, a guy with that much armour who is that large takes a little more than a spear to kill him. He does admit to killing Oberyn’s sister, just not in the way Oberyn was hoping.

As he confesses, he gouges Oberyn’s eyes out before he crushes his skull, splattering brain matter all over of the pavement. Tyrion’s champion has lost and Tyrion is sentenced to death by his own father, Tywin.

What happens now? We can’t have Peter Dinklage unemployed! Will Jaime finally help his little brother escape? Or perhaps someone else will come to his aid? Only two episodes left!