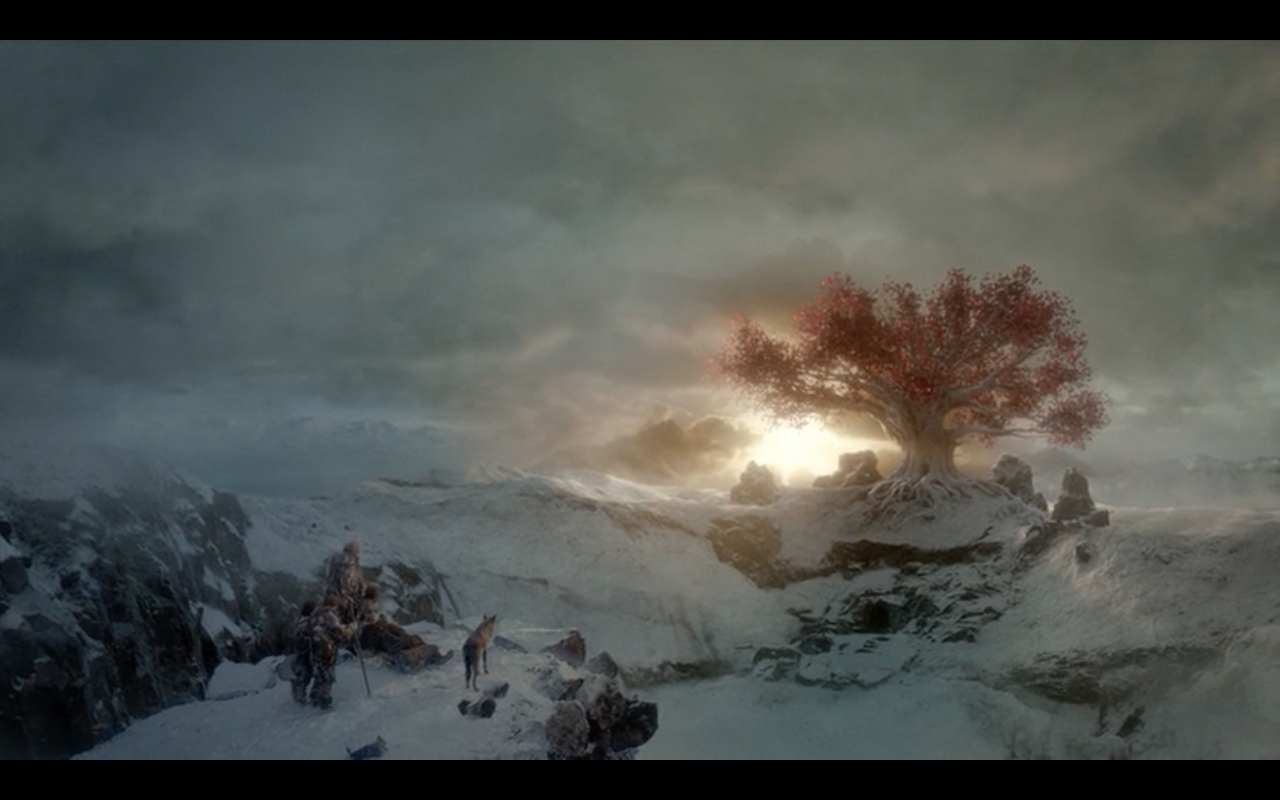 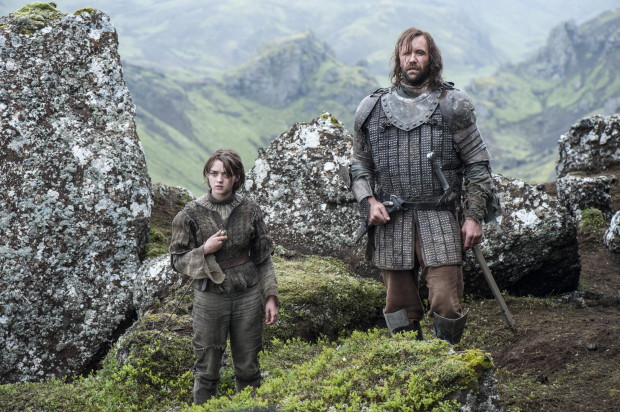 I would end my post right there, but I’m afraid my editor would not be too pleased with me. After I recovered from the season 4 finale of “Game of Thrones” and removed myself from fetal position from under my desk, I was able to sit down and write tonight’s post.

Sure, this was no Red Wedding, and technically it’s just the middle of the book, but it’s still exciting all the same. Where do I begin? 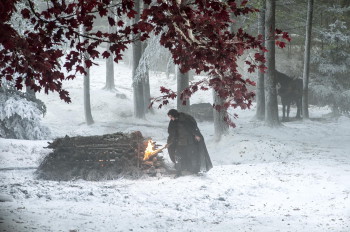 Last week Jon surely was a dead man walking as he left the confines of Castle Black to head into the forest to steer negotiations amongst Mance Rayder and the Freefolk. They drink to Ygritte and to those who died on both sides. All Mance wants is safe passage through the tunnels to get away from that darn winter that is always coming and he won’t kill the handful of men that is left of the Night’s Watch.

Before things can go any further, the Freefolk are attacked from all sides by Stannis Baratheon and his army – an army that is on horse, better trained, and not recovering from a massive bloodbath mere hours before. Jon saves Mance from certain death after Stannis asks him what Ned Stark would have done in his place. Mance is taken into custody.

At Tormund’s “suggestion,” Jon takes Ygritte beyond the Wall to the “real north” and builds a funeral pyre, shedding a few tears along the way. #JonSnowCryingIsHotttt

While Grand Maester Pycelle has written off The Mountain as good as dead on the account Oberyn’s spear was laced with poison when he stabbed him, Qyburn is doing his best to save him. Cersei never liked Pycelle anyway and sends the guy off to Starbucks while she gives Qyburn full reign in the laboratory. He works his special magic on him, so we’re sure to see The Hound’s vicious brother again. I think Qyburn’s last name might be Fronk-en-steen! (It would have been awesome if they had Gene Wilder play this role originally!) 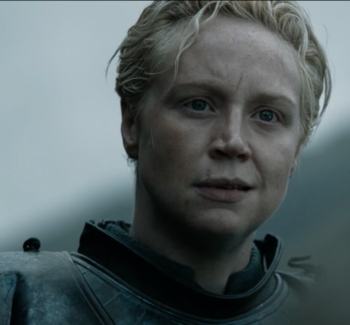 Happy Father’s Day to Tywin Lannister! All your kids hate you. There just isn’t a Hallmark card made for dads like you. Cersei and he argue over her impending nuptials to Loras Tyrell. She tells him the truth about she and Jaime. Tywin doesn’t want to believe it. Sure he’s heard the rumors, but now it’s been confirmed by his own daughter. Better than getting another tie, yeah, Tywin? #BestDadEver

After her confessional with dad, Cersei seeks out Jaime more to stick it to dad one more time than for any real passion for her brother. Also, she wants Jaime on her side over Tyrion’s, but Jaime is the only Lannister fond of their little brother so while he’ll give as good as he gets, his loyalties lie elsewhere. Glad this love scene was brief! #stillgross

Over in Meereen, Dany grants audience to a man who cradles in his arms the skeleton of his daughter, killed by one of Dany’s dragons who hasn’t been seen in days. Because of this atrocity, Dany makes the decision to lock up the other two, thereby enslaving her own children in chains. Her entire fight was to free those who were enslaved, and she is heartbroken that she has to lock up her own. #HowToChainYourDragon 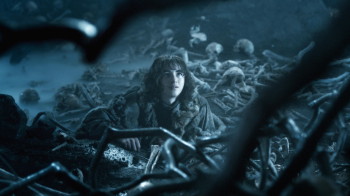 Jojen and Bran finally find the Weirwood they’ve spent how many seasons searching for? There is a moment of tranquility as they stare upon its crimson leaves and ivory branches. But hey, moment’s over and they are put upon by skeletal creatures that aren’t quite Wights but scary all the same. Summer saves Bran as he wargs into Hodor who then flings those attacking him easily off his back, but things don’t look so well for Jojen. Things are taking a downturn quickly. Just as they are about to eat it, some little tree sprite lights them up, throwing fireballs at the creatures, saving the day. Meera has to sacrifice Jojen and make a run for it, but he was a goner anyway. They follow the sprite into the Westeros version of The Chamber of Secrets and find the sprites are called The Children. The Children remind me a little of the Dryads in David Eddings’ Belgariad series.

They find the Three-Eyed Raven who is now part-man, part-tree (Hodor, could you put Bran closer to the tree?!) He tells Bran that he will never walk again, but he will “fly”. #Wingsuit 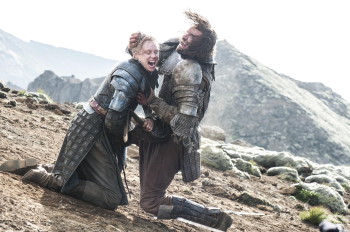 #Podwatch! The road trip continues as Pod and Brienne wake up in a dewy field, their horses gone. Now they have to walk to the Eyrie, but wait! Who’s that young girl playing with a sword? Do I get my wish of these two pairs meeting up? #WishGranted

Well, my wish is only partially granted as neither Pod and Arya nor Brienne and The Hound fall madly in love with each other. In fact, quite the opposite. After Brienne and Arya have a little bonding session over women and their swords, Brienne realizes who Arya is and The Hound thinks she’s there for the bounty on his head.

Never one to mince words, The Hound seems to be more of a father-protectorate to Arya in that moment than Tywin ever was to his children their entire lives. “Safety? Her aunt in the Eyrie is dead. Her mother’s dead. Her father’s dead. Her brother’s dead. Winterfell is a pile of rubble. There’s no safety. You don’t know that by now, you’re the wrong one to watch over her.” #verytrue

Instead of locking lips, Brienne and The Hound lock swords and it’s game on, bitches. What a great fight scene between these two! Brienne goes Mike Tyson on The Hound, biting off his ear and shows him what happens when a woman is PMSing and is without Midol or chocolate! 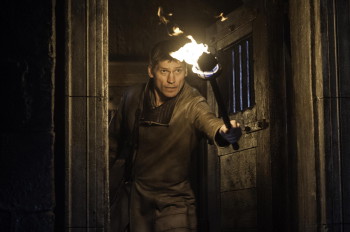 Tyrion is waiting for the end to come when his prison door opens. He thinks it’s the jailor, but it’s Jaime to the rescue! He has come to help Tyrion escape. With Varys, the two have secured passage for Tyrion on a ship bound to – well, who cares? It’s away from Kings Landing and that’s all we need to know. The two share a touching moment as they say goodbye. As I said, Jaime is the only Lannister who has ever shown Tyrion any compassion. #ILoveHateJaime

Before he meets up with Varys, Tyrion has a few things to get off his chest. He makes his way to his old bedchamber (but now is Tywin’s) when he finds Shae in his father’s bed! The betrayal is complete and Tyrion’s rage burns out of control as he and Shae tussle and he ends up strangling her with all the pain and hurt he feels. #GiveThisGuyAnEmmyAlready 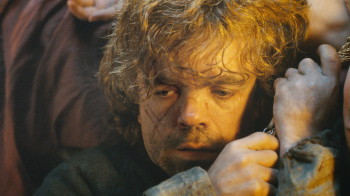 Varys must be getting ants in his pants waiting because Tyrion isn’t done yet. He grabs a crossbow off the wall and finds his dad in the privy with his pants down, literally. The King is sitting on his throne, so to speak. Tywin claims he never would have had him killed. He tells his dad he killed Shae and that he loved her. Tywin calls her a whore and Tyrion promises to fire the crossbow should he call her a whore again. Guess what? Tywin calls her a whore. Tyrion fires, not one, but two arrows into his dad and now he, too, is a Kingslayer.

Tyrion makes it to Varys and is hidden in a crate with air holes like he’s some sort of contraband animal, but hey that’s better than having your head on the chopping block. When Varys hears the toll of the bells signalling the king is gone (Ding-dong, the king is dead!), he thinks it might be wise if he gets out of dodge also. #goodidea 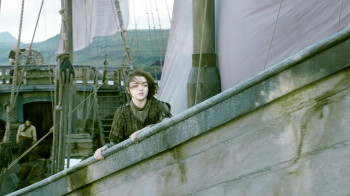 Arya journeys on alone and finds some ships at port. She buys passage on one with the iron coin she got from the Faceless Assassin back in Season 2. I was hoping she’d pull a Titanic moment on the ship’s bough, but I guess that might be on the blooper reel.

Maybe Arya’s ship and Tyrion’s ship and all of Dany’s ships will meet… in Pirates of the Caribbean (Pieces of) 8! #IdSeeThat

I thought the writers tied together the theme of “children” well throughout this finale. We got to see a little bit of everyone’s stories, but do I have to wait another year for Season 5?! #NotFair

What did you think? Tweet us @BeTheBuddha and @ReelLifeJane with your comments.