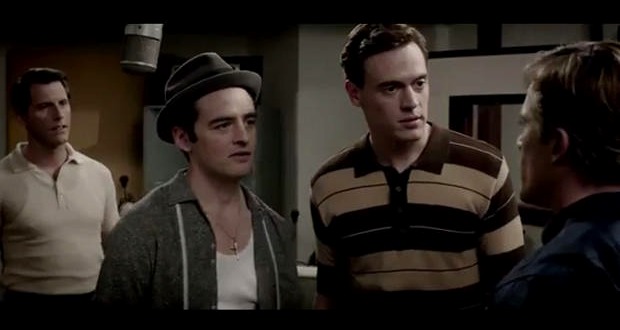 The jukebox musical “Jersey Boys” about 1960’s rock group the Four Seasons is still going strong on Broadway. Everywhere you turn in the theater district today there are posters for the hit show, probably to celebrate and tie in with its arrival on the big screen this weekend, helmed by legendary director Clint Eastwood. Back in 2006 when it opened, the musical won four Tony Awards, including for lead John Lloyd Young, who played Frankie Valli and who also stars in Eastwood’s screen version.

Fans who still swoon over Valli’s falsetto in catchy tunes like “Big Girls Don’t Cry,” “Can’t Take My Eyes Off You,” “Sherry” and “December 63 (Oh What a Night!),” all composed by Bob Gaudio, lesser known than Valli but a key reason for the group’s success, may be put off by Eastwood’s focus on the group’s personal drama, including their mob ties and less than admirable personal qualities. Still there are plenty of bouncy songs and stellar performances by the four stars – Young, Erich Bergen (Gaudio), Vincent Piazza (Tommy DeVito) and Michael Lomenda (Nick Massi) – to keep Four Seasons aficionados happy. (Christopher Walken as mobster Gyp DeCarlo is hilarious as always.)

Eastwood, screenwriters Marshall Brickman and Rick Elice, along with the four young stars who played the Four Seasons – except for Piazza, who is best known for playing Lucky Luciano in HBO’s “Boardwalk Empire,” performed in various stage versions of the musical across the country – promoted the film at a press conference at the Waldorf Astoria hotel recently. Almost all the questions were directed to the legendary director, whose drawl is a little slower at 84, but who is just as sharp and dryly humorous as ever. The young actors referred to their director as Mr. Eastwood.

Here are some edited highlights from the press event:

How in the world did you decide to do “Jersey Boys”?

Clint Eastwood: It seemed like something to do. (laughter) It’s funny because I hadn’t seen the play but I’d heard a lot about it over the years. Somebody said would you be interested in doing that, and I said I’d certainly be interested in looking at it. Then they sent me a script and it was by a very good writer, but I found out later through a series of events that that wasn’t the script of the play, so then I asked, where can I find that? A friend of mine, a gent said, I represent the guys who did that, Mr. Elice and Mr. Brinkman, so I said maybe I better look at that, because I figured only in Hollywood would somebody give you a script of something else when they have a script that’s a hit.

So I looked at that. I liked it very much, and I went and saw three different versions of the play in New York, San Francisco and Los Angeles and saw all these wonderful actors and thought, what a nice project to be doing. And that’s the last thing I have to say this evening. (laughter).

Have you ever met Frankie Valli? How challenging was it to make the film from the Broadway play?

CE: Well I met Frankie Valli years ago, in passing. I was never a fan of music of that particular era. I came along before all that, but I did like the Four Seasons a lot. I thought their music was far superior (to the other groups of the day). I think ‘Can’t Take My Eyes Off You’ is one of the real classic songs of that era and would have been a classic song in the 40’s, 50’s, or 30’s, or any time in history. All of their stuff was very energetic music and great fun.

They have great fun songs and certainly superior for that particular time in history, so it was a challenge to do it, a pleasant challenge, and to work with actors who had actually formulated, had a great influence on the play, on its run throughout the country. It was great to be using the original people.

What were the challenges in bringing this from the stage to the big screen?

CE: I didn’t think it was too much of a challenge. You can open it up, the stage play. I think it’s a wonderful play and it had a lot of excitement in it, but I could push it more from the realistic angle.

There are a lot of things that you can do in a movie that you can’t do on the stage. They have to keep things moving and be very practical, so you just try to open it up and give it a certain realism maybe.

The movie tells the story of the Four Seasons from the viewpoint of each of the performers in the group, who were all Italian-Americans from New Jersey. How did you relate to them?

Well, I try to relate to the whole thing… I went to a school which was about half Italian American in an era that was quite interesting in Oakland, California, so I understand something about that community.

The film touched on this, that you don’t forgive a lot of things (in that community.) Maybe clichés, maybe not, but the Italian-American community where you get on the bad side and you’re on the bad side forever. I don’t know if that’s true nowadays, but there is sort of a historical feeling about that that I related to.

In one scene, the television is on and there’s a scene with you from your television series “Rawhide.” How did that come about, and did the struggle of the Four Seasons resonate with you and your struggles as a young actor?

You’re talking about my Hitchcock moment? OK that was actually Erich’s (Bergen) idea… (The group is sitting down watching television and ‘Rawhide’ is on.) I started thinking, ‘Yeah, it could be,’ because after all, that was about the right timing, so I thought maybe… Then I put it out of my mind, but somebody who works for me just went ahead and did it (put it in). Afterwards I said, ‘Ok, I’ll live with that.’

John Lloyd Young, you must have good story about being cast.

John Lloyd Young: I had been in the original cast, the first two years, and had been away from the show for several years and had been invited back to do the role again in 2012-2013 on Broadway. During that return to the stage, I caught wind that Mr. Eastwood had been attached to the movie and was going around and watching the companies around the country.

I also caught wind that he was going to be interviewed by Darren Aronofsky at the Tribeca Film Festival on a Saturday afternoon. I was doing one show a day, not the matinees on two show days, so I had that Saturday free and my manager and I went and watched the interview with Aronofsky. (He introduced himself to the director at the interview.)

We had a hunch that maybe he might be at the matinee the next day where I was performing… In the wings before I was about to start work, we heard that there was a standing ovation in the audience because they had seen Clint Eastwood walk into the audience, so I knew he was going to be there the whole performance.

It was a joyful performance because I felt that no matter what would happen with the movie, how great was it to have somebody who has dominion in his world in Hollywood see me in the one thing in my life so far that I know I have dominion over, which is this role, this show, this production on stage. Then a month later, the next time I saw him was on the set.

Talk about casting your other leads.

CE: I got a standing ovation for actually going to the men’s room when I was at the Broadway show. That’s the first time and probably the last time that will happen. Anyway, I enjoyed the play so much, and by that time I had seen Michael (Lomenda) from the San Francisco one. Erich partly I attributed to Bob Gaudio, because I said, of all the people who have played you, who do you think was the best?

Erich: I was the second choice.

CE: But he was deceased at that time. We couldn’t get him. (Laughs). And Vince (Piazza) … I had never seen ‘Boardwalk Empire’ at that particular time, but he did come in and do an audition, and he was just spectacular in the audition. So I said, okay I think we’ve got the guys here. I’d seen three boys and a lot of good actors in all of them, but it seemed like the group just all came together. Like Michael said, 1200 performances, that’s experience you just cannot buy.