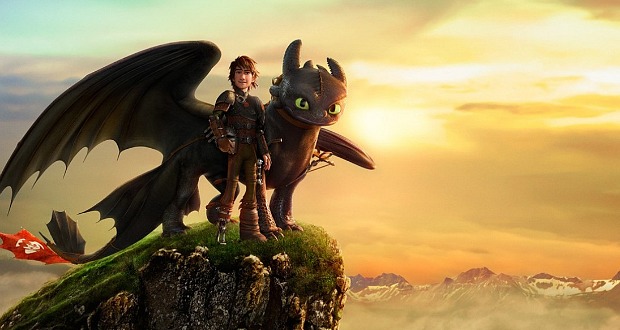 Above Images: “How To Train Your Dragon 2”

The impressively-named Hiccup Horrendous Haddock III, hero and protagonist of the tale, is a disappointingly nerdy teenager, eager to earn the respect and admiration of his clan. Unfortunately, this involves killing the dreaded dragons, something Hiccup’s not very good at. But when he finally manages to shoot one down, it’s purely due to luck and happenstance.

The plot, the characters and the animation are gripping, to say the least, and probably why my kids have watched the movie umpteen times! However, here are my top 5 reasons for letting them watch it as many times as they like!

Life in the Viking village has always been centered around fear and hatred of the dragons. The macho Viking warriors believe that killing the dragons is necessary for their survival. But tender-hearted Hiccup proves them all wrong. He cannot bring himself to kill Toothless, the much-dreaded Night Fury dragon, and quickly realizes that not only can the two species live in harmony, but also that this peace is important for the survival of both.

He discovers that mutual distrust is the only barrier that prevents Vikings and dragons from peaceful co-existence and strives to make everyone see the error of their ways. This optimistic message certainly appealed to my kids and probably to the hordes of young fans as well who loved “How to Train Your Dragon.”

The movie is completely entertaining, but the story incorporates several valuable life lessons for kids, including loyalty to one’s family, friends and clan; the importance of teamwork in achieving goals; how conceit and selfish ambition never really pay off; and how love really CAN conquer all.

Hiccup is the epitome, or near-epitome of all the values the movie espouses – he is loyal, humble and respectful of family and community ties; his actions are dictated by love for his father and his commitment to bringing about peace between the warring species.

“How to Train Your Dragon” has some endearing and heartwarming strains of humor that kids seem to appreciate. Most of the humor originates in the personalities of the characters. Gobber, for instance, gets loads of laughs as he demonstrates the art and science of dragon fighting to young Vikings; his job is complicated by the fact that he has several limbs missing and is not the most inspiring example for joining the war against dragons.

Another memorable scene is the one in which Toothless chases the sunlight off Hiccup’s hammer, exactly like a cat with a laser pointer. And in another scene, you see Toothless beg Hiccup for food, just like a dog. My kids consider this the last word in cuteness, and I must say I agree!

The first encounter between Hiccup and Toothless does not take place under the happiest of circumstances, but they soon overcome their initial fear and loathing to forge an unbreakable bond. Hiccup names his new best friend “Toothless” because of his retractable teeth.

My kids found Toothless to be simply adorable; you’d never think a fire-breathing dragon could be this cute! Both rescue each other when danger threatens, but that’s par for the course. More importantly, Toothless helps Hiccup understand dragon psychology so he can befriend dragons and subdue them with tickles during training. This cross-species friendship eventually leads to better relations between Vikings and dragons.

“How to Train Your Dragon” is a coming-of-age story in the truest sense of the term. Hiccup, the socially awkward misfit, is ostracized by his clan for being perceived as weak and reckless. He really wants to conform and be looked up to, and he’s willing to earn his spurs by killing a dragon.

But when he actually manages to shoot one down, he realizes he can’t bring himself to kill it. Instead, he befriends it and fights valiantly to change his community’s perceptions about dragons. In the course of the movie, he (and everyone around him) discovers deep reserves of loyalty and bravery and commitment within himself. In the end, Hiccup metamorphoses from the geeky boy-next-door to an able Viking leader.

If your kids are anything like mine, I’d strongly recommend buying the DVD; it’s easier on the wallet!

Your turn! What do you and your kids love about “How to Train Your Dragon”? Are you excited about the second installment coming this month?

Watch the first 5 minutes of “How to Train Your Dragon 2,” and leave thoughts in the comments below!