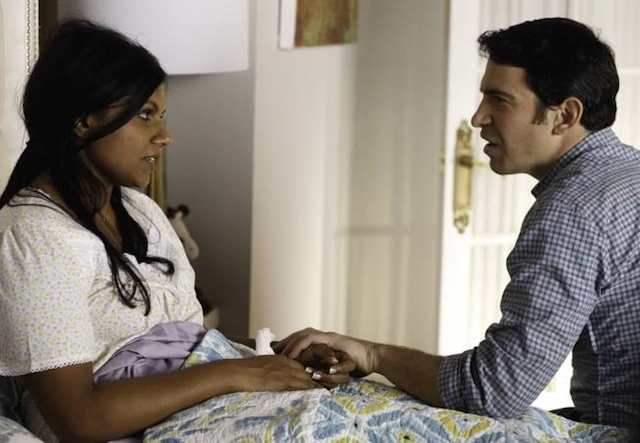 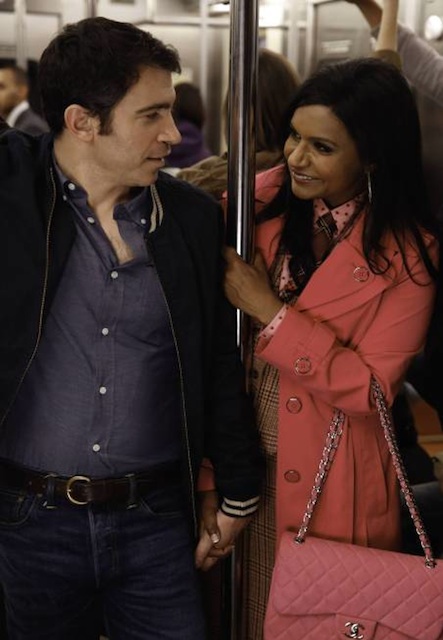 Well, Mindy fans, it’s here. The long awaited season finally of “The Mindy Project” has arrived, and for me at least, it does not disappoint. In fact, I’m pretty dang pleased.

Tonight’s season finale, “Danny and Mindy,” references several Meg Ryan romantic comedies, especially “You’ve Got Mail,” which Mindy Kaling must love because she references it frequently. (I love it too, so that’s perfectly fine with me, though I really should see “The Shop Around the Corner,” the film it’s based on, since I’ve already seen the musical: “She Loves Me.”) It also pays tribute to “When Harry Met Sally“ and “Sleepless in Seattle“—not to mention that bastion of romantic comedy excellence: “Dexter.”

(I don’t know about you all, but this show, this episode, is written specifically for me.)

Danny, Mindy, and Peter are riding the train to work when Mindy catches the eye of an attractive man reading J.D. Salinger. Peter and Danny see her “eye-banging” the young man (um, ew), and call her out on it.

A week later, Mindy reads a “Was It You” notice in the paper that clearly seems to be describing Mindy, the young man, and even Danny, riding the train. She starts an email conversation with the young man, named Andy (hmm…an inversion of Danny), who suggests that they meet.

Morgan, suspicious of this Andy character and wanting to protect Mindy, emails him while alone at the practice. When he sends his message, a notification sound rings on Danny’s computer, even though he’s not there. After sending another message, Morgan figures out that Danny is in fact the mysterious Andy.

Morgan and Tamra, who are still something of an item, confront Danny and find out what he’s up to. He’s trying to be “romantical,” as Morgan puts it, by finding a special way to tell Mindy that he regrets breaking up with her and is truly in love with her. Morgan and Tamra convince Danny that their faux meeting should be very special, so Danny, as Andy, suggests that he and Mindy meet on top of the Empire State Building (a la “Sleepless in Seattle”).

Of course, in Mindy-land, nothing ever quite goes as planned, and Mindy and Danny’s friendship wins out over romantic gestures—which should be something to learn from. Mindy again goes to Danny for help before her big date, when she gets gum in her hair (does she get herself in trouble intentionally?), but Danny, dressing up in a “20-piece suit” for the date, is trying to hide that fact so he won’t give anything away, even while Mindy insists on hanging out with him. While he’s in his bathroom secretly getting ready, she tells him through the door that he was right about them: they’re better off as friends. It was difficult, she says, but she realizes that they’re not right for each other.

It’s such a sweet, and sad, moment. Two of Mindy’s lines in this scene are both literal and figurative, and perfectly sum up the situation. When he doesn’t reply to her statement, she asks if he’s drowning. He says, “No, I’m here,” and she gets up to leave saying, “I left a huge mess.” Yes. Yes, she did.

Clearly, Danny can’t go to meet her now, and he leaves her waiting on top of the Empire State Building in the rain, where she catches a cold. He visits her while she’s sick, and their friendship wins out again. When Mindy learns that Danny is in fact “Andy,” after confronting the “real Andy” on the subway, Danny confesses, explaining that he was trying to be romantic. She says that’s the stupidest thing she’s ever heard—again breaking down typical rom-com clichés. They seem so wonderful and we would love to experience them, but when they happen in real life, they’re never what we want them to be.

In one of the best, most sensitive scenes to take place in a bathroom, Danny earnestly tells Mindy he loves her, but she turns him down. She doesn’t believe that he really loves her, at least not enough to take a chance. She thinks he’ll love her just until he decides he doesn’t any more, but she wants something real.

To prove that it is real, Danny tells her to meet him on top of the Empire State Building again, and that he’ll wait all night for her. She chooses not to go, until Peter and her other coworkers convince Mindy that Danny really does love her. In fact, Peter shows her Danny’s secret box of treasures, which includes the earrings she left at Danny’s apartment.

When she gets to the Empire State Building—in true “Mindy Project” take-a-rom-com-trope-and-turn-it-on-its-head fashion—the elevators aren’t working and Mindy has to take the stairs.

Feeling they did their duty, the gang from the practice pass by a pizza parlor and see Danny having a slice. When Mindy didn’t show after an hour, he gave up! How romantic is that? They send him back to the “Emperor State Building” (as Jeremy calls it) to find her, which he eventually does—after running in the street, to the tune of Dancing in the Dark (because Danny’s a huge Springsteen fan, and perhaps because of the famous Courteney Cox video), and being hit by a car! Just when he thinks he’s lost her, he hears her hyperventilating, lying in a heap after climbing over a hundred flights of stairs. He tells her he’s honestly in love with her and that he wants to go “all in” (in the gambling sense). Mindy finally gets her happy ending.

Of course, it’s not quite as romantic as she pictured (it never is): They both arrive at this ultimate romantic destination, not fully composed and looking gorgeous, but limping and staggering, her dying of exhaustion and him probably suffering from a broken rib. They make out on the floor of the observation deck, with garbage and cigarette butts framing her head. How sweet.

It’s kinda too bad, because it would’ve been really fun to see Danny fully dressed in that “20-piece suit.” But it also proves that you don’t have to be totally done up and perfect in order to have a romantic moment. Considering most of us are not perfect, that’s encouraging.

I’m pretty happy too. Of course I saw it coming. At this point I think Mindy and Danny are too good friends for it not to happen, and the show needs to make its viewers happy. But even better, the episode matches, even surpasses, its usually hysterical standards, while also being sweet and touching. I’m just sad that there won’t be any new episodes until the fall.

Here are some of my favorite lines from tonight’s season finale:

“Don’t click on that, you’ll get a virus.”—Danny, referring to the newspaper

Charlie: “Are you sure you don’t want to go to breakfast? I have an arrangement with this diner. They let me eat for free and I don’t bust them on their health code violations.”
Mindy: “Then why would you want to eat there?”
Charlie: “It’s good.”

“‘Why oh why must people throw things at me?’ Guys, I am always saying that.”—Mindy

“Because I’m smarter than you may have thoughten.”—Morgan

“You’re describing yourself as a prostitute again, you’ve gotta stop that.”—Charlie, to Mindy

“I’ll order whatever gave her an orgasm.”—Danny, paraphrasing “When Harry Met Sally”

“It takes a real man to march around Manhattan visiting every place Meg Ryan ever laugh-cried. And I got to see New York thru her eyes, and man, was it white.”—Danny, in voiceover (who’s he talking to exactly?)

“Danny, who did I mail my underwear to?”—Mindy, upon learning that “Andy” is fake

“Great, a picture of Danny and his brother, a picture of some old hot guy [New York Mayor Rudy Giuliani], Mardi Gras beads [a rosary], and some trashy skank’s earrings.”—Mindy, describing the contents of the box in Danny’s desk

So what did you think, Mindy fans? Are you pleased with the season finale? Was it everything you hoped for? Did you expect anything other than a reunion for the two romantic gynecologists? What do you plan to replace “The Mindy Project” with for the summer? Leave your comments below. And thanks so much for reading along with me this season!