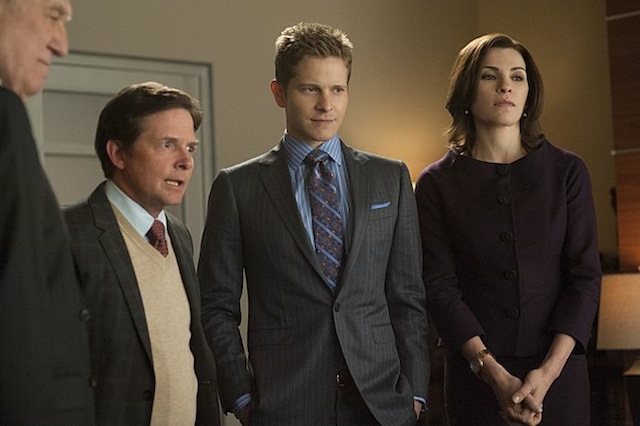 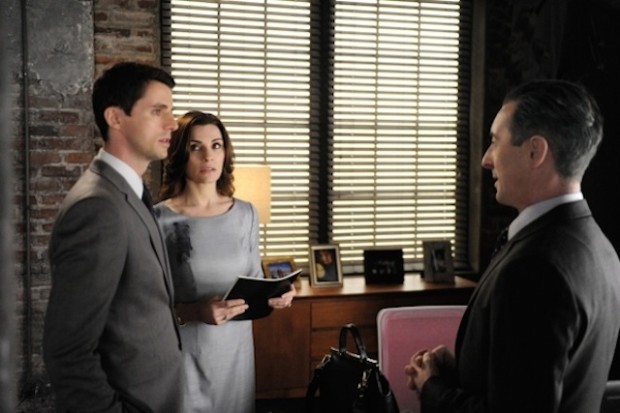 Well, good-wifers, the stellar fifth season of  “The Good Wife” nears its finale with another fast-paced, if slightly frustrating episode. After all the Sturm und Drang of the last several episodes, we’re reminded of where life was before Will’s death, bringing back some familiar faces from earlier in the season, as well as some familiar themes. Recalling the early days of the Florrick-Agos split, the start-up goes up against Lockhart-Gardner again, this time with Alicia and Cary opposing Louis Canning instead of Will. Alicia and Cary represent the Paisley Group, headed by James Paisley (Tom Skerritt), in front of whom Will embarrassed himself during the earlier client wars. That was back before Cary and Kalinda started sleeping together again.

Yeah, that. I had happily forgotten about Cary and Kalinda’s relationship, but they’re back again. I guess perhaps I want Kalinda to make a decision, but I also feel their relationship came out of nowhere. They continue to be on opposing sides professionally, and they seem—or at least Kalinda seems—incapable of keeping their professional and personal lives separate. I don’t blame her for that, per se, but it would be easier to not betray her lover’s secrets if she weren’t constantly in a situation to learn about them.

In this case, it’s not such a problem. In fact, it helps Diane find some clarity when she learns that Canning, now presumably her partner (or her “scumbag,” as Canning himself put it), has been betraying her. But I’m getting ahead of myself a bit.

Canning represents the former CFO of the Paisley Group, who filed a wrongful termination suit claiming that he was fired because of his sexual orientation. While Alicia believes Canning’s case against them is weak, she still convinces Paisley to settle so that it won’t affect the company’s upcoming merger. They already have enough obstacles with protesters throwing pies at them. The problem is, Paisley seems incapable of not putting his foot in his mouth during on-air interviews, offending many minority groups with his pro-One Percent comments. Equating the One Percent with Jews in Nazi Germany? That’s disgustingly low.

The case becomes all about jury selection, with the two sides taking turns trying to stack the deck in their favor. As Paisley’s televised jabs continue to shrink their pool of possible jurors, Alicia talks him into hiring a PR firm to fix their outward appearance. They also get lucky when Canning is caught in an uncompromising position on television, as he’s representing Kael Pepper, a pharmaceutical company accused of, among other things, price-gouging medications for AIDS patients. The two firms agree to settle the case for a relatively mere $1 million.

Diane isn’t aware of Canning’s working with Kael Pepper when she talks with Rayna Hecht (remember her?) about co-counseling an Erin Brockovich-type case against the pharmaceutical company. I’d ask how any company can survive if the partners aren’t talking to each other about the clients they’re bringing on, but that’s the point: Louis is trying to keep Diane in the dark because he wants to squeeze her out.

Rayna is testing the waters again, this time as she searches for co-counsel. Apparently she finds life with Elsbeth Tascioni “too constricting,” which seems unusual given the wacky, unorthodox style of our favorite madcap attorney (who, alas, isn’t actually in this episode).

Diane approaches David Lee, who is well aware how important Rayna is to LG, or any law firm in the city, and agrees to help Diane if she can get Rayna on board. Kalinda learns from Cary (while they’re being intimate) that FA is also meeting with Rayna, so when Rayna turns down Diane because of lies about Diane’s inability to run LG after Will’s passing, Diane accuses Cary and Alicia of spreading those lies. They deny it, of course, explaining to her that Rayna left their meeting early, and Diane realizes that Canning is the one who’s been spreading those rumors. So much for him being her scumbag.

I find the Rayna Hecht storyline frustrating. We still don’t know much about this character, so it’s unclear how she has so much power to make these other lawyers jump through hoops for her. But I start to wonder if there’s a chance of LG and FA rejoining. Or at least of Diane working with FA again. Since the Gardner half of the practice is no longer there (sniff), what is really keeping the Lockhart half from leaving? It’s only her practice…

I’m still bothered by that, too: Canning became a partner so quickly, and equally quickly gained more votes than Diane. How is he so powerful that she seems to have no allies except Kalinda?

Meanwhile, Alicia and Eli team up to help Finn with his campaign for State’s Attorney and their upcoming official announcement with Peter. Since Peter endorsed Finn and not Castro, they expect Castro to retaliate with some dirt against Finn. Eli tells Finn to bring any accusations that Castro presents him with to Eli’s attention.

Suddenly, to Eli and Alicia, Peter delays the announcement for no apparent reason. What they don’t know is that he’s jealous—and frankly, acting childish—because Castro gets under his skin. Castro shows Peter a picture of Finn leaving Alicia’s apartment, stating that everyone will assume they are lovers.

Peter retaliates, not only by delaying the announcement, but by openly and obviously flirting with an intern in his office. Not smart, Peter. Yes, he no longer needs to be faithful to Alicia since their new arrangement, but that is not the way to date other people while still keeping up appearances.

That is the whole point of this episode in particular, if not the show in general: it always comes down to outward appearances. As Eli says in this episode, “it’s not about the facts, it’s about what the facts can be made to look like.” Everyone grapples with this, from Alicia, Peter, and Diane, right down to Canning, Paisley, and Rayna Hecht. Rayna, at least, benefits from having the best-looking outward appearance, since everyone seems to bend over backward for a chance to work with her.

Peter’s obvious dalliance with the intern forces Eli to find out the truth about Peter and Alicia’s relationship, but since Peter won’t tell him, he has to confront Alicia. It’s almost like Alicia and Eli are becoming friends. She tells him that the marriage is essentially over, but Eli insists that Peter loves her, whether or not she reciprocates.

Eli also asks Alicia if she’s been sleeping with Finn, and the two realize that the shoe they expected Castro to drop had already fallen, into Peter’s lap, not Finn’s. She of course explains the perfectly rational, understandable reason why Finn would be at her apartment, which Peter understands too. It’s too late though, as Peter literally (via his laptop wallpaper) closes the lid on his relationship with Alicia, and his redhead intern ignores the warning Eli gave her and flirts with Peter anyway.

So what do you think, good-wifers? Will Peter be a complete idiot and start up a relationship with the intern (uh, paging Bill Clinton)? Will Canning succeed in pushing Diane out, or toward Florrick-Agos, or will Diane fight for what’s hers? Will more people learn about Alicia and Peter’s current standings—like perhaps their mothers, who share some wine in next week’s season finale? Chime in below.