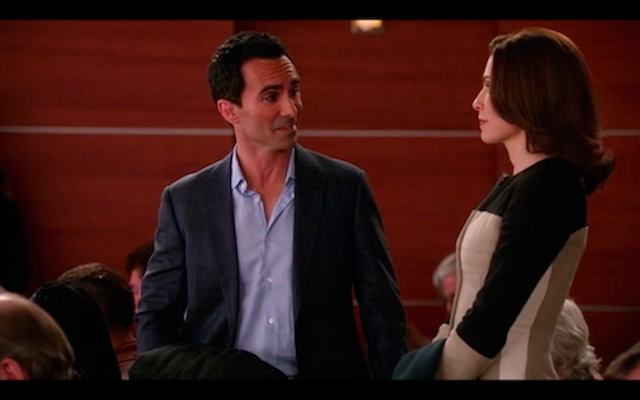 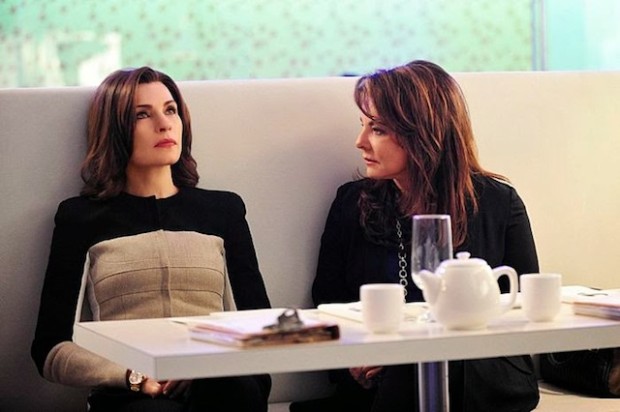 Whoa, good-wifers! How about another shocking episode of “The Good Wife.” This time, Alicia actually takes a day off! How’s that possible?

Yes, I’m obviously being sarcastic, but I didn’t think she’d actually do it. But Cary insists, doing everything he can to force Alicia to take the day off—to the point where I’m starting not to trust him. (Cary’s role on the show seems to be diminishing, and he needs a better story line soon.) He insists because Alicia hasn’t had a free day in, perhaps forever. I thought she took some sick days while trying to get over Will, but that’s not quite the same as a day off.

Problem is, Alicia doesn’t know what to do with herself—and not just with her day off. Still struggling with her feelings after Will’s death, she’s suddenly suffering an identity crisis, unsure whether she wants to be a lawyer anymore. It’s not quite clear where this crisis came from, since she works constantly (as we’ve established) and seems to love it.

After trying and failing, hysterically, to figure out her million remotes and get her TV working (though it eventually works later when that idiotic cop show she’s been watching is on again), Alicia even agrees to have lunch with her mother (Stockard Channing), but her mother’s special friend interrupts them. Mom shows up later at her apartment and comforts her about Will. She suggests that Alicia talk to Will, ask him questions about what she’s feeling, and even though he may not answer, there will be answers in the little things. As many issues as Alicia has with her mother, she obviously cares deeply for her, and is able to help her here.

Alicia also meets a new friend while trying to get out of jury duty. Nestor Carbonell (“Lost,” “Ringer”) is Daniel Irwin, a handsome fellow jury duty victim who she clearly finds attractive. He’s embarrassed when he learns who she is, but he also recognizes the attraction between them.

Perhaps following a little of Owen’s advice, Alicia returns to the courthouse later, hoping to bump into Daniel again. They share a midday meal together, but she cannot allow herself to really enjoy his company. She feels people are watching her and judging her, but she’s mostly judging herself. He tells her he’ll be there again at 7, and hopes she’ll join him for a drink. Alicia wrestles with whether or not to go, even making it to outside the restaurant, where he sits inside, unaware, with two glasses of wine. But she doesn’t go inside. She feels guilty, and doesn’t feel right about meeting another man. But who is she cheating on, Peter? Or Will?

Over at Lockhart-Gardner, Diane helps out her friend and client, Lyle Pollard (Robert Klein), whose grandson Robbie is getting the third degree from Finn Polmar (who’s looking a bit like Superman). Finn’s attacking him hard, trying to find out his involvement in a messed up website called Silk Road, a black market site for drugs, weapons, even contract killings. Robbie claims he only writes fake reviews for the site, but as Diane and Kalinda look into the case further, everything comes back to Robbie. An employee who Finn says is a witness says Robbie invented the site. They trace down a person they think owns the site, but then find his dead body at his apartment.

Eventually, Kalinda finds potential evidence that implicates Robbie both in owning the site and in framing the employee for the murder. Robbie’s apparently playing the sad-sac nerd caught in a bad situation, when he’s really the mastermind behind it. Concerned that her client may be forced to perjure himself, Diane immediately drops the case.

She’s got other problems anyway. David Lee and Louis Canning seem to be pushing her out. David of course makes ridiculous claims that Diane isn’t taking enough care of her clients and he is just doing what needs to be done to make them happy. He tries to prove how incapable she is since Will died, while most everyone can see that Diane’s stronger. She tells Kalinda she’s channeling Will’s ghost.

Canning and Lee eventually “come clean” and tell Diane they’ve been working on Canning’s estate, because he’s dying (what exactly this has to do with Diane’s clients, I’m not sure). When Kalinda investigates, she discovers that both scenarios are true: Louis Canning is dying, but he and Lee are still trying to screw Diane over. Take them down, Diane.

Poor Finn also has more to deal with than the Silk Road case. His campaign for State’s Attorney’s office is not doing so well, and it’s making Eli nervous, especially since Peter endorsed him last week. Eli gets him a television interview with journalist Mandy Post (Miriam Shor), and even coaches him on the interview to help him say the exact necessary things. Finn paints a humble, strong portrait of a man who’s struggled through adversity and survived, using his humility to show what a hero he is. It’s difficult to hear the story of Will’s death again so matter-of-factly. Just like Alicia, I’m still so very sad, and angry, that Will is gone.

So what do you think, good-wifers? With only two episodes left in the season, will Alicia ever take a chance on love again? Is there more to her relationship with Finn to come? Will Diane get squeezed out of LG or will she take the old boys club down? Will we see Cary do more again, or is he strictly a sidekick to Alicia? Are you still sad about Will’s death, or is it time for me to get over it? State your predictions in the comments.