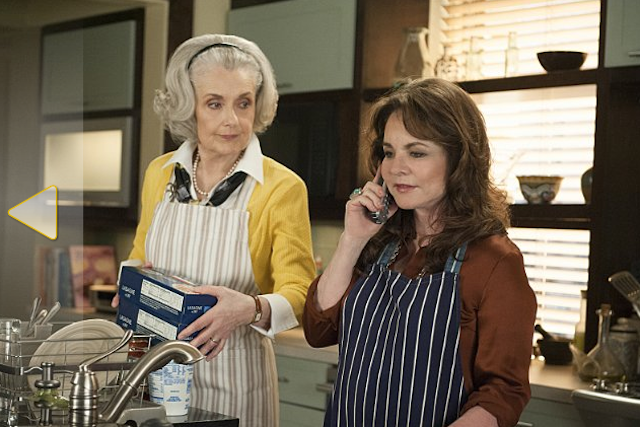 It’s here! The Season Finally of “The Good Wife” has arrived, and considering this unprecedented and totally thrilling season thus far, you know the finale is equally as crazy.

So Alicia’s being pulled in twenty different directions again. In other words, it’s business as usual. As she finally admits to Finn, it’s never a good time around here. Except for us viewers.

This time, Alicia is dealing with issues at Florrick-Agos while trying to prepare for a family celebration at her home that evening. Zach is graduating from high school (I didn’t realize high schools had Friday night ceremonies, but whatever), and is leaving the next day for a summer job. Both mothers-in-law are attending the celebration, as well as Eli (I didn’t realize he was that much a part of the family). Everyone keeps asking Alicia if she’s ok, again, but this time about empty next syndrome.

On the legal front, Florrick-Agos and Lockhart-Gardner meet in a three-way videoconference, because they’re both being sued by a former client, a mother in an adoption case. (So great to see Christian Borle again, even though he’s vastly underused.) She hired LG back before the split, and Alicia served as the primary lawyer on the case, so she’s attacking both firms for $6 million.

But all of this is just a ruse, as far as the important plot of this episode. After the videoconference, the other Carey at FA realizes that LG left the camera on in their conference room, and he can hear every confidential word they’re saying. When Clark Hayden realizes what Carey’s doing, he insists that they turn off the camera and alert LG about their error, but Carey refuses. As the other partners get involved (including Robyn—where’s she been these many weeks?), they listen more and learn quite a bit about what’s happening at LG.

On camera, Louis Canning and David Lee try to get Howard Lyman on their side so they can vote to push Diane out as managing partner. Eventually they talk, vaguely, about the adoption suit—and say that they’re going to destroy FA in 48 hours.

This certainly has the partners at FA in a tizzy. They decide that Alicia should go to LG for the deposition so that she can indirectly lead them to talk on camera about how they plan to destroy the firm. FA learn that LG plans to take Chumhum from them, which would remove 75 percent of their income.

As the team at FA employs the camera to gain information they can use to defend themselves against LG, they start to fall victim to their own infighting. It’s almost as if this live stream is the Yoko Ono to FA, pulling apart their loyal team and pitting Alicia against Cary as they consider merging with LG, an idea Diane and Alicia discussed after Will’s funeral. (I start to wonder if Canning and Lee planned this, intentionally leaving the camera on and planting ideas in FA’s heads so that they’d destroy themselves, but it doesn’t seem likely.)

Cary is against merging, as he’d be relegated back to an unnamed partner, and Alicia is for it, as I guess she has less to lose, and a secret unofficial poll puts Alicia ahead in a vote. To make sure the merger doesn’t happen, Cary sneakily tells Canning about the proposed arrangement.

While spying on LG via camera, Cary also learns that Diane and Kalinda have been exploiting the latter’s intimate relationship with him. Shocker! (It’s hard to tell in print, but that’s sarcasm.) I feel sad for Cary, because he’s clearly hurt by this revelation, but HOW DID HE NOT AT LEAST SUSPECT such a thing? Anyone who knows anything about Kalinda knows she’s certainly capable, and probably likely. In fact, isn’t that why they had a falling out when the two firms split?

Of course, Eli also bugs Alicia for attention when a dark circumstance in Finn Polmar’s past surfaces, making Eli feel that the only solution is for Finn to drop out of the State’s Attorney race. Apparently, Finn bribed a prosecutor to drop drug charges against his sister, and even if they tried to play up the sympathy angle, Eli feels that the public would only remember the bribery.

Eli and Peter discuss other possibilities for State’s Attorney, and think of Diane—despite their rocky past when they yanked the Supreme Court Justice position from her grasp. She only half-heartedly considers it, based on Canning and Lee’s conniving against her, but why would she want to give up her hard-earned practice for a step down?

Louis Canning gives her the answer to that question: he shows her a notice of dissolution. Because Will, during his reckless phase, had acquired LG offices in New York and Los Angeles without the full support of the managing partners, Canning would be able to dissolve the practice, and insists that he will if he doesn’t make managing partner—despite the fact that he’s dying. As I mentioned last week, I still don’t understand exactly why he wants this, how he gained so much power so quickly, or what happened to his old firm. I also thought he had a wife and family. Don’t they matter at all, especially with his failing health?

Feeling a bit stuck, Diane comes up with a new plan—which by the way, I totally called last week: she goes to FA with a proposal, not to merge, but for her to join them.

Back at Alicia’s apartment, somehow her mother, Veronica, and Peter’s mom, Jackie, didn’t kill each other, or burn down the building, despite Veronica telling Jackie about their children’s special arrangement, and despite Alicia’s not being there; she only barely makes it to graduation in time to watch Zach receive his diploma. Zach reveals that he’s leaving for his summer job that night, instead of the next morning—just like Alicia had done to her mother. This affects Alicia, I suspect, more than she thought it would (especially if the piano version of Puccini’s O Mio Babbino Caro playing underneath is any indication).

As Alicia and Eli sit at an empty dinner table (with mostly full plates of food; was it really that awful?), Eli stares at her intently, the cogs in his brain spinning wildly. He realizes that the perfect candidate for State’s Attorney is sitting right in front of him.

Eli’s staring at Alicia mimics the opening scene of the episode, as both Eli and the folks in the live-stream conference call look directly into the camera. They speak to us, the viewers, watching us as intently as we’ve been watching them.

Well good-wifers, that’s it for this splendid season. Thanks so much for sharing it with me, and please check back for an interview with composer David Buckley, whose truly stunning score is under consideration for an Emmy nomination. I hope he gets it, as the score has added so much to the show.

So what did you think of the season finale? Was it everything you hoped? What do you think will happen next season? Will Alicia consider the State’s Attorney position? Will FA accept Diane into their fold? Will Cary ever trust Kalinda again? And what will you watch over the summer to replace the void until season 6?  Chime in below.