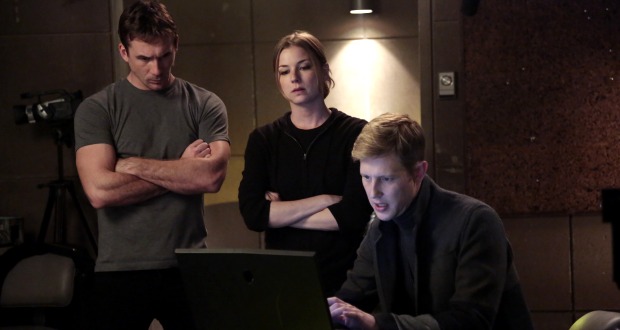 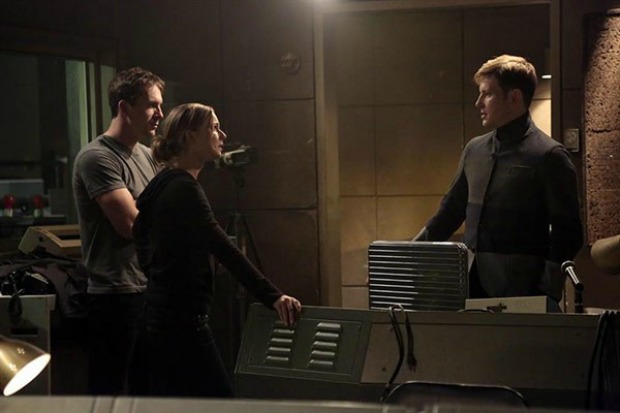 We are so close to the season finale. I really can’t wait. “Revenge” is truly a night time soap opera, reminding me of shows like “Dynasty,” “Knots Landing,” and of course, “Dallas” (of which there is a modern day version on TNT) – and I love it!

This week, Emily went to new lengths to bring the Graysons down – she had her own sister (Charlotte) kidnapped! I sort of had a hunch that was the case. At least we knew Emily wouldn’t hurt her.

After kidnapping Charlotte, Emily, Aiden and Nolan (unwillingly) devise a plan to get Conrad to confess to the whole thing or Charlotte would be killed (at least that’s what Conrad would think). Nolan was even able to manipulate MyClone and make it look like Charlotte was being beaten (but not really) – and Conrad was upset. Then Emily sent a fake ear (to Conrad’s horror), showing him that they meant business. While being held captive, multiple televisions played clips and statements regarding flight 197 – and David Clarke’s innocence – which Charlotte was forced to watch.

Jack notices Charlotte is missing, and of course knows who to go to – Emily. Once he see’s what’s happening, he becomes very angry. I was sort of angry myself. I wasn’t sure if he was going to finally put a stop to it all or what. He does think Emily goes to extremes – oh really?!

Victoria, still grieving over Pascal’s death, vows to Daniel that she will get her own revenge. She says that Conrad will pay, as well as Emily Thorne.

She hires a private Investigator to get some DNA samples tested. The results? Charlotte and Carl are not related.

Margaux thinks her father was murdered and hires a detective to look into it. The detective tells her that Pascal was wearing a wire. Margaux says that he was known to record conversations with people that he didn’t trust. I guess he should have worn a wire 24/7!

Later, Daniel speaks with Margaux in her office. They both admit that they think Pascal was murdered, and Daniel says he thinks it was his father. Margaux shows him footage from the night Pascal died. A woman runs down the stairway immediately after the accident. Margaux doesn’t realize it’s Emily, but Daniel does. I knew that was going to be a problem!

Back to Charlotte … Aiden started to worry about her because she was having a panic attack (Aiden saw his sister go through this during her kidnapping). Emily goes to pick up a sedative for her, but is approached by a detective who takes her to the precinct for questioning about Pascal’s death – Daniel tipped him about the tape. As she waits, she dials Nolan so he can hear the conversation (she’s so clever), and he alerts Aiden to go to her rescue, but then Jack has to stay and help with Charlotte, much to his dislike.

At the Manor, Conrad gets ready for the press conference in which he and Victoria will confess their wrong-doings about setting up David Clarke, but Victoria surprises him and says she won’t be there. He wasn’t happy about that, was he? I wouldn’t want to cross him; you end up dead. Of course, all of the nastiness came out at one another. Boy, are they bad!

Jack can’t stand that Charlotte is so upset and crying. He decides to let her go – I wasn’t sure what was going to happen – I just didn’t want her to see him … and she didn’t. After she cut herself loose with the knife he left in her hand, she went home and confronted Conrad. Whoa! Conrad turned into a raving lunatic (which he is), calling her a ungrateful bastard, telling her he was going to confess everything to save her and that he could have her killed anytime he wanted. Well, it was quite a surprise when a light went on that was attached to Charlotte’s  jacket – recording every horrible thing he said – and his confession! Gotcha! Although it seemed like Charlotte didn’t know she was wired either. Loved it!

Back at the station, Aiden comes flying in and tackles Daniel to distract the police from questioning Emily. The cops take Aiden away and Daniel goes to see Margaux. She wants to know what is going on, and Daniel tells her that Pascal was in on the whole convoluted plan. Of course she was very upset, and Daniel was there to comfort her – another hook-up is coming, right?

At Grayson Manor, Victoria plays the piano while she and Conrad wait for the police. Conrad thinks Victoria was behind it all, but of course, we know it was Em. I loved it when they took him away (smug until the end) – Victoria says to him, “Goodbye Conrad. Do rot in hell.” Funny, although you know that somehow he’ll get out. He’s like J.R. Ewing!

Aiden visits Emily at her beach house, and it seems the romance was re-kindled. He told her to celebrate, but she said it wasn’t over. Victoria is still on the loose, and she plans on getting her too. Jack interrupts Aiden and Emily’s embrace, and shows her the ring that was left at The Stowaway – the one that had DC (David Clarke’s initials) engraved on it. She is bothered and needs answers. I’ve been trying to figure out that ring, but can’t. Any ideas?

On Victoria’s bedroom perch, Daniel is angered to find out Victoria wasn’t going to pay the ransom for Charlotte. But … she knows that Emily is really Amanda Clarke (because of the DNA test), and Amanda would never have hurt her sister.

Lastly, Emily visits Conrad in jail. She tells him she did it in memory of David and Amanda Clarke. His face, wow! Then I loved when she told him she still needed to get Victoria … and he said, “godspeed.” Ha ha. I laughed.

What do you want to see happen in the “Revenge” finale? Someone is going to die! Who do you think it will be?