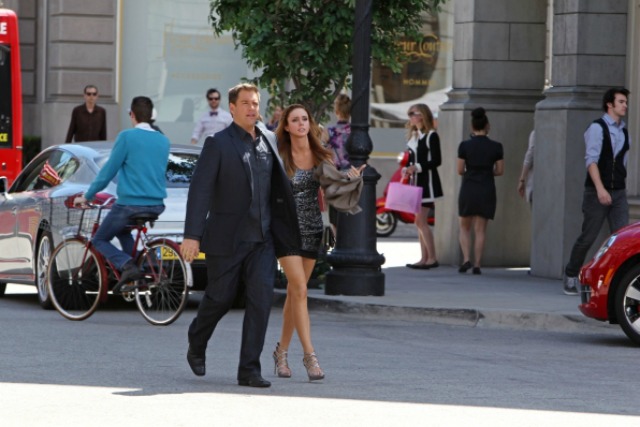 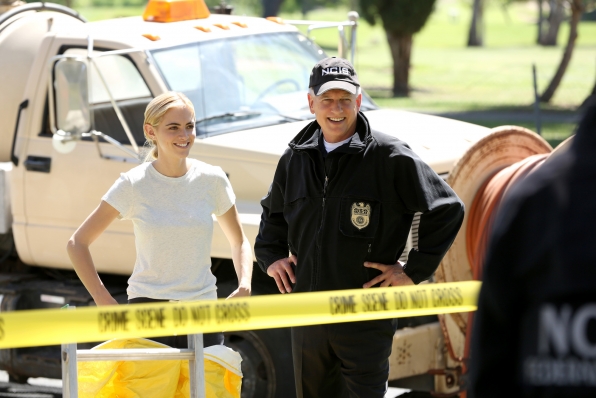 Surprise at the opening of this week’s episode of “NCIS.” Tony, our very special agent Anthony Dinozzo, is wanted for murder in France. How did that happen?!

We soon flash back to “thirty-six hours earlier.” Tony is being sent to the “NCIS” office in Marseille, France, to provide a seminar on internet security … Yeah, right.

That’s what Tony thought, too, immediately understanding that this is a cover. After asking Vance what the real reason for his trip to France is, we learn that Admiral Kendall is worried about his daughter, Amanda, who resides in Marseille. She hasn’t been on her best behavior for some years, and now the Admiral says it’s gone too far and she needs to be protected. There’s a picture in a newspaper that shows Amanda partying with the daughter of a Russian arms dealer and the son of an Iranian cabinet member. Tony’s assignment is simply to pick Amanda up in Marseille and bring her home to D.C. The agents in France will bring her to the office there.

By the way, I thought it was completely hilarious how bothered McGee was about Tony getting this seminar assignment. It was subtle, but it was there. 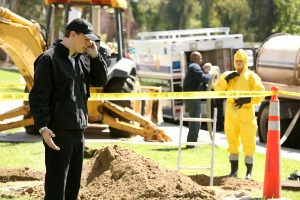 While Tony’s off to France, a body is discovered in D.C. Poor McGee and Bishop need to get this one out of a septic tank. Yikes.

When Tony arrives at the office in Marseille, he finds the security camera wires cut, the front door forced, and, inside, all agents dead. The French police arrive and show Tony pictures that prove that Amanda was brought in to the office. However she’s no longer there and a witness has told the police that she sneaked out a window at the back of the building. She is the first suspect. They can’t rule out Tony as a suspect either, and the police take Tony’s gun to investigate. Tony says he doesn’t who Amanda is.

When Tony finds Amanda at a night club, he confronts her and after telling her the agents have been killed, she agrees to come with him. She is not the killer. Once they step outside, the French inspectors show up. Inspector Cheblis says she felt Tony was not being truthful with her when he claimed not to know Amanda. She tries to get Tony and Amanda to the police station, but when Tony resists, she suddenly pulls his gun and shoots her own coworker. Right after the shot, a lot of people start coming out of the nightclub and Tony and Amanda takes this chance to run.

He makes them walk all night so as to not be tracked but when they stop to get something to eat, they see on a TV screen that Tony is wanted for murder, he’s being framed for the murder of the French inspector. They need to get out of France but hiring a car or using public transportation is not an option since anyone might recognize Tony and call the cops. Amanda comes up with a solution of some sorts. A party bus, owned by one of her rich, partying friends. They are headed to the “NCIS” office in Rota, Spain and Tony cleverly gets this message to D.C. through an online picture game, which he knows Palmer plays addressing him, through pictures, as “autopsy gremlin.” That was pretty hilarious. And I thought it really was very clever.

Meanwhile, they discover that the body in D.C. is Zach Martin. Ducky says he was tortured and is surprised when Gibbs tells him Zach owned an employment office. Not exactly the type of person you expect to be tortured, killed, and thrown in  a septic tank. They then find out they Zach did not own a regular employment office. It’s fake. He’s never had one client and never used his office. It must be some kind of cover. Abby discovers that Zach’s real name is Zakaria Hassan. And, as it turns out, Zakaria and Amanda went to Georgetown together.

By this time, I was really wondering where this was going to go. I mean, it’s the penultimate episode of the season. It must be leading up to something big, right? Something that will continue into next week. And really, most of it is still just very vague. Although the stuff with the French inspector who can’t be trusted and Tony being framed is sort of exciting.

Anyway, while Tony and Amanda are on their way to Rota, Tony receives an answer from Palmer. Agents will be waiting for them at the border with Spain. We do not learn what the second message he receives says. The bus catches fire and they need to stop in the middle of nowhere. Of course, somebody called the French 911 and firefighters and police are on their way, which means that Tony and Amanda need to get away from the scene.  They end up going to a small town up ahead, a quiet diner where there’s no TV.

Back in D.C. Bishop has discovered that Zakaria Hassan was probably working as a spy. They found a lot of encrypted messages on his laptop and have been able to decrypt one so far. There is a lot of information on national security, and the message apparently came from a D.O.D. server … and Admiral Kendall’s login.

Tony catches Amanda trying to run away from him. He confronts her. He says he thinks she started the fire. Then he tells her the second message was about Zakaria Hassan. She went to college with him and now he’s dead. “Everywhere you go, people die.” He also doesn’t understand that while he’s been framed for murder and they’ve been running for their lives, all she seems to care about it finding her friend Amir, the son of the Iranian cabinet minister. “I think you are some kind of spy.” Amanda admits she is, but she is not working for the Iranian government, as Tony suspected. Amir works for Amanda and “I work for the same people you do.”

Well … it is suddenly all very interesting and exciting!

It turns out that Amanda has been a member of the Defense Clandestine Service since she was in college, recruited by Zakaria. She, in turn, recruited Amir, who is not a fan of his nation’s politics. He’s been feeding her mostly low grade intel but came across something bigger a few weeks ago. Though he was afraid of being caught, he copied the files for Amanda anyway. She sent them to Zakaria and has not been able to reach Amir since. Tony suspects the Iranians probably found out and tracked the files to Zakaria. They must now be on to Amanda as well. Amanda is set on getting Amir out of Marseille, as she feels responsible.

Tony calls Gibbs from the diner to get help with finding Amir. But after they hang up it seems that Tony somehow let his team know beforehand to trace the call and see if anyone else was tracing it too. Abby and McGee do their magic and find out that the call was being traced. And by none other than Inspector Cheblis.

Abby and McGee track Cheblis and let Tony know. They follow her to a building and expect Amir to be inside, but Cheblis leaves the building by herself. Instead of following her again, Tony decides they should go into the building. They find Amir and another friend, Layla. They’ve been held there since yesterday and Amir’s been tortured.

Now, here’s the only thing really bothering me about this episode. Tony, as a federal agent, should have noticed it was strange that Layla was there, not hurt, not bound. She could have escaped, she could have gotten Amir out of there. It’s very odd to think that Tony would not suspect her.

And, of course, Cheblis shows up again, but is overpowered by Amanda and Tony. Dear Layla is her boss, hired by the Iranians after they found out what Amir was doing. Gibbs has taken care that a unit was sent to the building to catch the bad guys, or girls, in this case. Tony does end up having to shoot Layla.

The ending. Breena sending Jimmy the pictures of a bun and an oven and Jimmy, being Jimmy, not understanding what she is saying. That made me laugh so hard. And squee. I was so disappointed they didn’t go through with the storyline of them adopting. I still am. But now I’m also glad they’re having their own baby.

And all is well.

But what about that season finale next week? I’m confused. I’m so used to the season ending with an arc.