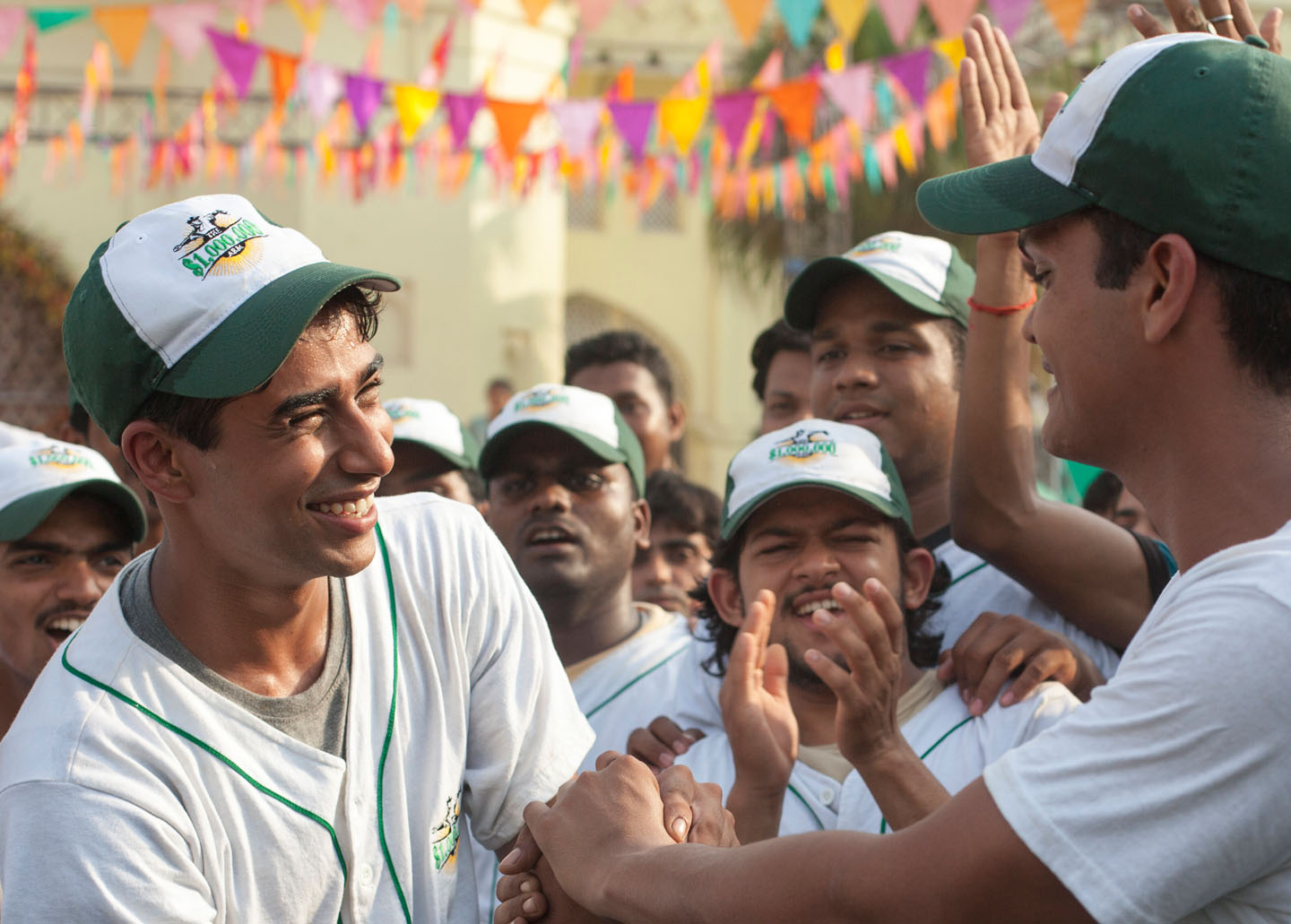 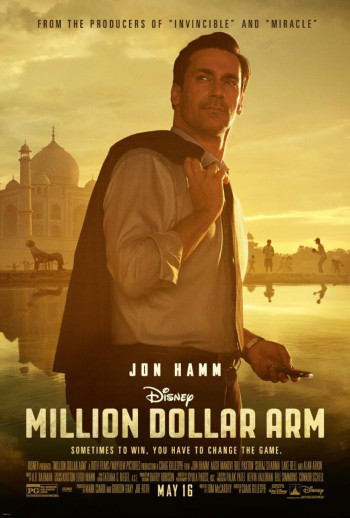 REVIEW: It’s so rare that a PG-rated movie comes along that’s actually funny and inspirational and all those good things, so I always get excited when that happens. I raved about “Mom’s Night Out” a few weeks ago, and now I’m raving about “Million Dollar Arm.” Most sports movies include some element of inspiration, and “Million Dollar Arm” follows that trend. It’s based on a true story (buy the book by J.B. Bernstein), and features a really sweet story that’s not only about sports, but also about family — both biological families and families that evolve out of a certain situation.

The story follows sports agent J.B. Bernstein (Jon Hamm) and his business partner, Aash (Aasif Mandvi), who face a financial crisis when their one big A-List client decides to go with another agency. Despondent about their future, Aash, who is of Indian descent, says he’s going to go home and relax by watching his native sport, cricket.

J.B. thinks it’s a ridiculous sport, but then finds himself channel surfing back and forth between a cricket game and Susan Boyle’s performance of “I Dreamed a Dream” on “Britain’s Got Talent.” You can practically see the lightbulb start glowing over J.B.’s head, as he gets the idea to recruit cricket players for Major League Baseball. After all, if someone like Susan Boyle can make her dreams come true with a TV talent show, maybe J.B. can strike the same kind of gold, only with baseball!

So he comes up with “Million Dollar Arm,” a competition whereby he and a talent scout go to India, create a big buzz about the competition, and offer a cash prize to the winner — who also gets to come to the U.S. and try out for Major League Baseball. It’s an impossible goal and just the sort of story that makes for inspiring movie-watching.

After playing Don Draper on “Mad Men” for 6 1/2 seasons, Jon Hamm is a good choice to play the slick agent who dreams big and goes for broke. He’s charming and likeable (and scruffier than Don Draper), especially towards the end of the movie where he starts to realize that money isn’t everything, and perhaps his cute tenant next door, Brenda (Lake Bell), is a better romantic choice than the supermodel blondes with whom he’s been cavorting.

I especially love the two Indians who win the “Million Dollar Arm” competition — Rinku (Suraj Sharma, “Life of Pi”) and Dinesh (Madhur Mittal, “Slumdog Millionaire”). Their performances are both poignant (they have a very close family in India) and funny, as they come to the U.S. and attempt to navigate this strange new world with magic elevator doors, stairs that “move,” big screen TVs, and this new food called “pizza” that’s actually delivered to your door. Not only that, they’re staying in a house (Bernstein’s) that’s as big as their village back in India.

Other standout performances include the veteran (and sleepy) baseball scout Ray, played by the always amusing Alan Arkin, Bill Paxton as pitching guru Tom House, Darshan Jariwala as Vivek, the pint-sized Indian baseball fan who hopes to coach baseball full-time and comes to the U.S. to serve as their interpreter, and Tzi Ma as venture capitalist “Chang.” I guess if anyone’s the bad guy here, it’s him, but he has to protect his investments.

“Million Dollar Arm” is a feel-good movie that’s also a cute family movie. You could also call this a faith-based movie, in that the Indian boys integrate prayer into their daily lives — and even get J.B. to pray along with them. It also reminds us that sports shouldn’t be all about the money (which it IS more and more in our culture). It should also be about fun. That’s relevant whether you’re making millions as a pro baseball player or participating in middle school soccer.

I also love the catchy Indian-ish soundtrack by A.R. Rahman, who scored “Slumdog Millionaire” and helmed the score and award-winning tune “If I Rise” from “127 Hours.”

Stay through the end credits to see the real people upon which this movie is based (love that!).

Sex/Nudity: At first, J.B. is known as a ladies’ man who only dates models, and one scene shows a pretty girl kissing him goodbye after spending the night at his house. In another scene, one of the Indian players walks in on a girl in the bathroom, and both of them freak out. J.B. and Brenda kiss passionately and head to her bedroom; the next morning, he’s shown leaving her place in the same clothes he had on the night before. The guys ask J.B. if he kissed her (she kissed HIM, he says) and whether they’ll get married, and J.B. explains that just because he spent the night with her doesn’t mean they’re “together.” A woman is referred to as a “hottie,” and women wear revealing outfits during a party at an NFL player’s house.

Violence/Gore: J.B. gets upset with Dinesh and Rinku and yells at them. He also yells at Brenda after she lets the guys cook and one of them accidentally cuts his hand with a knife.

Drugs/Alcohol: The three Indian characters aren’t used to alcohol and get drunk at a party, then throw up all over J.B.’s fancy car. J.B. drinks beer and also shares a Scotch with Brenda.

Will Parents Like It? “Million Dollar Arm” is a sweet family movie which shows that “families” aren’t always biologically related. It also features positive messages about working hard, staying focused, thinking outside the box, and never giving up. Young viewers will learn about Indian culture, as much of the movie was filmed in colorful (and sometimes gritty) India.