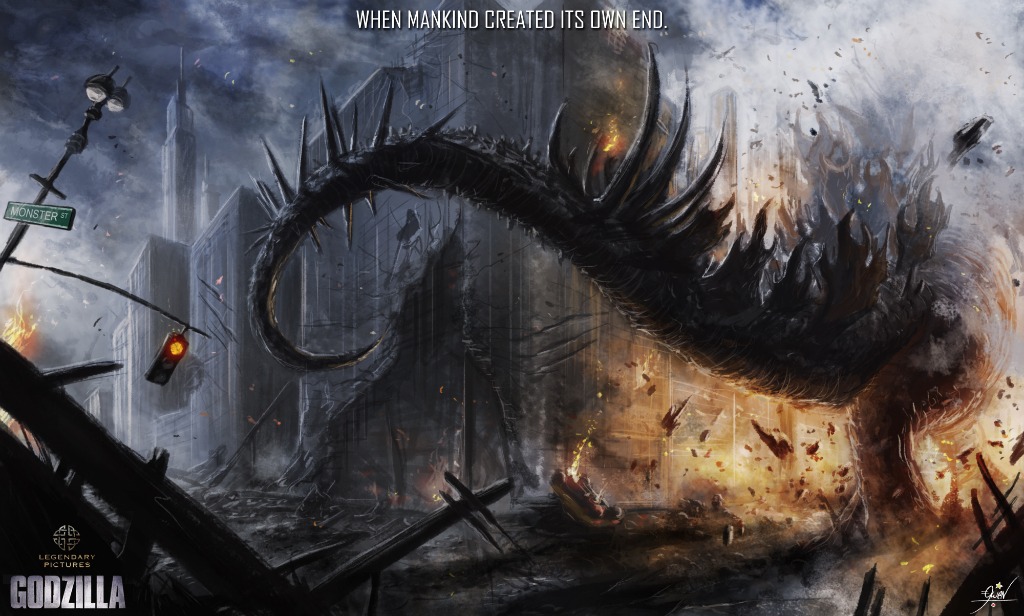 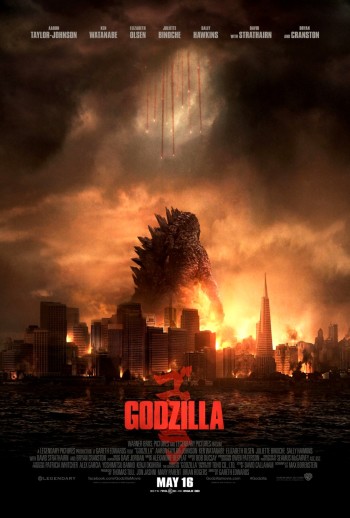 SYNOPSIS: The world’s most famous monster is back on the big screen, battling it out once again with other giant creatures who threaten our very existence.

REVIEW: He’s baaaaccckkk! But really, does Godzilla ever really go away? I think not, based on the prevalence of movies starring the world’s most famous monster since the dawn of time. Ok, since 1954, when he first appeared in Ishiro Honda’s film, also titled “Godzilla.” Since then, he’s starred in 28 films produced by Toho Co., Ltd., and has also appeared in numerous other incarnations, including video games, books, comic books and TV shows.

Godzilla has been both a hero and a destructive monster, but interestingly, the theme of nuclear weapons in “Godzilla” movies is just as relevant now as it was in 1954, when nuclear bombings of Hiroshima and Nagasaki were fresh in the Japanese consciousness. In fact, it’s been said that Godzilla himself is a metaphor for nuclear weapons, which makes sense given his radioactive-blue breath (which we get to see in this movie – yay!).

Director Gareth Edwards respects many of the elements of Godzilla through the ages, but yet makes the monster fresh and new with stunning visual effects. Some people have griped about the fact that he doesn’t actually show up in the movie until a good portion of the way through. I don’t have a problem with that. I think it helps to build suspense.

The movie begins with Joe Brody (Bryan Cranston) and his wife Sandra (Juliette Binoche) working at a nuclear power plant in Japan. But when a horrific accident claims Sandra’s life, Joe feels terrible guilt, because he’s the one who sent her into the bowels of the nuclear power plant, and she was unable to get out in time.

Jump ahead 15 years. Joe and Sandra’s son, Ford (Aaron Taylor-Johnson) has moved beyond the accident and now has a young son of his own with wife Elle (Elizabeth Olsen). Joe, however, is still obsessed over the accident that killed Sandra. When Ford goes to Japan to try and get Joe to move back with him, Joe enlists Ford’s help to get back to their old house, which is still quarantined since the accident (and looks like a scene out of History Channel’s “Life After People”).

Joe has always thought that something was amiss. He felt that something — or someone — was sending signals 15 years ago. And when he and Ford are captured and taken back to the power plant, the truth comes out — they’re dealing with the awakening of a giant creature that’s long been dormant. The military is trying to solve the problem, but perhaps the best way to deal with it isn’t human at all. It might be another beast that’s been roaming the seas for years. A beast known as Godzilla!

This movie starts with a bang (literally), and I was so excited to see Bryan Cranston doing his best Walter White impression inside the nuclear power plant. It not only made me love “Godzilla” right off the bat, but it made me yearn for another 4 or 5 seasons of “Breaking Bad.” But then … without giving too much away … the action suddenly shifts to his son, played by Aaron Taylor-Johnson, who I’m sure is a great person and a fine actor, but I really wanted more Walter White! I mean Bryan Cranston!

At any rate, despite the movie needing more Cranston, we do get lots of Godzilla as things progress. In fact, there’s a tad too many long sequences of monster-fighting in the third act. Still, it’s Godzilla, and you can’t go too far wrong when the star of the movie is a massive monster who’s actually a good guy trying to save the planet from other monsters.

The stunning cast, which in addition to Taylor-Johnson, Olsen, Cranston, and Binoche, also includes Sally Hawkins, David Strathairn, and Ken Watanabe, gives this version of “Godzilla” a sense of authenticity we haven’t seen in some of the earlier cheesy versions (i.e. “Godzilla vs. Megalon, Godzilla vs. Gigan, and so on and so forth).

This version of “Godzilla” is both thrilling and moody, high-action and thoughtful, forthright and mysterious. It’s also a family movie, as much of the storyline is focused on the relationship between Joe and his son, Ford and his wife, the loss of Sandra, etc.

I must confess, I was a little confused about how the otherworldly creatures — the spider-like M.U.T.O.’s (Massive Unidentified Terrestrial Organisms) fit into things. Godzilla fights them. The humans fight them. But are the humans also fighting Godzilla? Apparently, he ends up being the good guy monster here, which sets things up for more “Godzilla” movies.

As mentioned, some of the battle scenes are overly long, as well as dark (as in, hard to see). And there’s a fair bit of explanation, which tends to drag down the storyline. Also, Alexander Desplat’s foreboding score sort of makes one scene flow into the next, so that it’s one massive scene after another (the fight scenes, that is).

But there’s a lot to love here. It’s a monster movie, a disaster movie, a life-after-people movie, and best of all, a family movie. And it’s a lot of fun seeing giant monsters rip through a city, toppling buildings, trashing landscapes, tossing cars willy-nilly, etc. We all live in such controlled little worlds, sometimes it’s fun to see that mayhem played out on the big screen.

Violence/Gore: Mass destruction is everywhere, though very little blood is shown. Cities are leveled, and creatures stomp on humans and toss vehicles, subway cars, boats and such. The body count is high, and kids and animals are shown in perilous situations, including a bus full of children on a bridge being destroyed by a monster. A husband sees his wife die behind a glass window and is unable to help her.

Will Parents Like It? Despite the fact that two couples sitting near me got up and left early in the movie, I still love “Godzilla” and think it’s a fun kick-off to the summer blockbuster season. It’s a great family movie, in that Joe is a devoted husband who won’t stop until he figures out the truth behind his wife’s death, and Ford grows up to be a caring husband, father and son.