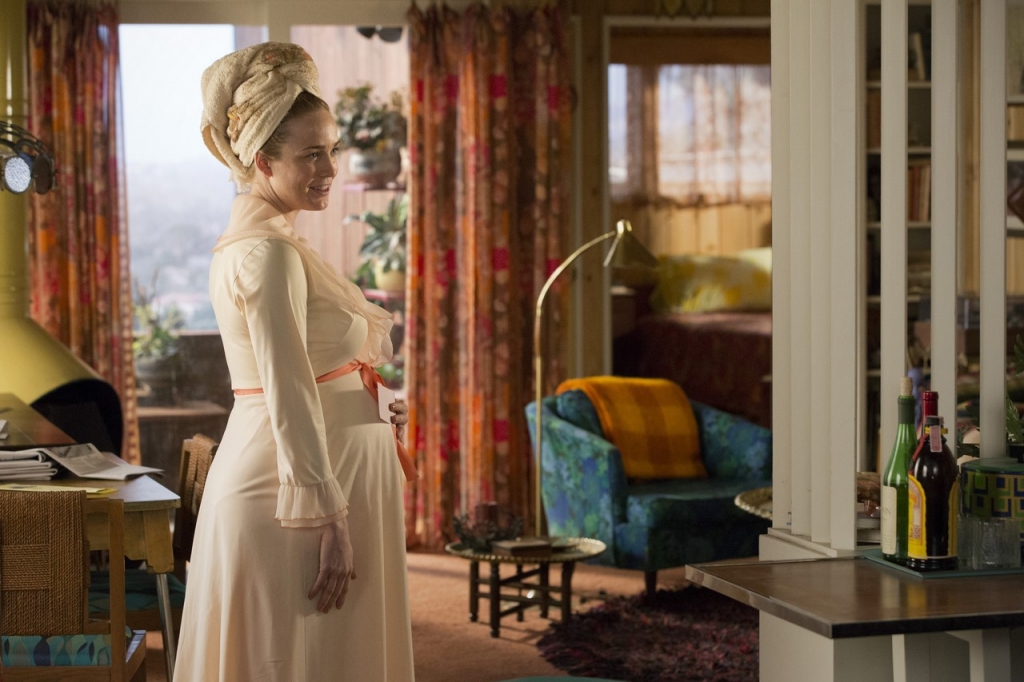 By now you may have heard that this week’s episode of “Mad Men,” titled “The Runaways,” was a doozie. The tipoff was a warning about adult content at the top of the broadcast. (I’m not sure how many previous episodes have come with that warning.)

In short, Stephanie, Don Draper’s niece, calls Don collect from L.A. at his office in New York. Don sends her to Megan’s, who welcomes the far-along pregnant and bedraggled woman, only to snap when Stephanie states that obvious, that she knows Don Draper’s secrets, and sends her packing with a $1,000 check. (Which is $6,564.76 in today’s dollars, according to an online inflation calculator.)

Lou Avery is an aspiring cartoonist. (Scout’s honor!) Don, once in L.A., watches Megan dance all sexy with a man, possibly an artist from her acting class, at her party. Don, who looks increasingly out of place in Megan’s place, doesn’t react. Instead, he goes out for drinks with Harry Crane, who happened to show up at Megan’s party with an aspiring actress.

Back in New York, Ginsberg is losing it over the computer. This deterioration leads to a breakdown, with Ginsburg offering his severed nipple to Peggy in a box. The self-mutilation made complete sense to Ginsberg, who describes the gaping wound as a valve, a release of all the ills the computing was imposing on the office’s inhabitants – including turning the men into homosexuals. He’s taken away on a stretcher. Sad, but not entirely surprising.

As for other agency developments, Lou and Ken Cutler have been wooing Phillip Morris, unbeknownst to Don, who you may recall took out a full-page ad in the New York Times in season four declaring that the agency would no longer take cigarette companies as clients. Harry Crane dishes as much to Don in L.A.

What does Don do? Shows up at their meeting, unannounced, stunning everyone, but perhaps setting the stage for either his ascendance at or exit from the agency.

And let’s not forget Betty, who – ha – might be running for office. (Betty Draper for Mayor! Wouldn’t that be rich. These comments stem from Betty telling Henry that she doesn’t know what she’s going to do when he tells her she should run for office.) She and Henry, domestically blissful in season six, are at loggerheads about all sorts of things. He wants to end the war, she supports it—and says as much at a progressive dinner that starts in their home. Later, Betty wants to sit in the kitchen and read, and Henry wants her to come outside. Sally comes home, injured in a sword fight with golf clubs, and is nastier than nasty.

My head is spinning from writing this summary. This was one of the more unsettling episodes for me as a viewer. Ginsburg’s self-mutilation and descent into madness were disconcerting, even though we’ve had clues that he was on the edge, or possibly just on the spectrum, all along. Otherwise, the ménage à trois was both provocative and mindless and left a dull void. Megan seems a social dominatrix with her friend Amy, who is giving her a pedicure when Don calls about Stephanie and who also washes Megan’s dishes. What the what? In the bedroom, Don seems disconnected, as if he’s going through the motions, too bewildered and too tired to take a pass. Which is what he seems genuinely to want to do.

The only time Don lights up in this episode is when he talks about or to Stephanie. And the thing I can’t stop thinking about in this dense episode is Don Draper telling Stephanie that she is his niece. Because of course she’s not. Because he’s not Don Draper. (She knows that. She even calls him Dick in her first phone call to him.) This is an identity relapse of the highest order. Don Draper, who at the end of season six seems to be accepting his Dick Whitman past, is clinging to a personal history, one that includes Anna and Stephanie, that exceeds simple identity fraud. And that is perhaps the most puzzling aspect of this episode.

Taken together, it’s as if many of the characters here are internalizing the hierarchical chaos of the 1960s. Where’s the internal peace and love?