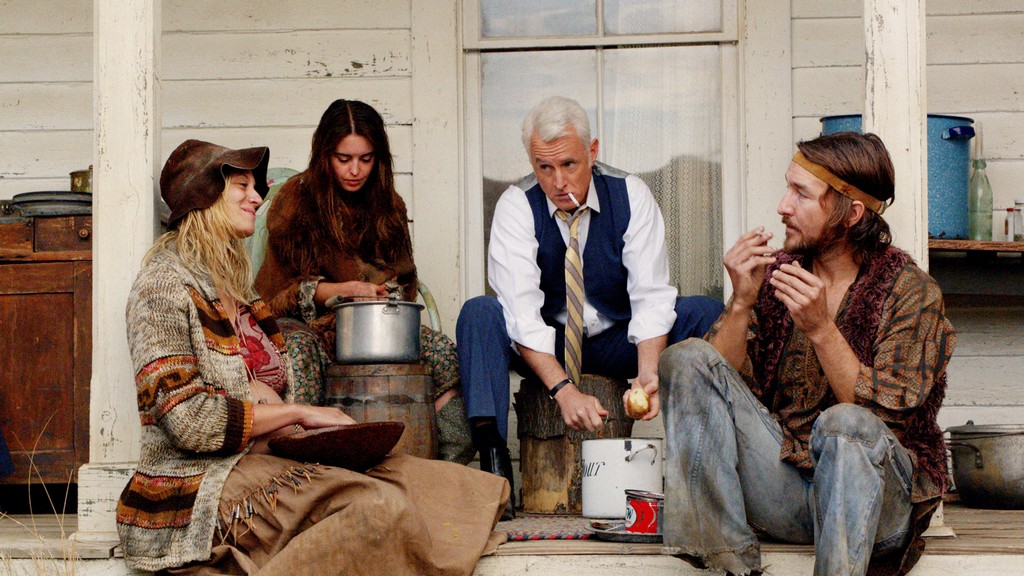 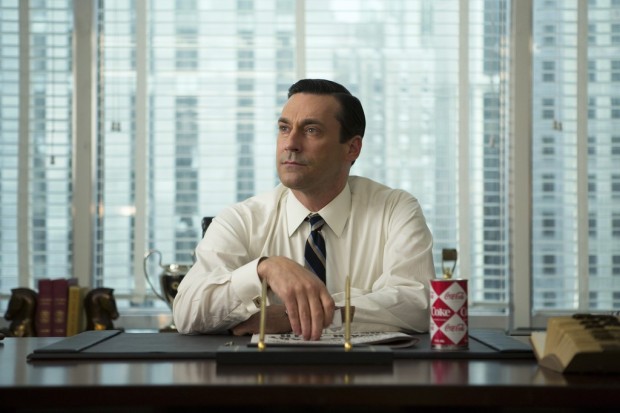 Lane’s shadow looms long over this week’s “Mad Man,” in an episode titled, “The Monolith,” in symbolic and literal ways. I always held Don responsible for Lane’s suicide, because he really didn’t have to fire him, he could have given him a second chance. He of all people had no right to hold Lane to a level of trust that he never imposed on himself. When Lane implored Don not to fire him, Don told him he could start over. I remember yelling at the screen over this one. Really, Don Draper? At Lane’s age? It was as if Don Draper thought reinvention went on forever, like some bloody carousel.

Now, nearly fired himself, his second marriage possibly over, Don Draper is learning there are limits to reinvention. In this episode, we see just how much of an outsider/pariah Don is. No one tells him about the agency-wide meeting to announce the purchase of a computer, which is going to take over the creative room. (This is like a death, the loss of a character. I can’t believe we’ll never see the banter among the creative in that mumbo-jumbo room again.) Oh, and the computer purchase itself? Isn’t that a partner decision? Don asks. Yes, Roger tells him. But it preceded Don’s return.

So, what happens in this episode? Not much, and yet plenty. We open in L.A., where Pete learns that his father-in-law had a heart attack and Burger Chef is up for review. Back in New York, Lou Avery suggests Peggy lead the effort, with Don on her team. Lou gives Peggy a raise as well. Don is not happy with the development, and instead of working on his assigned 25 tag lines – absent a strategy, because Lou likes to see the tag lines first – he frets. He chats up the guy overseeing the computer installation. Sensing, quite correctly, a potential client in a growth market, Don goes to Burt Cooper’s office and makes a pitch, his business and creative genius afire. That’s the old Don, the Don that took this agency to the next level. But Burt shoots him down, quite mercilessly and irrationally, asking Don just why he came back, noting that the firm was doing fine without him (which is highly debatable) and reminding Don he’s in a dead man’s office. (To which I wish Don had said, “Oh and you have long for this world?”)

On some levels, I get the agency’s repudiation of Don. It was one thing for him to act out all those years, disappearing – one, for several weeks, going on impossibly long lunches, etc., etc. But the Hershey moment made his extravagances public and sullied the firm’s reputation. Still, there is a heartlessness here, and a lack of humanity, that no one besides Freddy Rumsen and Roger Sterling seem interested in Don the man versus Don the employee.

Bert’s rebuke inspires Don to go to Roger’s office and pilfer a bottle of vodka. The man is engaging in high-risk behavior. He drinks, in Lane’s old office, on I believe the same couch, which, if you remember back to the episode in which Lane hangs himself, is quite upsetting even if they changed the furniture. Don gets sauced and tries to corral Freddy Rumsen to go to a Mets game. (The inspiration for a Mets game was Don finding Lane’s old Mets’ pennant under the radiator.) Freddy sees how drunk Don is, and takes him to his place.

Roger is having a family saga. Mona and Margaret’s husband Brooks show up, to Roger’s surprise, because Margaret has run off. Brooks wants Roger and Mona to watch their son Ellory while he goes to get Margaret. Mona tries to get Roger to do it. Brooks won’t have it. Mona moans, and the next thing we know, Roger’s secretary is reading aloud the message, “Hey genius, Brooks is in jail in Kingston.” One of the funniest lines on “Mad Men” ever!

So Roger and Mona, in a fur coat, go to a commune (on a farm that looks like the same house where Dick Whitman grew up) to try and rescue Margaret,who now goes by Marigold. Roger gets stoned with his daughter, they fall asleep next to each other in the haystacks, reminiscing about Jules Verne and the stars, and Roger sees Margaret going off with a man … The next morning, he tells her, Enough. She’s a mother. And picks her up and tries to carry her off. But they fall in the mud, and she reads him the riot act for not being there for her when she was a child, and she stays. And how Roger gets home all muddied is unknown.

That Freddy Rumsen, he is saving the day. He tells Don not to give the agency what it wants, which is for him to fail. Pep talk Freddy! And he throws in a dose of relativity. Would, Freddy the Freelancer asks, Don like to be like him, going from office to office? Don sees the light, goes into work and tells Peggy he’ll have his tag lines for her by noon. He’s doing the work! Fred showed him the light!

As for the computer, this is one of those negative space moments, where there’s more to the development than the lines allow. So much is going on here, in terms of where the culture and the economy are headed. I do wonder if a firm this small would have invested in a computer. I assume, given “Mad Men’s” reputation for research, that this was happening.

Meredith: She is the funniest secretary! That voice! That hair! Those lines!

The music was upbeat!

The Kubrick/Space Odyssey references. Sorry, but they completely escaped me. I’ve never been a Kubrick fan or student. I only realized there was an abundance of them because of tweets to that effect.

Peggy Olsen: She didn’t look as lovesick in this episode. Thank goodness.

Next week: I might have to miss my recap, due to work obligations. But I’m going to give it my best shot.