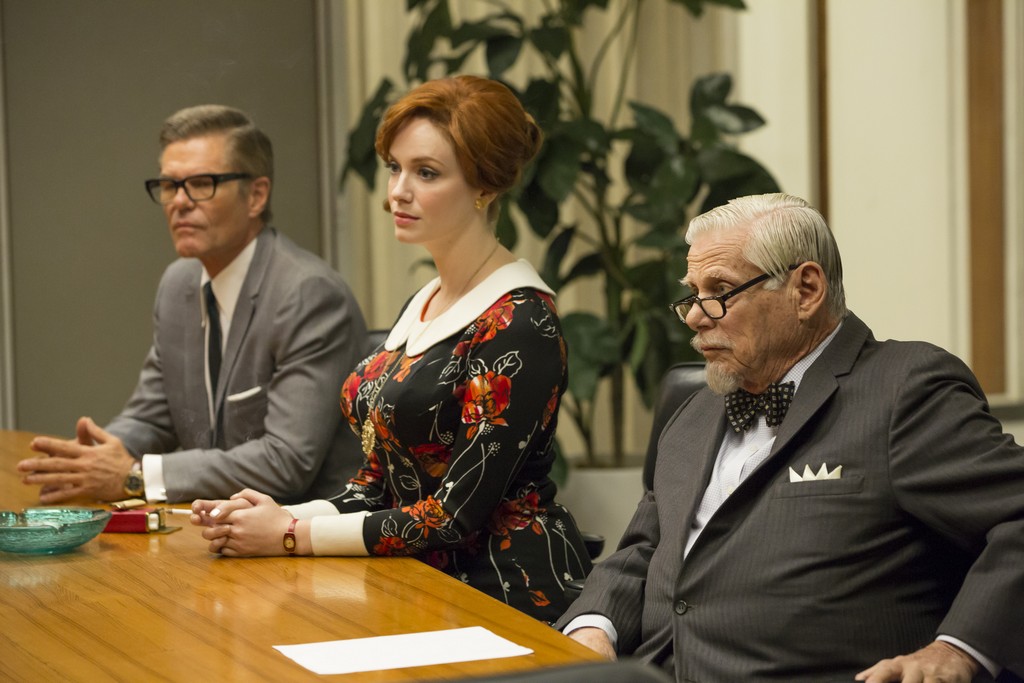 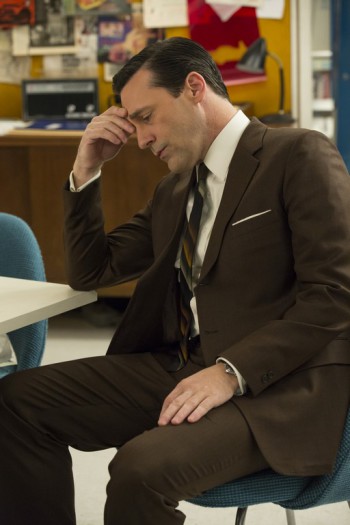 By the time 11 p.m. rolled round this past Sunday evening, I’d culled the main points of the latest “Mad Men” episode, “Field Trip,“ from the #MadMen Twitter feed. Don goes to L.A., unannounced, to visit Megan. Megan breaks up with him when she learns he’s been lying and hasn’t been working for three months. Betty and Francine lunch and Francine talks work. Don gets a job offer, goes to Roger’s, unannounced, who tells him he’s missed him and to come back to the agency. Betty plays chaperone on an outing with Bobby’s class, to a farm. She smokes on the school bus. She drinks fresh cow’s milk from a bucket. (The sip that launched a thousand tweets!) Don goes to the office, per Roger’s imperative, only Roger’s nowhere to be found and no one is expecting Don – he effectively shows up unannounced — and the partners call an impromptu meeting and decide to take him back with conditions. One of them: Don reports to Lou.

Phew! And watching the show the next evening made it all the more intense. But per usual, I am getting ahead of myself. First, a few things from around the Internet. The “Mad Men” cast has largely remained off Twitter, but this past winter, January Jones started an Instagram account and it’s just brilliant. She’s really, really funny. She only joined in January (when else would a January join but in January?). One post this week was a line from Sylvia Plath with the hashtag #poemstohelpmefindBetty. The too-muchness is exquisite.

Speaking of poetry, the Paris Review interview with Matthew Weiner is available online. He discusses his childhood, books, writing poetry at Wesleyan, movies, film school, “The Sopranos,” “Mad Men.” The New York Times also featured him in its “By the Book” column.  TV Guide ran a Q&A with Allan Havey, the actor who plays Lou Avery, the character everybody loves to hate, at least this season.

So, the episode. Here were are, at the end of the work week, and all I keep thinking about is Don Draper and work. His employment status dominated the plot – despite words to the contrary, I don’t think he and Megan are done, and Betty’s storyline is a continuing exploration of motherhood – and I’m marveling at the calculus he made to decide he’d basically do anything to get back to work at SC&P. The whole thing was complicated, practically painful to witness, Don walking gingerly into the office, expecting people would be expecting him, and gradually realizing that they were not. And the creative fellows clamoring for his input, with Don sitting there, looking out of place, almost like an adult sitting on one of those small chairs of a kindergarten class.

And the partners! What terrible business acumen. They’re not even clear if they fired him or not. Joan surprised a lot of people by not backing Don, but it makes sense that his twin hijinx around the Jaguar dealers account and the surprise merger, the latter of which, as least as I remember it, scotched the IPO that would have set up Joan for life, yes, it makes sense. Her line to Don at the end of season six, wishing he’d use “we” once in awhile, foreshadowed this change of heart.

As for Peggy, she’s so off the deep end right now, her nasty comment to Don came as no surprise. Damn it, girl, not staying involved with Ted Chaogh was for the best. These married men almost never leave their wives. What was particularly disheartening is how callous everyone was about Don. No one expressed an iota of concern about the man. And thank goodness Pete wasn’t at the partner’s meeting! Even though his allegiance to Don seems firm, he might have brought up the assumed identity. This time, Bert Cooper might not have not cared.

So the terms. Pretty brutal. Stay on script. Partners must approve. No drinking except with clients. No being alone with clients. (That is just bizarre.) Perhaps the partners didn’t expect Don to accept. Who knows? And why did he? The job offer was playing into his old hand, the drink, the women. In a strange way, these people are a proxy for family. (Offices often assume the psychological dynamic of extended family, with undulating allegiances and shifting factions.) Ha, and the stipulation of them all: reporting to Lou. All I know is it’s time to fasten our seat belts. We’re in for a bumpy ride!

Misremembrance of Things Past: I feel sheepish about this, but I erred in last week’s recap when I rather ceremoniously suggested that SC&P was a new logo and a sure sign that the firm would not take back Don. Well, that’s the name the merged firms came up with last season after much dragging-of-the-feet. It was quite explicit. I simply forgot! Which is humbling. I’d recently rather virtuously noticed factual errors in some pretty top-flight recaps. It happens to the best of them!