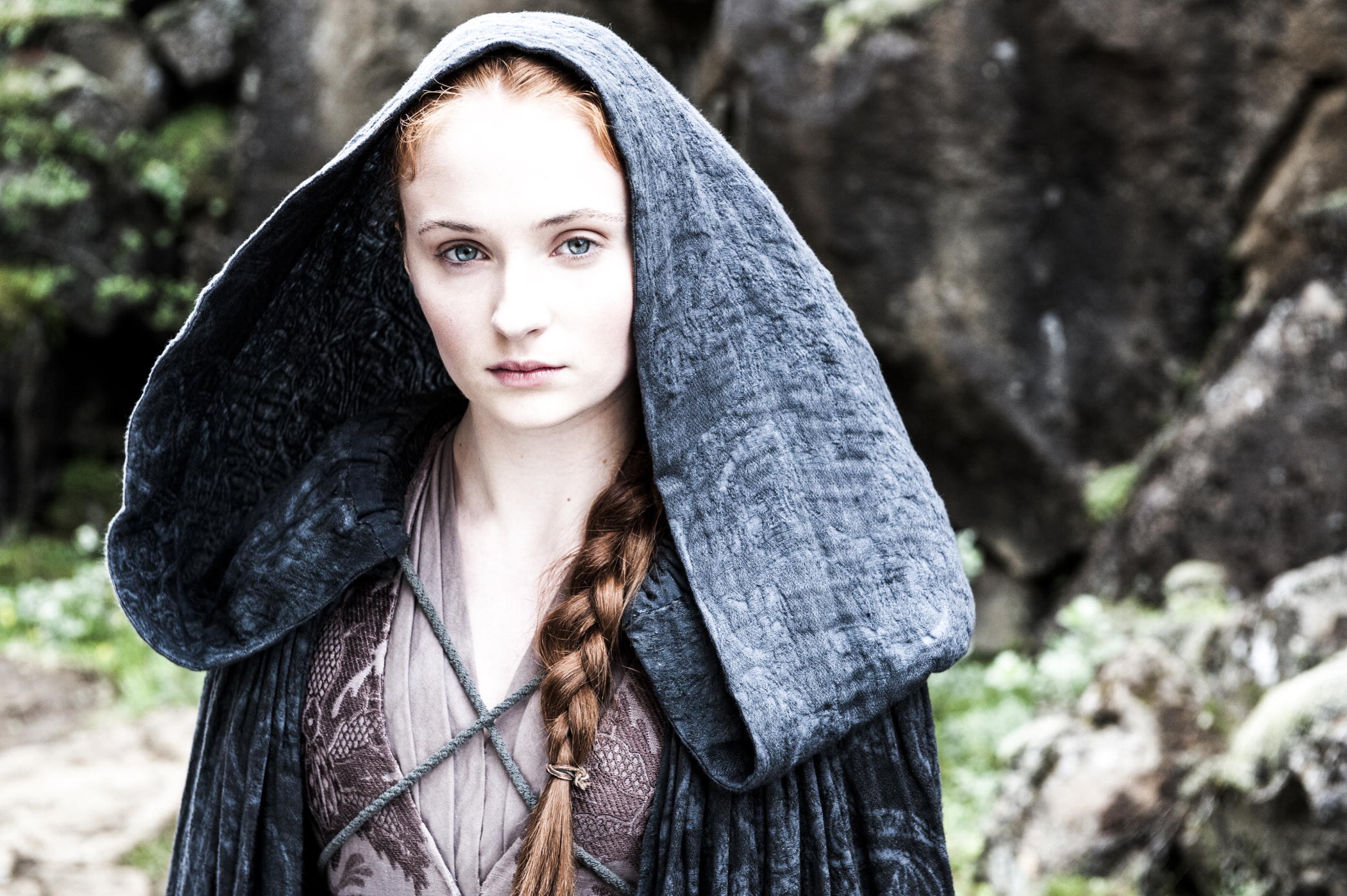 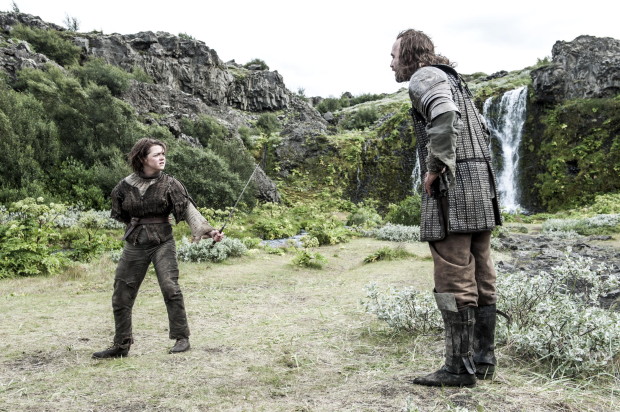 This week’s episode of “Game of Thrones” shed some light on how deceitful and cunning Littlefinger really is. Our Lord Baelish might be the most unlikely yet most powerful and dangerous man in all of Westeros. When he and Sansa reunite with his bride (and Sansa’s aunt) Lysa, we find out how underhanded this guy is.

It was at Littlefinger’s request that Lysa poisoned her husband. She then wrote a letter to Catelyn, her sister, claiming Cersei murdered him which started a cascade of events that began with Ned Stark taking over the royal duties of her now-dead husband. During his duties he discovers Cersei’s incestuous relationship with her brother Jaime and the illegitimacy of the heirs to the Iron Throne. Of course, this led to heads rolling, namely Ned Stark’s, and launched everyone into war.

Lysa is off her rocker and even Littlefinger knows it, but he’s playing his cards very carefully – he certainly has more planned. She be crazy with a capital “C” and a couple extra Zs. Cray-cray Lysa accuses Sansa of sleeping with Littlefinger and then just as quickly tries to comfort her but then promises Sansa she’ll wed her own little cousin as soon as Tyrion is dead. Sansa just needs to run away from the Lannisters and the Starks – nothing good comes her way from being around any of them. Certainly, she must be thinking: Can I please just live a quiet, normal, non-bloody life?! 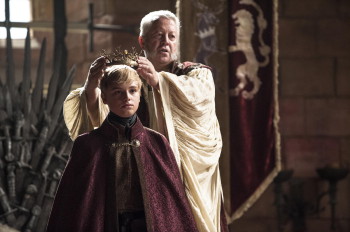 Tween King Tommen is officially crowned king as he makes googly-eyes at Margaery. Before she can blow him a kiss, Cersei gives her the evil eye and makes her way over to her. You think the threats are going to roll, but they come to an agreement and even Cersei admits she knows Joffrey was pure evil. Margaery taunts Cersei with the question of what she’ll call her – “Sister? Or Mother?” Hey, Marg – don’t stick your hand in the fire, you’re going to get burned.

Not a lot of screentime for Dany in this episode, but…

She learns of Joffrey’s death and smiles to herself when she learns Daario has taken the Meereen navy for her because he “heard she likes ships.” Trying to cover a smile, she contemplates whether or not to attack Kings Landing with this new navy Daario has procured for her. Ser Jorah, not to be outdone, tells her that the cities of Yunkai and Astapor that she freed have been retaken and are under slave rule again. 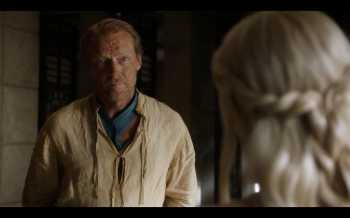 She asks for a moment of privacy but then asks Jorah to stay. You can almost see him doing the Snoopy dance, gleeful he might have a chance to get out of the Friend Zone, but she only asks him for his wise counsel. She decides to stay where she is and rule as a queen should.

#Podwatch! Pod and Brienne journey on their merry way, with Brienne giving Pod every opportunity to call it quits and leave. But no way Jose is Pod going to quit being a squire. “I wish I could quit you,” he wants to say, channeling Jake Gyllenhaal in “Brokeback Mountain,” but he stays quiet and continues to follow her.

He’s possibly the worst squire ever – he can’t cook, he can barely stay on his horse, but when Brienne learns he killed a Kingsguard to save Tyrion, she gives in to his persistence and allows him to help her with removing her armor (bow-chicka-wow-wow #BrieDrick #Podrienne) and so the squire lessons begin. 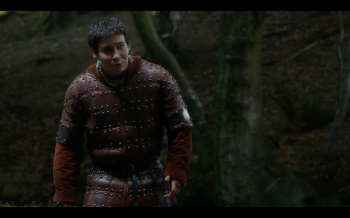 Over by a stream somewhere, Arya practices her Cirque du Soleil routine/swordfighting skills much to the Hound’s amusement. While Pod will surely grow and flourish under Brienne’s tutelage, the Hound practically browbeats life lessons into Arya. Today’s lesson: All the waterdancing in the world won’t beat a suit of armor and a proper sword.

Here’s what I’d like to see: In their respective travels, Arya and the Hound cross paths with Brienne and Pod and it’s love at first sight for everyone. I think I can ship #Podrya and #TheBround. Who’s with me here? Brienne and the Hound – that would make for some interesting TV, for sure!

Over at Craster’s Keep, Locke tries to kidnap Bran, but Bran wargs into Hodor and has Hodor kill Locke (somewhere Jaime’s phantom right hand tingles in delight). Hodor comes out of the warg state a little dazed and confused. Bran has the chance to call out to his brother Jon Snow, but has to decide against it if he wants to continue north to look for the three-eyed raven. #SoClose 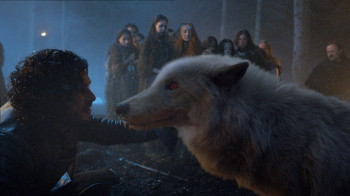 Finally, Jon Snow and the Night’s Watch raid Craster’s Keep. He encounters Karl, who takes on Jon with two daggers like he’s working the teppanyaki grill at Benihana. I was hoping for an onion ring volcano here but never saw one, but I did get a good funeral pyre. The remaining mutineer escapes through the forest but meets his untimely death by Jon’s direwolf, Ghost, who returns to his master as they watch Craster’s Keep burn to the ground.

What did you think of this episode? Tell us on Twitter at @BeTheBuddha and @ReelLifeJane!