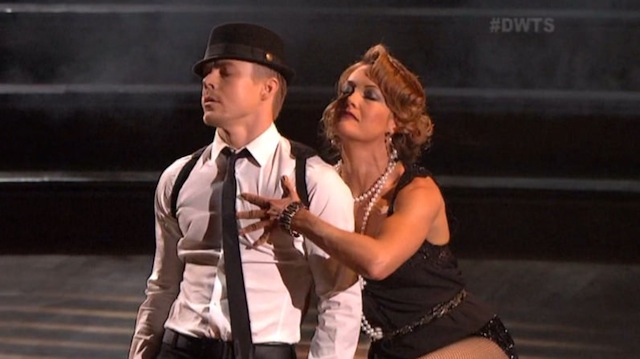 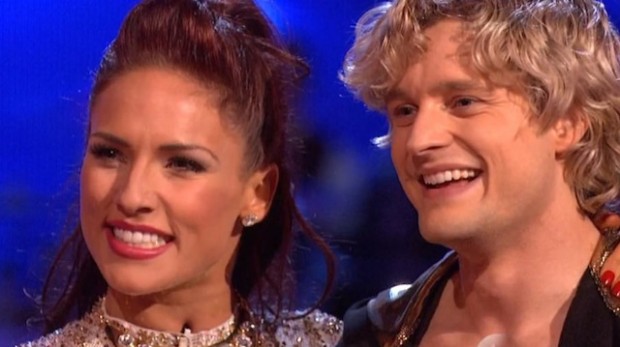 Welcome, dance fans, to American Icons night, and the “Dancing with the Stars” semi-finals! I can’t believe we’re almost at the end of the season. It flew by.

I also can’t believe the shocking elimination tonight, as one of our three Olympians goes home. James and Candace are both announced as safe very early in the show, leaving Amy, Charlie, and Meryl in jeopardy—the first time in the bottom for two of these competitors. Once we knew it would be one of these three, it seemed likely that Charlie and Sharna would be the ones to leave. Such a bummer. My original favorite is eliminated, and we didn’t even get to see their final package.

It’s going to be another tough decision for my Top 5 dances tonight with so many great routines, especially in the second half of the show. There’s a lot of iconic dancing to go with all this exciting iconic music, from Michael Jackson to Elvis to Bob Fosse, at least according to guest judge Kenny Ortega.

In fact, the choice for my Top 5 dances is so difficult that I’m listing a bonus dance and going with 6! That’s mostly because Amy Purdy is so amazing, I couldn’t leave out one of her dances.

So here we go: My Top 6 dances for American Icons night:

Charlie and Sharna’s Fox Trot: Despite Charlie’s difficulty with props (you’d think Sharna would stop using them), Charlie’s dancing is gorgeous, and this fox trot is no exception. He’s so classy and stylish, and adorable, and dances not one, but two solo passages very well. I find the final solo a bit out of place (those assisted kicks were odd too), but he performs it well. I actually like both Charlie’s dances tonight equally well, but this one suits his personality so much more. The samba has a strange mix of hip-hop music and classic ballroom style that doesn’t quite work. I blame the strange juxtaposition, more than I blame Charlie, on the lack of funk in the routine. I also like his glasses, and I love seeing him psych himself up in front of the mirror. So cute.

Amy and Derek’s Quickstep: Amy’s done it again. She is just amazing, and definitely an athlete. I think I’m usually so gobsmacked by what she’s doing and how she’s doing it that it’s impossible not to be impressed—especially when she wears a different kind of foot. These new bouncy feet remind me of Olympic runner Oscar Pistorius and the former controversy surrounding him (not the one involving his girlfriend): I almost wonder if those feet are an advantage.

As I mentioned last week, it’s definitely a novelty to see her dance. That said, I think there’s no question that she’s a great dancer, and knows what she’s doing. I’m really surprised Len has a problem with this dance because it’s stuffed with content. Derek didn’t mess around with unnecessary concepts, it’s just pure quickstep. It looks great to me. She’s astounding.

James and Peta’s Cha-cha: Here too, I actually like both of James’s dances—the rumba isn’t so over the top sexual, for a change—but this Michael Jackson-flavored cha-cha has a great mix of styles. Carrie Ann is right: James captures the MJ style really well because he remains true to himself.

Meryl and Maks’s Jive: I’ve never been one to swoon over Maks the way others have, but boy did he look great as Elvis. (I think it’s the sideburns, at least for me.) He looks great dancing and doing Elvis moves, and of course Meryl is right there with him. This is a fun routine, though I don’t think that pencil skirt was the best choice for Meryl given those wacky knees at the beginning.

Candace and Mark’s Jazz: I’m sure the fact that I haven’t heard Janet Jackson’s “Nasty” in an age has something to do with it, but I really enjoyed this routine. It strikes me as more ’80s than Bob Fosse, except for the hats and costumes, but that doesn’t detract from the dance. Candace looks great doing it, very clean and sharp, and she’s clearly having fun. She could still be more relaxed and more confident, because she’s got it. She’s getting in her own way again, so I hope she can get that confidence back. Especially now that she’s actually through to the finale.

Amy and Derek’s Jazz: Too Darn Hot indeed! That was smokin’! Perhaps it’s unfair of me to include Amy twice (hence this sixth Top routine), but she’s just too amazing. She looks really terrific, she dances extremely well, and she plays the character. She’s not just an athlete, but an artist, and better at acting than some of the actors on the show. Carrie Ann robbed them of their perfect score because their footwork is clearly out of sync at one point, but I wonder if it’s Derek’s mistake, not Amy’s. Her confidence shines at that point, while he looks slightly flustered. I also love Tom’s post-routine introduction: “Amy, Derek, and a very happy table.” You rock, Tom.

So what do you say, dance fans? Are you sad to see Charlie go? Are you ready for next week’s two-night finale of “Dancing With the Stars”? Who do you think will take the mirror ball?