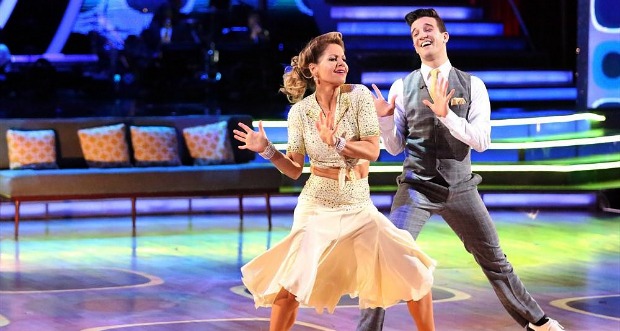 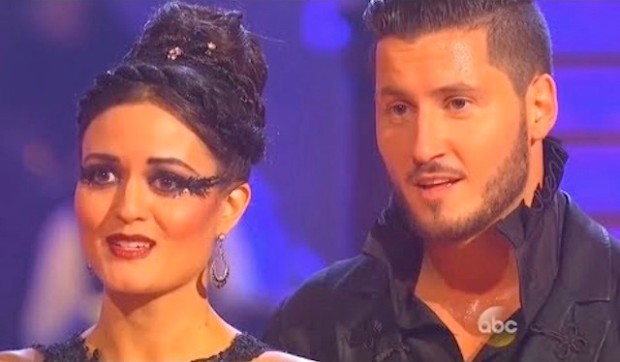 What a spectacular night of “Dancing with the Stars!” The competition has been so strong this season, from the get-go, and there are absolutely no weak links tonight. Everyone does great, and the fascinating new Celebrity Dance Duel really pays off (even though it isn’t quite as groundbreaking as I expected it to be).

We don’t need Tom to remind us that the show is liiive; it’s too awkward for it not to be, especially when there’s a new guest judge who isn’t quite familiar with how things work. That judge tonight is Abby Lee Miller from “Dance Moms,” but she gets a sense of it after that first critique. I don’t mind Abby’s critiques. She’s honest and has smart, constructive things to say, unlike some of the other judges we’ve seen this season. It always drives me a little nuts when the audience boos the judges’ comments, because constructive criticism is necessary, and more often than not, the judges are completely right. My only problem with Abby is her crackly voice. Does she smoke too much, or is just from years of screaming at her students?

Mark Ballas kicks off tonight’s show by singing and playing guitar—and then dancing—to his new single, “Get My Name.” While I liked the song enough—it sounds like another Blurred Lines, which in itself sounds like a revamped “Got to Give it Up” by Marvin Gaye, I really enjoyed the dance routine much more, with its great lindy hop and pop moves (Michael Jackson crotch-grab, anyone?).

The competition is so tough tonight that as much as I enjoy the opening number, it doesn’t make my Top 5. In fact, there’s quite a bit of repetition in my Top 5. Everyone dances so well tonight, but the same few dancers happen to stand out so much more.

Here are my Top 5 routines:

Charlie and Sharna’s Quickstep: After a visit from his mom, Charlie gets his focus back, and really sticks to it in this quickstep. The dance suits him very well, too, because he’s classy and has that style, as well as being adorable. Like Bruno, I too love the bits of Argentine tango built into their quickstep, which is sharp and clean, as well as fun. And they finally get their perfect score. Rightly so.

Candace and Mark’s Fox Trot: I really love this Lucy and Ricky 1950s throwback fox trot. Candace and Mark are both adorable and dance beautifully. Candace really turned a corner, starting with last week’s awesome tango, and totally has her mojo back for good now. Yes, the dance suits her personality perfectly, as she mentions, but there’s a world of difference between her dancing tonight and the last few weeks.

Amy and Derek’s Argentine Tango: Oh my goodness. Amy astounds again. We all know I’m a sucker for Argentine tango, but I wasn’t expecting as much this time, because I wasn’t sure how Amy would adapt to the difficult movements of the Argentine tango. Boy, was I wrong, and I’ll never underestimate her again—which is probably exactly the point of having her on the show. I hate to say that there’s a novelty factor inherent in Amy’s dancing, but there is. However, there’s so much more to it than that, because Amy really does a phenomenal job. It almost seems like an unfair advantage for Derek, who’s already won more Mirror Balls than any of the other pros.

Amy is absolutely amazing. This dance is mesmerizing. I had to watch it at least twice. Something doesn’t quite work with the stool that second time, but that doesn’t matter much. Derek gave Amy excellent choreography that really shows her strengths, and they of course dance so well together. Right from the start, they grab the audience’s attention and keep us spellbound until the end. I also love the arm movements, which look like tutting. Just Wow.

Charlie & Sharna and Mark & Candace’s Contemporary: Wow, I cannot put into words how much I love this routine. The concept of having Candace’s feet not touch the floor during her 20-second break with Charlie is very cool, and they pull it off really well. Fascinating. She and Charlie both dance contemporary so well, just like Candace’s first week on the show, and as Carrie Ann said, they both embody the same quality of movement, even though they’re completely different dancers.

I also love the general concept of the piece. It really speaks to me. It’s powerful and so emotional—yet not angst-ridden or heavy handed, like many contemporary pieces. Fantastic.

I just wish “DWTS” would do what “So You Think You Can Dance” does and show replays of the movement while the judges give their critiques. Both Len and Carrie Ann noticed an error that Sharna made, and I still don’t know what they’re talking about.

James & Peta and Amy & Derek’s Jive: Apparently that ankle roll James suffers in the package looks a lot worse than it actually is, fortunately, because this jive is pretty flawless. Super exciting, really fun, full of good content, and danced really well. James and Amy dance so well together, and both look great. Amy’s feet are probably cleaner than James’s; she moves so quickly and has amazing control. I don’t know how she does it. And man, I need me some of those fringy pants, stat!

With tonight’s elimination, the Battle of the ‘90s Sitcom Stars comes to a close. Danica, sadly, is eliminated, just before next week’s semi-finals. What a difficult decision this is, as everyone is so strong. But someone has to go. I’m personally disappointed it’s Danica. While I think James is a wonderful dancer, I’ve been pretty clear about how I feel about Peta, and Danica is lovely and a beautiful dancer.

So how about you, dance fans? Is the right person going home? Are you sad to see Danica leave? Are you excited about guest judge Kenny Ortega, and Derek working with awesome choreographer Chris Scott on next week’s Icons of American Music night performance? Comment below.