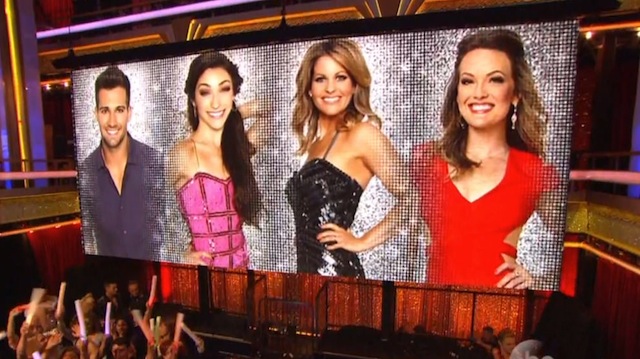 Wow. So here we are, dance fans, it’s the first night of the two-night season finale of “Dancing With the Stars.” Who’d have thought James and Candace would’ve made it this far. Not that they’re bad dancers per se, but I thought it would have been Danica or Charlie—who, btw, were seated next to each other in the audience, and shown frequently on camera. Perhaps the camera guy agrees with me.

It’s kind of an odd night. The judges’ panel almost seems too quiet without a guest judge, but it’s refreshing. There’s no big opening number either, and the competitors’ first routines are ones they had performed previously during Switch Up week. They’re probably saving a little strength and energy for Tuesday night’s massive two-hour finale. Incidentally, I’m still sad they no longer do the DanceCenter segments.

The episode still had plenty of drama though, especially between Candace and Mark. She broke him in rehearsal, and it looks literal. He came out with his arm in a sling, and I thought he had fractured it, but he injured his rotator cuff. Fortunately, a doctor cleared him just before they’re scheduled to perform.

By the way, good for Tom Bergeron for giving a shout out to the crew. I’ve seen a couple episodes of the show live, and the carefully choreographed ballet that happens off camera, as the crew expertly and swiftly moves large set pieces on and off the stage, really is fascinating to watch.

Let’s get on with the dancing! With only four couples left, I’ll address all four, and choose my favorite between their two dances:

James and Peta: Both of his dances are great tonight, and very different. I don’t really remember his tango from the first time, when he danced with Cheryl, but tonight’s is pretty exciting. Except that “real kiss,” which kind of grosses me out. That’s what deserves a slo-mo replay on this show? That makes me sad.

Meryl and Maks: I definitely remember this Argentine tango from the first time around, and it’s equally as sexy and exciting this time. I just love Argentine tango (as I’ve mentioned here several times), and this is a classic example. Meryl’s a beautiful dancer; everything is so easy for her. And those arms! Wow, she’s cut. This is absolutely gorgeous and breathtaking. I love those double chassés across the floor. I don’t love that costume, but the dance is stunning. In fact, both of these dances are so great that I’m including both of them here.

Their freestyle is also totally breathtaking—and quite a risk. The freestyles tend to be fun, party-time dances—very different from this quiet, emotional contemporary piece. Except that it’s Meryl and Maks. They can do anything. As Len said, “There’s good, there’s great, and then there’s Meryl.”

I really appreciate their taking this risk, and keeping it pure dancing, free of gimmicks or even story. It shows that Maks knows how capable Meryl is that they can rely on dancing and her abilities, and they don’t need all that extra fluff. She’s amazing, a total ragdoll with no fear, yet great control when she needs it. That flip lift is so exciting, and this routine is daring and absolutely gorgeous. Good choice of music too.

Candace and Mark: Candace really turns on the fun tonight, in both her dances. She’s still nervous and unsure, and it shows, but at least she’s enjoying herself. It’s a little unfortunate that she’s still in the competition, as much as I like her. She’s very sweet and a really good person, and not a bad dancer, but others are better. That’s my biggest problem with this show: that popularity and votes win out over strong dancing. Their quickstep is definitely a little rough, and she needs to keep her confidence up and really go for it. At least she’s having a good time.

In fact, it’s very clear that Candace enjoys the freestyle, which is definitely her better dance. I’m surprised she received such low scores (8s across the board) because I thought it was pretty clean. They also do some very difficult lifts—and that’s with the added fear of aggravating Mark’s shoulder. She deserves better scores. It’s so clear she’s having a blast, and it works for her. She should always start her routines with a little freestyle boogie. (Cute play on her character name from “Full House” too.)

Amy and Derek: Fortunately, Amy is becoming less of a novelty (I don’t even notice the feet anymore), because now she can really stand out as the amazing dancer she is. She moves like a professional dancer. It’s pretty incredible. What’s also amazing is how did she not hit her head on the floor in that crazy salsa move. I’ve seen that move before of course, but that really looked close.

Their freestyle is equally as impressive, and beautifully danced. Also a risk, in the way Meryl and Maks’s contemporary is, but it has a different feeling, more uplifting and exciting, whereas Meryl’s is more raw emotion. I agree with Len that the aerial rope is slightly gimmicky, but it’s also really cool and very uplifting. Heh, heh. Literally. Seriously, she looks like a professional who’s been doing it most of her life. Breathtaking.

With all the exciting dancing, I forgot there was an elimination—and frankly, I wish we could forget. I’m disappointed that James is out, while Candace remains. Quite surprising. I feel badly for her because the audience booed the result, but I also agree with them. James is definitely the stronger dancer.

What did you think, dance fans? Did you vote for Candace, or has she stayed too long? Do you think she could possibly take the win? Which was your favorite routine tonight? What do you expect for the season finale, and this 24-hour fusion challenge? Chime in below.