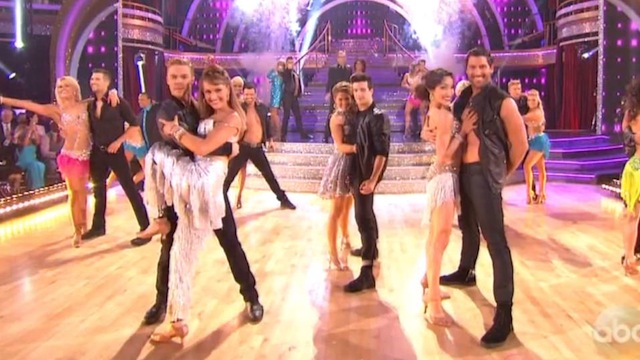 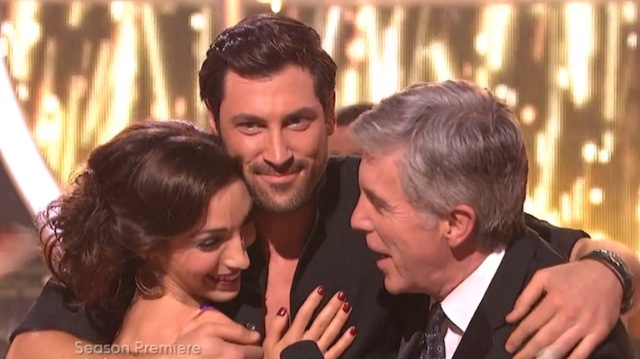 We have a winner, dance fans! The two-night season 18 finale of “Dancing with the Stars” has finally come and gone, and we have a winner. The result is ultimately not too surprising, fortunately, but it’s a very tough competition between the two remaining Olympians, Amy Purdy and Meryl Davis.

Tonight’s full-evening finale event started with the Road to the Finale special, a fascinating look at the three finalists. It’s great to see the stars’ backstories (Amy was a contemporary clogger as a kid!! How awesome is that!) and how they work with the pros. I especially enjoy watching them view and critique their own performances.

It’s a little odd recapping this finale, which itself is a recap of the entire season. All the celebrities return for one last dance. We look back at the entertaining—and totally awkward—moments of the past 10 weeks, and are treated to some behind the scenes moments we haven’t seen. Those are particularly amusing, so I hope we can see more of those in the future. One of the funniest moments, I’m sorry to say, is the accident reel between Derek and Amy, those moments when she hit him with her metal legs. I guess pain can be funny… as long as it’s someone else’s pain.

Of course there are musical performances too, with Ariana Grande, Christina Perri, Iggy Azalea, last season’s winner Amber Riley, and eliminated contestant Cody Simpson. Azalea’s performance is uncomfortable and rough, and she doesn’t seem to remember what “live” means: it means no starting over (the “Clueless”-inspired music video for that song is pretty cool though).

But I especially enjoyed Cody’s and Amber’s performances, especially Amber’s number with the Walgreens dancers. It’s a great mix of dance styles, and many dancers (including several excellent Lindy hoppers, two of whom will be featured in an upcoming swing documentary) worked very hard to make it a success. Kudos to Mandy Moore, again, for her terrific choreography, with this number and with the opening routine.

Much of the show is a bit awkward, as it often is. Everything seems just slightly off, like there’s a little too much adrenaline flowing and it couldn’t be controlled. Ah, the joy and beauty of live television. But that’s part of the charm of the show. You never know what will happen.

Like that hysterically awkward, or awkwardly hysterical, interview between Erin and M&M (Meryl and Maks), where they’re supposed to talk about the 24-hour fusion challenge but mostly talk about the couple having babies. Or like Charlie and Sharna encoring their Mary Poppins dance, perhaps in part so that Charlie could redeem himself for dropping the cane last time—only to have the umbrella break in his hand!

A standout for me tonight is our wonderful, ridiculously funny host, Tom Bergeron. He’s on fire tonight, with lots of occasions to get some good zingers in there.

There are a few new performances too, with the 24-hour fusion challenge; the contestants’ last dance on the show. It’s very sweet to see them say goodbye, to their partners, to the whole experience, even to the studio. And these dances, all three, are great fun, with cool mixes of dance styles.

Amy and Derek dance a really cool Argentine tango and cha-cha fusion, and Amy is still as amazing as ever. This routine has great choreography and awesome music. She seems just a little nervous, and I think that accident reel turned out to be foreshadowing because there’s a moment when I think she accidentally hits Derek in the leg. But it’s a very exciting routine and a fitting final dance.

Candace and Mark dance a quickstep/samba fusion to Stevie Wonder’s “Sir Duke.” More like slowstep, I’m sorry to say, because the music is definitely too slow. It’s much more difficult to keep control and timing when the music is slow, especially with a dance that’s so hoppy, and especially for someone who gets nervous and insecure the way Candace does. But she mostly kept her timing, and she definitely enjoyed herself.

Meryl and Maks’s brilliant fox-trot/tango fusion is effortless and beautiful, from that first clean, sharp move to that gorgeous final bow. I really appreciate and admire that Maks choreographed a reverence into the routine. They threw in a lovely Argentine tango basic too, and the costume is gorgeous: beautiful color, great tear-away skirt revealing awesome fringes and Meryl’s incredibly sculpted legs. Wow. Except, I think she actually made one tiny mistake! Is that possible? Meryl make a mistake? Good to know she is human after all. But of course, what makes someone a professional is not that they don’t make mistakes, but that they recover quickly from them, and Meryl certainly did that.

And of course, the big news of the evening is the announcement of the winner. Candace’s supportive fans are not strong enough to carry her past third place, fortunately, so it comes down to Amy and Meryl—though it’s more of a competition between Derek, who’s already won the mirror ball trophy five times, more than any other pro, and Maks, who’s been in the finale before but has never won in his 14 seasons on the show.

Well, finally, Maks has his night, with probably the best partner he’s ever had. Yes, ladies and gentlemen, Maks and Meryl are your new season 18 “Dancing with the Stars” champions!

So, dance fans, thank you for joining me for another season of recaps. I hope you enjoyed them as much as I did. What do you think? Are you happy with these results? Did the best woman win? Which are your favorite routines, from tonight or from the season? Do you think Len Goodman really won’t be back for another season? Chime in below.