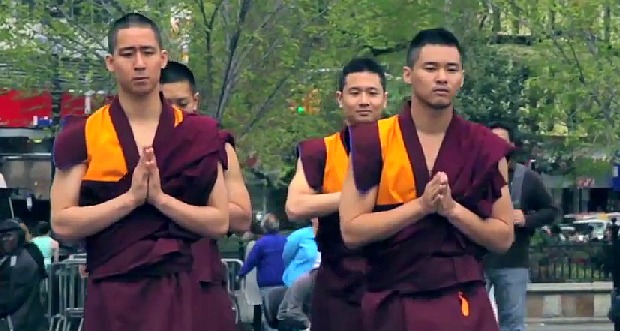 Buddhist monks (or at least men dressed like them) honored MCA (Adam Yauch) of the Beastie Boys this past weekend for MCA Day in the most amazing and best way possible.

Yauch, a practicing Buddhist since 1994, was vocal in his Buddhist beliefs and had organized several concerts benefiting the Tibetan Independence Movement, most notably the Tibetan Freedom Concert. Yauch died on May 4, 2012 after a long battle with salivary gland cancer.

In honor of Yauch, the four men (Franklin Chen, Jason Ng, Stephen Pyo and Erich Reyes), dressed in Tibetan monks’ robes, took to Union Square and showed off some skills probably not honed in a monastery.

It’s unclear if they were all actually Buddhist monks, but the spectacle was a sight to behold.