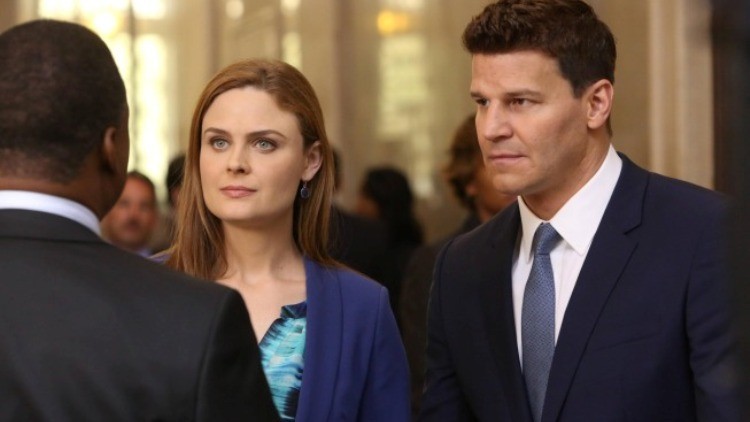 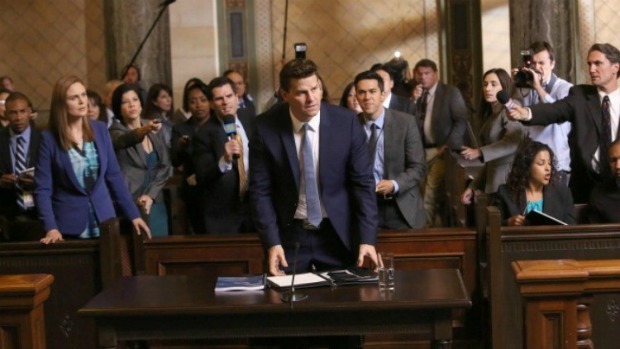 Can you believe it’s a wrap for season 9 of “Bones“? I can’t! I also can’t believe the way this finale ended. Show-runner Hart Hanson and Producer Stephan Nathan weren’t kidding when they said this will change everything for the future of Booth and Brennan – and everyone else for matter.

I liked how the episode started, with Booth being frantically wheeled into an emergency room with multiple gun shot wounds and Brennan close behind, very distraught – then cut to two days earlier.

Booth at the kitchen counter studying for his testimony in front of the Congressional Sub-Committee and Brennan speaking German (of course she can) to him to help him practice for his eminent transfer to Germany – she never ceases to amaze me! Booth gets an anonymous call from someone who has information about the McNamaras and their connection with the FBI. He wants to meet Booth, while Bones worries about him going.

Well, of course that wasn’t going to happen – the guy’s body is found blown up with not much left of him. The team finds some odd evidence at the scene. Someone filled his body with vodka and blew him up. That was the first guess, but later, Brennan realizes the guy was tortured first. Someone knew he had top secret information about the FBI and didn’t want him sharing it with Booth. (The crime scene had a dark/eerie feeling to it – didn’t you think so?)

At the lab, Mr. Fisher (yes, he’s back – I’ve grown to really like his character) concludes that the victim is Wesley Foster, a conspiracy blogger. Angie goes to do her magic and collect information on him. He was a journalist at The Chronicle, but lost his job and wife, and became a conspiracy blogger (of course I thought Hodgins would dive right into that – Mr. Conspiracy himself.)

Booth gets very stressed about the case and tells Sweets not to tell anyone they are working on it. The Deputy Director (Stark) tells Booth he doesn’t want the case (although he doesn’t know what it’s about) to interfere with him testifying. Booth tells him it won’t, but seems agitated. He was clearly concerned about what Mr. Foster was going to tell him.

Angela finds out the hard drive was removed from Foster’s computer; not at all shocking to Hodgins. Of course “they” removed it. Cam wanted to know who “they” were, and Hodgins tells her: “They are the ones that poison our environment, they are the ones who start wars to protect corporate profit, they give themselves raises on the backs of…” Okay Cam, do you get who “they” are now? LOL – the government.

Hodgins does tell them (the quints and Cam) that Wesley would have the information stored/hidden somewhere  – and he was right. It was in his nipple (a memory chip). Clever!

Brennan starts to worry and tells Booth to ask DD Stark for help with the case. Booth says NO. They find out Foster’s last job was a night janitor at a security company that was owned (holding co.) by the McNamara’s. The company held security for very confidential records. Wesley accessed Top Secret information that the FBI was willing to do anything to keep a secret – including kill civilians and their own agents.

Booth, Sweets and Caroline can’t get clearance to open the files they need. The case gets more intense at this stage and it felt different than any other episode this season – which I liked. More on that later.

Booth is still adamant about not letting Stark know their suspicions about the FBI and McNamara’s. He knows people above him are in on it. I wasn’t sure at this point if Stark was or not. What did you think?

Booth, Stark and Congressman Hadley have lunch. Booth needs to leave in the middle of it — which I think lead Stark to realize something was up with the case.

Angela downloaded major information and photos from the chip. There was a photo Booth had taken of a girl “shooting up” that he had been told was just a routine – but it was a Senator’s daughter. All of this information they recovered was major blackmail material, and I mean major!  The records told of financial improprieties by businessmen, foreign ambassadors. Caroline said somebody needed to talk! But that wasn’t going to happen!

They deduct that McNamara was being blackmailed too. This case was big, REALLY BIG. Someone in the FBI was in control and had control of many big wigs — including foreign officials, congressmen, businessmen, you name it. Booth was getting too close and that’s why they planned on shipping him to Berlin. Oh boy – more and more intense. Sweets really wants them to go public, but Booth says no way.

I don’t know how they could ever tell this, but with further examination of the bones, a take down strangle-hold used by Delta Force Rangers was used on Wesley.

Things really escalate! Booth and Brennan get into it at home. He wants her to issue a statement saying the death was accidental, so that the FBI would back off. She didn’t want to – but did.

Booth testifies, and it seems to be going fine – until Congressman Hadley blindsides him. “What is your relationship to Daniel Johnson?” Booth tells him he cannot answer – it’s classified military information. Hadley goes for the kill, saying Booth assassinated a United States citizen. Booth tries to defend himself; Bones is very upset.

The hearing is now a sham. Someone realized Booth had too much information. Booth tells Bones he was a warning for anyone else getting too close to the case. Stark tells Booth he believes him, but has to put him on administration leave – meaning he will be fired. What the heck is going on?! 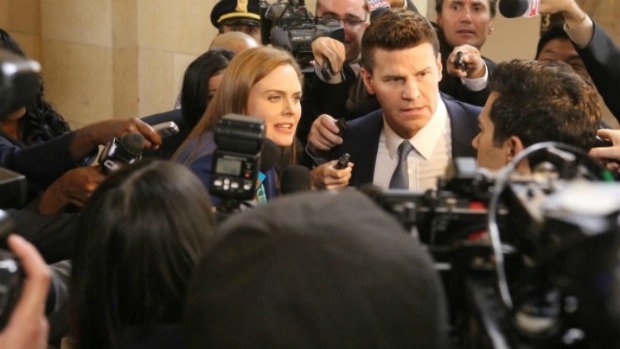 Everyone at the lab comes together to try and figure out what’s going on. Angela finds out why Hadley turned on Booth; he was being blackmailed. Booth finally decides he has to end it all. He sets up Hadley to squeal on him, which he does.

At home, Booth tells Brennan to get Christine and go to her dad’s. He sets up the house with major weapons and explosives (seriously – call some of your old military buddies, I know they would have come to help.) Brennan is furious and very afraid for him. They have a big argument and he forces her to leave. “I hate you for telling me to walk away.” She turns and he calls out to her: “Bones, I love you.” She comes back and tells him not to die. They have a good kiss (finally) and she leaves.

Enter Delta Forces! It was a crazy and explosive shoot-out! Slowly, Booth takes two out.

I was sad about the house getting shot up – they haven’t had it that long!  That really means something new is coning next season. Hum.

Brennan returns to the house with information about one of the Rangers being left handed. Booth is shot and Brennan goes into action. She shoots one. He comes back at her with a knife. Her gun is empty, so she tries to fight him, but gets knocked down. Booth trips him and then breaks his neck. Don’t mess with his woman! Booth collapses.

She panics when she sees how bad Booth is injured and yells, “Don’t you die – don’t you die!”

Return to the hospital, where they’re working on Booth. Brennan is very scared. While in the waiting room, the gang shows up. Time elapses and finally the doctor comes out to tell her he’s going to be okay … but that there’s something else. I was trying to think to myself what that “something else” was going to be? Is he blind? Did he lose an arm? What?

She storms past and sees that Booth is handcuffed to the bed. What the…? Three FBI/CIA (whatever) bodyguards watch him. She demands they release him, and – I should have known – in comes Deputy Director Stark saying that Booth killed three agents! Chaos ensues, and they take Bones away to detain and question her!

What did you think, “Bones” fans? The Delta Forces in their house was a little crazy, but it made for good drama. The ending was good, because now we have no idea what direction they will have Booth go next season. Is there any chance once this case is figured out he could go back to the FBI? Would he want to? Could he start his own investigative company? What do you see happening?