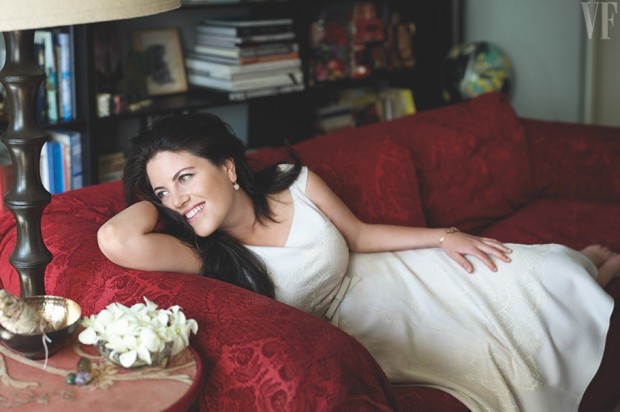 The Interwebs have been on fire this week with a Vanity Fair story in which Monica Lewinsky writes for the first time about her affair with President Clinton. “It’s time to burn the beret and bury the blue dress,” she writes. “I, myself, deeply regret what happened between me and President Clinton. Let me say it again: I. Myself. Deeply. Regret. What. Happened.”

Personally, I think she’s been treated unfairly by the press. I was chatting with Reel Life With Jane writer Paula Schwartz about it, and totally agree with her thoughts that Lewinsky, who’s now 40, suffered “a gross and unjust disparity in the way she was treated by society and the media, and her article in VF shows she has real attitude and moxie and you can’t help but admire that.”

Paula notes, “The fact is, that while Clinton has been largely rehabilitated and is as popular as ever, she got the huge Scarlet A stamped on her forehead and had her life derailed, which speaks to a medieval attitude towards adultery that always works in a man’s favor in this society.” Yes! Couldn’t agree more. I really hope Lewinsky has a major comeback and is able to erase that Scarlet letter and move forward in a meaningful way.

The full story is online in Vanity Fair’s digital edition, although it does require a subscription. Here are seven things we learned from the story.

1. The Clintons didn’t pay Lewinsky to keep silent for the past ten years. “I can assure you that nothing could be further from the truth,” she writes. “I am determined to have a different ending to my story. I’ve decided, finally, to stick my head above the parapet so that I can take back my narrative and give a purpose to my past. What this will cost me, I will soon find out.”

2. The affair was between two consenting adults. “Sure, my boss took advantage of me, but I will always remain firm on this point: it was a consensual relationship. Any ‘abuse’ came in the aftermath, when I was made a scapegoat in order to protect his powerful position … The Clinton administration, the special prosecutor’s minions, the political operatives on both sides of the aisle, and the media were able to brand me. And that brand stuck, in part because it was imbued with power.”

3. It’s been tough trying to find a job. After the scandal, she writes, “I turned down offers that would have earned me more than $10 million, because they didn’t feel like the right thing to do.” Instead, she earned her master’s degree in social psychology at the London School of Economics, and interviewed for numerous jobs in communications and branding with an emphasis on charity campaigns. Still, “because of what potential employers so tactfully referred to as my ‘history,’ I was never ‘quite right’ for the position. In some cases, I was right for all the wrong reasons, as in ‘Of course, your job would require you to attend our events.’ And, of course, these would be events at which press would be in attendance.”

4. She’d like to correct the lyrics in Beyoncé’s new tune “Partition.” “Thanks, Beyoncé, but if we’re verbing, I think you meant ‘Bill Clinton’d all on my gown,’ not ‘Monica Lewinsky’d.'”

5. Ironically, she felt lucky about Hillary Clinton referring to her as a “narcissistic loony toon” when corresponding with close friend Diane Blair. “If that’s the worst thing she said, I should be so lucky. Mrs. Clinton, I read, had supposedly confided to Blair that, in part, she blamed herself for her husband’s affair (by being emotionally neglectful) and seemed to forgive him. Although she regarded Bill as having engaged in ‘gross inappropriate behavior,’ the affair was, nonetheless, ‘consensual (was not a power relationship).’”

6. It was heartbreakingly difficult for both Lewinsky and her mother when Tyler Clementi, the 18-year-old Rutgers freshman who was secretly streamed via Webcam kissing another man, committed suicide in September 2010. ” [My mother] was reliving 1998, when she wouldn’t let me out of her sight. She was replaying those weeks when she stayed by my bed, night after night, because I, too, was suicidal. The shame, the scorn, and the fear that had been thrown at her daughter left her afraid that I would take my own life—a fear that I would be literally humiliated to death.”

7. She wants to move forward in a meaningful way. Following Clementi’s tragedy, she writes, “my own suffering took on a different meaning. Perhaps by sharing my story, I reasoned, I might be able to help others in their darkest moments of humiliation. The question became: How do I find and give a purpose to my past?” When news of her affair with Clinton broke in 1998, she was possibly the first person whose global humiliation was driven by the Internet. That’s why her current goal is to “get involved with efforts on behalf of victims of online humiliation and harassment and to start speaking on this topic in public forums.”

All I can say is, I am with you one hundred percent, Monica, and look forward to seeing where you go from here.