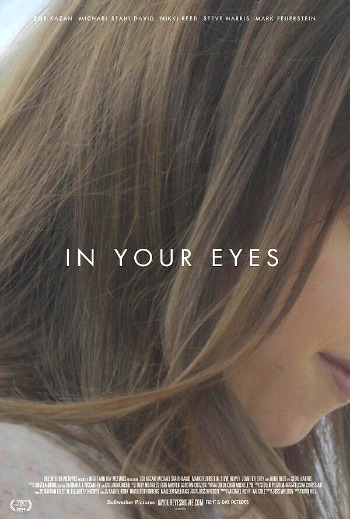 Following the world premiere of Joss Whedon’s written and exec produced “In Your Eyes” at Tribeca Film Festival this week, the romantic indie was immediately released on Vimeo and their website.

Ushering in this new brave world of distribution we’re in today, Whedon can be sure “Avengers” will do just fine in a wide theatrical release, but something smaller would never survive. Hence the choice to take the Brin Hill-directed indie pic starring Zoe Kazan and Michael Stahl-David to a smaller screen in hopes of a bigger pay day – or at the very least, an appreciative audience.

“In Your Eyes” adheres to Whedon’s supernatural tendencies and makes an inexplicable premise the center of its plot, played out by two characters spread across the country from each other – ex-con Dylan (Stahl-David), attempting to be good in New Mexico, and the bored doctor’s wife Rebecca (Kazan), attempting to be good in a whole different way for her stuffy friends and husband (Mark Feuerstein).

But the pair has something unique – the ability to see the world through each other’s eyes. This has gone on since childhood for the two, but one day as adults, it happens more clearly than ever and they’re able to talk to one another. Thus ensuing a sort of long-distance courtship that you end up ultimately rooting for because, well, who doesn’t want that kind of love?

“Joss is really smart about how he handles the magic in this movie,” says Stahl-David. “He sets it up pretty quickly and then answers this really important question very early on, when Rebecca explains how she can cut him out [of her head]. I’ve been meditating a lot this year and thinking about letting in other energies. And I’m not a religious person, but I’ve been thinking about people who pray a lot and how there’s this certain amount of focus that brings in another [dimension]. So when she says she can tune Dylan out when she has to, I can relate to that.”

If you’re willing to suspend belief for 90 minutes (which is what we go to movies for, isn’t it?), you will relate to it too. With Whedon’s comedic lines and the actors’ timing, along with a tough editing job done really well, the light romantic fare is attempting to get at something deeper. Something Kazan has seen before from Whedon.

“I think that all of Joss’s supernatural writing is a way at getting really human problems,” she says. “Like ‘Buffy the Vampire Slayer’ is about puberty and people’s bodies becoming strange to themselves and how to deal with this scary adult world. There is something similar in this film. I think he’s using the supernatural element to talk about connection and about self-love – discovering a new part of your self.”

The challenge of filming this love story, though, was not being on screen with each other. Since Rebecca and Dylan don’t meet in person until the last scenes of the film, spending their time falling in love over lengthy phone conversations minus the phone, they had to be there for each other off-screen, hidden, reading their lines for one another.

“The time I found it really hard was the scene at the gala when I go into the bathroom [by myself] and have an argument with Dylan [into the mirror],” recalls Kazan. “We shot that scene at the end of a really long day, and I just couldn’t look at myself. Acting into a mirror is really hard. When we ‘meet’ for the first time and we have to look into a mirror at ourselves, that was a playable moment and really nice, but fighting with someone/yourself in the mirror where they’re slapping themselves and you’re feeling it, it was really difficult. Every time I made full eye contact with myself I’d just stop. I was like, well, I don’t’ fucking believe myself!”

Adds Stahl-David: “I used to do that when I was preparing for auditions. I’d ask myself, ‘Do I believe this?’ And the answer was always ‘No!'”

To order “In Your Eyes” for $5, visit inyoureyesmovie.com or vimeo.com. Click the images below for larger views and sharing options.