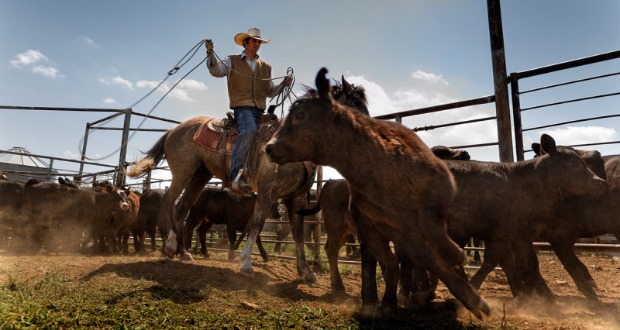 The new documentary, “Farmland,” had its premiere at the Tribeca Film Festival on April 17, 2014, followed by a Q&A with director James Moll and a musical performance by Liz Phair and Everclear. The film follows six ranchers and family farmers who are in their 20’s, showing what their lives are like and breaking through a lot of stereotypes in the process.

In the hands of Moll, who is an Oscar, Emmy, and Grammy-winning pro, the portrait of the farmers, who are in various parts of the country, is compelling and entertaining. I also enjoyed the score by Nathan Wang with the City of Prague Philharmonic Orchestra.

Several of the farmers in the film attended the premiere. I asked Ryan Veldhuizen, a fourth generation hog farmer in Minnesota, what it was like attending a film festival in New York, and he said, “Well, it isn’t what I normally do.” Then, he quipped, “It’s the first non-ag audience I’ve ever had.”

During the Q&A, Moll said, “I want everyone who eats to see this movie.” He grew up in Los Angeles and had never been on a farm before beginning his work on “Farmland.”

Rather than go down the path of focusing on any one of the many issues faced by today’s farmers, Moll said, “I wanted to make a character movie. I wanted to know who the farmers are.”

Liz Phair and Everclear collaborated on a new version of “This Land is Your Land” for the film’s closing credits. After Everclear performed four of its own songs at the premiere, Phair joined them for a live performance of the Woody Guthrie anthem.

“Farmland” already has distribution and will be released in 60 major markets on May 1, 2014.