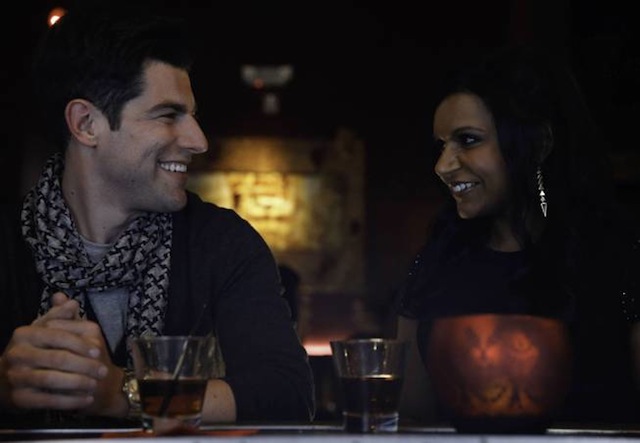 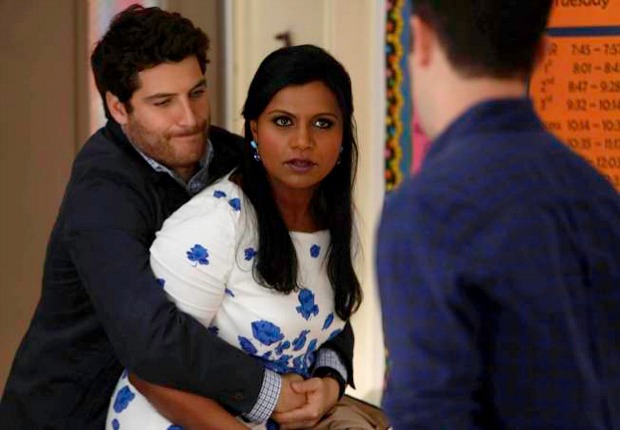 Well, Mindy fans, it’s still true. It’s a new “The Mindy Project,” and Danny and Mindy are truly over. At least for now. In fact, Mindy doesn’t even want to talk to Danny.

They’re both heartbroken, especially Mindy, and though Danny’s clearly pretty sad too, he’s not as willing to admit it. Then again, he said last week that he doesn’t have any friends, so who would he admit it to? He spends the episode in search of human contact, particularly the kind of interaction Mindy provides: he wants to gossip, talk about problems, and give advice. Clearly Mindy’s changed him, because he didn’t do this before.

He tries talking to Mindy, especially when he finds her lying on her office floor, but she makes an excuse about a sore back (because she’s so tall). But she clearly does have drama to discuss—just not with Danny. I can’t completely blame her, since he broke up with her in a misguided attempt at saving their friendship. Also, why would she want to talk with him about her issues with dating other men?

Mindy tells Peter about her disastrous new relationship (how did it become a relationship? I thought it was only one date) with a friend of Betsy’s whom she can’t break up with because she doesn’t want to be mean. Peter points out that she’s resisting breaking up with this guy, not because she’s too nice, but because she thinks she can’t do better, since she’s clearly not good enough for Danny. It’s so sad that she thinks this; Danny is the one with the problem.

Peter suggests that she think more like him and date everyone. They go to a bar where she meets Lee, played by “New Girl‘s” Schmidt, Max Greenfield. Boy, he is pretty cute when he’s not being a complete douchebag (money in the jar please, Schmidt); i.e.: during their meet-cute. He’s smiling gently and flirting, but not coming on too strong.

Problem is that he turns out to be a jerk, natch. Mindy ignores Peter’s text advice telling her to take it slowly, and she ends up having a one-night stand with Lee. She thinks he’s still interested in her because he accidentally leaves his scarf at her apartment, a classic Cinderella move, but when she tracks him down at the school where he teaches first grade, she finds out not only that he’s not interested in seeing her again, but that he’s married. Classic douchebag move.

Fortunately, Peter’s self-growth continues, as he realizes that he’s also been a jerk because he does the same kinds of things to other women that Lee did to Mindy. His epiphany: instead of telling Mindy to think more like him, he should be more of a romantic, like her. It’s so funny how he can be so insightful about some things and so blind about others.

Meanwhile, Danny tries to help Morgan and Tamra with their relationship problems—after he walks in on them making out in the pantry! Whoa! The image of Morgan in his underwear burns my eyes like a bright flash bulb, which unfortunately is not going to go away any time soon.

So Morgan and Tamra are getting … something going, but she’s still involved with Ray Ron (which is apparently short for Reagan Ronald). I’d like to have seen that plot line develop a little more. Man, things move fast on this show. Anyway, Danny, who’s desperately trying to convince everyone— including himself—that office relationships don’t work, convinces Tamra to stay with Ray Ron, even though she wants to be with Morgan. Morgan tries to come clean with Ray Ron about his involvement with Tamra, and learns that Danny sabotaged his happiness. Needless to say he’s not too pleased about that (we’ll see if he remembers next week).

What’s more, poor lonely Danny with no one else to talk to decides to call Sally (remember her? Peter’s sister, whom we met last week?) for a date. I’m not sure if Peter still prefers that he not date his sister—not that it’s his decision, but things could get even more awkward around that doctor’s office. Especially when we learn that Sally is doing that Cinderella move that even Mindy called crazy: leaving her earrings at Danny’s place. That final reveal felt like something out of a horror movie. Her earrings may as well have been body-snatcher pods.

Here are some classic lines from tonight’s episode:

“We’re spending next weekend in Vermont looking at the foliage. Phil says that it’s cheaper off season.”—Mindy

Danny: “Anyone have anything dramatic that happened to them that they want to talk about?”
Betsy: “Yes, I killed a spider.”
Beverly: “Wait, I brought a spider.”

“My kingdom for a gay husband.”—Mindy

“What can I say, I know how to ruin a relationship.”—Peter

“She has her legs crossed on a bar stool. Who does that? If I tried to do that I’d Humpty Dumpty right off of here.”—Mindy

“My mother was insane, so I’m kind of attracted to this. Not that I want to sleep with my mother.”—Lee

“Of course you know how to read, you just have that fun, Huckleberry Finn, I-don’t-know-how-to-read energy.”—Danny

Peter: “Am I a dick? Does everyone think I’m a dick?”
Mindy: “Yeah, are you just realizing that now?”

Peter: “Look I’m sorry, I owe you an apology, Mindy.”
Mindy: “For pantsing me in the cafeteria? Yeah, that was not cool.”
Peter: “No no no, that was classic.”

So what did you think, Mindy fans? Are you surprised to see Morgan and Tamra’s relationship progressed so far? How is Mindy at playing the field? How long do you think Sally will be clinging on to Danny (and boy did she look clingy)? Chime in below.