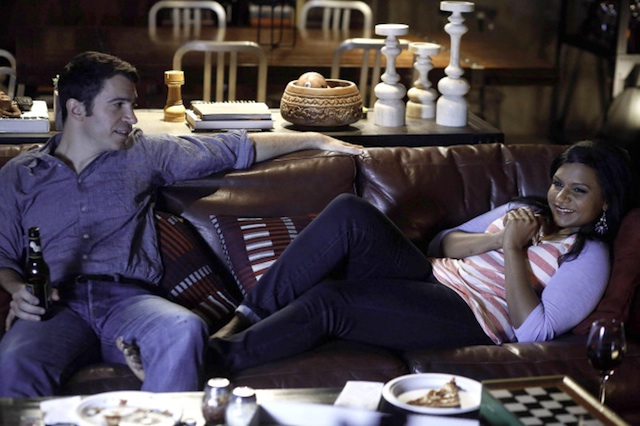 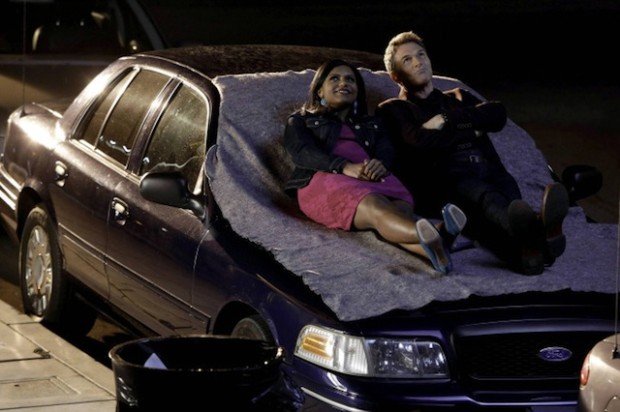 Is it just me, Mindy fans, or did anyone else find this episode of “The Mindy Project” very odd? I still laughed, almost in spite of myself, but it was frustrating and strange … and sad.

After a bizarre cold open involving elective surgery, an apparently neglectful nurse (why would she let Mindy leave?), and too many painkillers, we’re reminded of the handsome cop, Charlie, who Mindy met last week. He makes her realize that she’s too reliant on men, so she decides to become more self-sufficient by buying an apartment, rather than renting one. (Whatever. It’s just another excuse to get her into the needed situation).

Danny insists on helping Mindy apartment hunt, which turns out to be good, because she’s about to make an offer on a terrible apartment in the up-and-coming “Little Chernobyl” neighborhood. Danny stops her by showing her a different apartment that is perfect and in her price range. Problem is, it’s in Danny’s building. Next door to his apartment. And he owns it.

She’s concerned it’ll be weird for her to live next door to him, which of course it is, but he insists that they’re friends now so it’ll be fine. They even get along great, sharing some very sweet moments together, not noticing that Danny’s overstepping his boundaries and making assumptions about their spending time together.

Mindy’s fine with it, until Peter points that Danny is trying to keep tabs on Mindy. (Danny isn’t exactly keeping tabs on Mindy, but he may be trying to get close to her again, whether admitting it to himself or not. What a big scaredy cat.) She tries to convince Peter (and probably herself) that’s not what it’s about, and that neither would be mad if the other brought home a date. She decides to test whether she and Danny could remain friends while dating other people by calling Charlie and inviting him over for dinner—though I also suspect she wants to be the first to start dating.

Speaking of dating, Peter gets a taste of what a real, adult relationship could be like when he goes out with a friend of Jeremy’s who is a brain surgeon. And a single mom. And totally out of Peter’s league. Despite having fun on their date, she tells Jeremy she doesn’t want to see Peter anymore because she finds him too immature. But now that Peter’s seen the other side, he wants more. He convinces her to give him one more chance.

When Danny sees Charlie’s shoes outside Mindy’s door (do people really do that in real life?), he gets jealous, and apparently waits in the hallway for an excuse to interrupt them. Fortunately for him, her attempt to show Charlie how self-sufficient she is backfires when dinner catches fire and the alarm goes off. (Boy, they really make Mindy look stupid in this episode. She’s a doctor, for Pete’s sake.)

Danny and Charlie start comparing life experiences, and probably realize what I pointed out last week: they are much too similar. Worse than that, they’re trying to outdo one another. They’re both from Staten Island, with strong accents (Danny’s gets stronger as they talk), they both cook excellent sauce, they’re both handsome and successful, and of course interested in Mindy. They might as well just whip out a tape measure…

Danny’s about to invite them to his apartment to try his new microbrew, “Dr. Dan’s summertime snickerdoodle ale,” but doesn’t want to break up their date (so he says). When Mindy insists that her dinner with Charlie is not a date, Charlie decides to remove himself from the picture. I’m not sure why Charlie thinks Mindy is more interested in Danny at this point, especially since she had insisted to Charlie that it was not a date when she called him. She seemed a little annoyed with Danny, which is understandable, so why would Charlie think she’d want him to leave?

The next night, Mindy decides to try again with Charlie, while Danny tries again to get Mindy to come to his apartment (that is some weird kind of control thing, isn’t it?). Looking for any excuse, Danny asks to borrow some detergent from Mindy, and when she says she’s going on a date, he tries to kiss her again. This time Mindy turns him down, saying that he can’t just “feel like it” only when there’s another guy. Clearly, Danny needs to decide if he wants Mindy or not, and if not, he needs to let her go.

I feel so sad for Danny. He seems so afraid of what others will think, yet he frequently ends up in hugely embarrassing situations (like this one). So what’s the difference? But more to the point is Mindy’s excellent question: why does he only make a move when there’s someone else in the picture? Granted, we don’t see many times when there isn’t someone else, but presumably those times do exist. Danny seemed to realize last week that he’s still in love with Mindy, so what’s he waiting for (other than the finale)?

I confess, I too feel like I’m waiting for the finale. Not because I want the show to end, but because this feels a little like filler. They keep trying to find excuses to get them closer together while keeping them apart. And yes, that’s what screen romances are like, especially on television (a potentially infinite number of episodes with ideally no end in sight), but considering where they were a few episodes ago, it seems a bit like they’re treading water until the finale.

Which happens to be next week.

But first, of course, my favorite lines this week:

“I’m not drunk officer, I’m under the influence of drugs, so the joke is on you, this time.”—Mindy

“You make men do your chores? Look I’m no feminist, but I printed out enough Jezebel articles to give to my daughter to know that’s not cool.”—Charlie

“Well, there are certain things that a woman should never have to do. Like fix a toilet. Or vote.”—Mindy

“Danny, you know my plan in an emergency is just to count to 10 and wait for death’s embrace.”—Mindy

“You’ll find plenty of people who’ll read your horoscope to you against your will.”—Mindy

“I’m so excited. What should I bring? I can’t afford normal wine.”—Morgan, about Peter’s date with Lauren

“A doctor told me that my metabolism is so high that I basically have to eat every hour. And that doctor is me.”—Mindy

Charlie: “Are you into astronomy?”
Mindy: “I think I am, you know, cause I’m very into astrology, and one time someone thought I looked like that black lady from the old Star Trek, so…”—Mindy

“My date with Lauren was amazing. You know, it’s making me rethink that whole book learning for women thing.”—Peter

“You’re a little nut job. I like that, it’s interesting.”—Charlie, to Mindy

So what do you think, “Mindy” fans? Are you ready for the ultimate rekindling of the Mindy-Danny relationship? What do you think the big finale twist will be? Are you sad that the season’s almost over? What were your favorite lines tonight? Share your thoughts below.