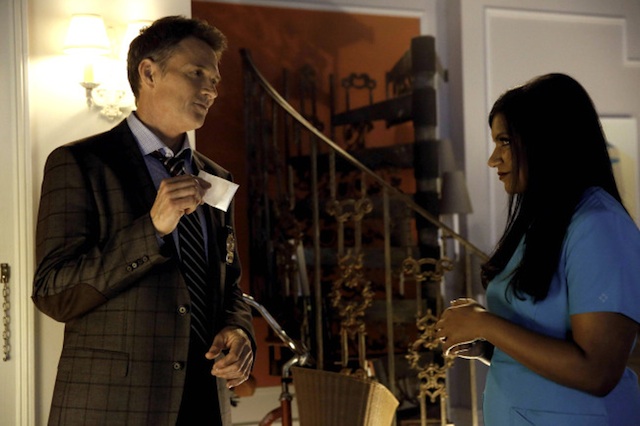 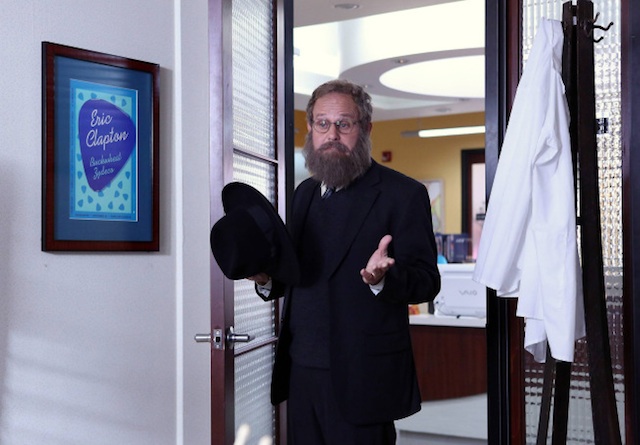 So, “Mindy” fans, am I the only one experiencing a little déjà vu? It seems we’ve come full circle with this week’s “The Mindy Project,” as I suspected. As if we hadn’t backtracked enough by splitting up Danny and Mindy and resetting them to earlier in the season, they’re now heading down the same clichéd rom-com path they went down before.

Don’t get me wrong, this episode is still hysterically funny, and I’m glad they’re heading back into the potential romance. I actually feel clichés are almost a necessary evil (to a degree), especially when it comes to romantic comedies. But “The Mindy Project” is so brilliant at taking situational clichés and turning them on their heads. It’s just the plot clichés here that are the same, and don’t seem necessary. They didn’t need to reset and rehash them so quickly.

So, Danny is still in a relationship with Peter’s sister Sally, despite the very obvious age difference between them (she thinks Danny’s complaining is him playing an “old man” character). I’m surprised Danny’s still with Sally, as I’d think he’d want to take some time off too.

Mindy, on the other hand, reflects back on all her failed relationships during the course of the show (“from the tall and white to the short and white”), and decides to take a break from men. She puts pictures of all her exes, including Danny, into a “heartbreak box.”

Of course, leave it to swearing off men to summon a handsome stranger: in this case, Mindy’s patient’s father, Charlie Lang (played by a grizzled Tim Daly), a hard-nosed detective who wants to protect his daughter, Jenny (and looks and sounds too much like Danny). When Mindy provides Jenny with birth control pills, he goes ballistic and yells at her. Welcome, new (temporary) Mr. Darcy.

By the way, I’d love for them to come up with some different names: most of the names on the show end in an e sound: Mindy, Danny, Sally, Jenny, Charlie, Jeremy, Betsy, Beverly. The only exceptions are Peter, Morgan, and Tamra (oh, and Lawyer Cliff).

While riding the subway with Sally, Danny befriends Rabbi David Alder (played brilliantly by Peter MacNicol) when he rescues him from some bullies. Seeing the name Shulman and Associates on Danny’s bag, the rabbi assumes Danny is Dr. Shulman—a good Jewish boy. Before Danny can correct the misunderstanding, Rabbi Adler mentions the prospect of thousands of patient referrals, so Danny goes along with it.

I’m starting to hate that ploy. One person assumes something is true, and then doesn’t let the other person speak long enough to correct the mistake. It’s pretty rude behavior, frankly, and the device is getting overdone. Of course, without it, there’d be no secondary plot for this episode.

Rabbi Adler invites Danny to Shabbos dinner with his family, and Danny brings Peter—apparently the resident Jew—with him in case he makes any goyish mistakes. Peter’s charming them all, until they learn that he’s not circumcised. Apparently Peter’s just not that Jewish. (That strikes me as one of those rules you’d want to follow, regardless of how many others you decide to ignore.)

Meanwhile, Mindy comes home to find Jenny waiting at her door, hoping to get out from under her dad’s control. Mindy lets Jenny stay with her a while, and allows her to invite “a few friends” over—which of course turns out to be a sex party. Even Morgan (who Jenny has a crush on) is there, handcuffed to Jenny’s bed.

Jenny’s dad clears out the party and takes Jenny home, but not before allowing Mindy to give her a little talk. Jenny mistakes Mindy’s heartbreak box for a box of conquests, and Mindy explains the importance of making good decisions, without letting guys get in the way of that.

Back at Shabbos dinner, Peter again plays the voice of reason, pointing out to Danny that he’s lying to himself about Sally and that he really wants to be with Mindy. (I guess it’s just easier to see faults in others than in yourself). Danny hears it but doesn’t believe him, until he sees the Rabbi on the subway again, this time while he’s with Mindy. Rabbi Adler sees the love Danny has for Mindy (who he thinks is Sally), and tells him to follow it, since they’re clearly meant to be together.

Well, we knew that! So we’ve come full circle: Danny realizes that he loves Mindy and decides to break up with Sally, while Mindy decides she’s now interested in the cop—especially after he flirts with her, sort of, in his bizarre, sexist way (in front of Kathleen Kelly’s Pub, btw): by writing her a ticket for jaywalking.

Haven’t we done this before? Yes, I love the two wonderful moments between the couple in this episode: one in the office break room where Danny tries to cheer up Mindy, and the other on the subway when Mindy gets tangled up in her earbuds (does Mindy always need that much help, or is it just timing?). These moments remind us how wonderful their friendship is, even without romance, while showing hints of their deeper feelings for each other. But I’m sure Danny and Mindy will reconnect by the finale, which makes this whole breakup even more like a writers’ ploy to draw out the tension.

But it’s still a hysterically funny episode, as evidenced by my favorite lines:

Detective Lang: “I could get you on the no-fly list like that.”
Mindy: “Joke’s on you ’cause I’m already on it!”

“This feels inappropriate even to me, and I have no sense of boundaries.”—Mindy

“My apartment is not a place for sensuality, it’s a place for repressed sexuality, It’s a place where you order Chinese food, you cuddle, and you fall asleep, too full to have sex.”—Mindy

“Danny, there is a civil war general who is pointing and waving at you.”—Mindy

“My family will be telling the story of the lying goy and the Jew with the baggy schmeckle for as long as I’m alive.”—Rabbi Adler

Mindy: “Why do you think I’m swearing off men?”
Jenny: “Because you slept with all of them?”

So what did you think, “Mindy” fans? Will Danny and Mindy reconnect by the finale? Do you also find they’ve gone in circles, or are you enjoying the ride too much to care? Chime in below.