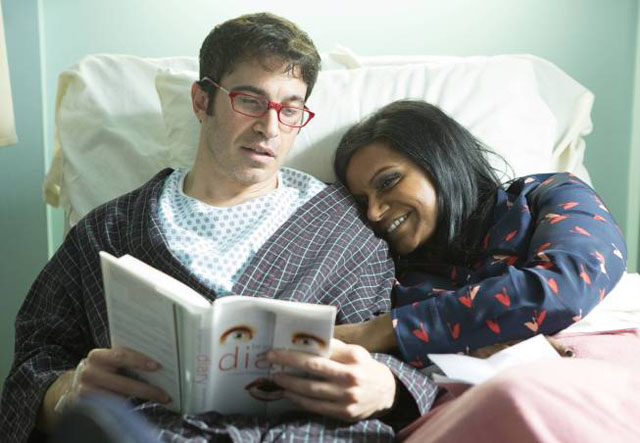 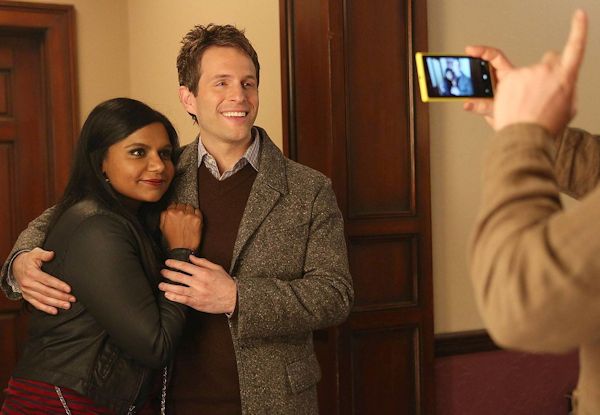 Hooray! “The Mindy Project” is back, and better than ever! And with a bonus episode, as if making up for the three months that have passed since we last saw our favorite romantic gynecologists.

The first new episode, “French Me, You Idiot,” picks up exactly where the last episode left off—thank goodness! I was afraid they would try to pretend that nothing happened—with Danny kissing Mindy at the back of the plane (where there are no flight attendants or other people, btw). He realizes she may not feel the same way, so he says he’ll count to three and if she doesn’t kiss him, then he knows it was a mistake. He gets to four before she reciprocates.

Then, in classic Mindy style, they take a typically romantic moment (or what seems like it should be) and make it disastrous. As Mindy and Danny immediately try to join the Mile High Club (I totally called it!), things go horribly, hysterically awry. To be frank, I’ve never had much desire to try that either. It really doesn’t seem that comfortable.

When they return to Mindy’s apartment, Cliff and Morgan are waiting for her with a mariachi band playing a somewhat bizarre rendition of Peter Gabriel’s In Your Eyes—part of Lawyer Cliff’s new plan to win Mindy back. I guess with the band in the way, Cliff and Morgan don’t notice how intimate Danny and Mindy are in the elevator—or they’re just not good at reading body language (which I totally buy of Morgan).

Of course, instead of telling Cliff the truth, that he blew it and Mindy’s now with Danny, Mindy feels badly for Cliff and delays the breakup, while Danny leaves, dejected. Mindy tries to break up with Cliff by saying that she’s in love with someone (not “someone else”) but he thinks she’s joking and referring to him. Odd, and he’s pretty clueless, but of course they can’t fix things that easily.

Before leaving, Cliff compliments Mindy’s writing, because her letter to him (ie: Danny’s letter) was so “surprisingly” eloquent; not riddled with misspellings or “full of pop culture references that no one understands.” Of course his saying this just proves how much he doesn’t get her.

Mindy takes the cowardly road: she tries to get Cliff to dump her, because historically it’s been easier for her to be dumped rather than do the dumping. But as she sets this plan in motion, Cliff learns that his grandmother has passed away and he is devastated (didn’t Morgan just mention grandmothers’ deaths in the last episode?). Apparently Cliff has a very deep, close relationship with his cruel, unforgiving, racist grandmother because she never missed one of his birthdays.

Of course, Mindy feels not only that she has to stay in a relationship with Cliff, but that she needs to spend the night with him to comfort him. Danny talks to Cliff to see for himself just how devastated Cliff is about his Gram’s death, and gets increasingly jealous as he learns more about the night. There’s nothing like a good bout of jealousy to improve a romantic comedy. I do appreciate him asking Cliff whether spending the night with Mindy aroused him. Yes, it’s awkward, and none of his business, but it’s important to him, so good for him for asking.

Based on Mindy’s beautiful way with words, Cliff asks her to write the eulogy for his Gram—which is, of course, ridiculous. Why would he possibly want someone else, especially someone who’s never met his grandmother, and of whom she would not approve, to write her eulogy? Then, why wouldn’t he read it ahead of time, before the funeral? It does make for some funny lines, such as Mindy not realizing that there’s anything wrong with the word “irregardless.”

When Cliff skips ahead to the part about being with a particular person, I wonder if Mindy started writing a letter to Cliff directly, because it no longer seems to be about his Gram. I also figured the fact that her eulogy is so terrible would give him a clue that perhaps Mindy didn’t write the original letter. I do love that Danny seems amused by the eulogy, rather than embarrassed or teasing her about it. In fact, it makes him want to be with her more.

It’s also interesting that Danny, the Catholic, asks God for a sign that they’re doing something wrong, but then they nearly set the church on fire while making out in the votive room.

Mindy finally feels she has to tell Cliff the truth, and he responds by punching Danny and essentially putting a curse on them. As Mindy and Danny finally share an intimate moment in her apartment, the bulb burns out with a flash and they think it’s the ghost of Gram.

Meanwhile, Jeremy learns that a competing ob-gyn has passed away, and he wants to make a bid for their clients, the fictional New York Metropolitan Ballet. They end up competing, again, with midwives Brendan and Duncan (who is apparently celebrating his 60th birthday soon), until Jeremy realizes he dated most of the women on the corps de ballet.

Peter and Brendan decide to join forces and it seems like it might work, until Peter reveals, quite vociferously, that he hates ballet. I confess that as a former dancer, I’m always a little offended when shows make fun of dance, though this one isn’t as bad as others I’ve seen. (Incidentally, none of the women on the video they watch were fouetteing.)

Mindy tells Peter her concern that the new man she’s seeing is going to find out about the video, so he helps Mindy go to great lengths to get it taken down (and keep it from Danny). This is made slightly easier by the fact that Danny ends up in the hospital with viral meningitis. (Mindy doesn’t seem to concern herself with this contagious disease until she’s also in the hospital, but we’ll just overlook that for now.)

Mindy meets Danny’s brother Richie again in the hospital—and meets Danny’s childhood friend Mr. Neck, much to Danny’s chagrin. Mindy’s disappointed when Danny introduces her as his colleague—apparently in Danny’s fever-addled brain their not sleeping together means they’re not dating—but Richie ends up being the first person to learn about their new relationship when Danny privately asks him for advice. It’s also hysterical how easy it is for Richie to get a rise out of Danny.

Peter and Mindy chase down Tom, who promises to deliver his copy of the video to Mindy, since he clearly can’t be trusted to destroy it. They also go to Sploderzz.com (ick), the website where Peter found it, and somehow convince them to take it down. It’s difficult because apparently there’s a real need for Indian BBWs: Big Beautiful Women. But the power of loyalty to one’s school is apparently very great, at least if you went to Dartmouth.

After Morgan delivers a bunch of Mindy’s mail to Danny at the hospital, Danny finds the copy of the video that Tom returned, and watches it. Peter and Mindy arrive there just in time to hear Danny yelling about the tape. Peter can’t understand why Danny is so upset about it—until he figures out that something is going on between them. When Mindy finally contracts Danny’s meningitis, it quickly confirms Peter’s suspicions.

Peter sweetly helps them both get back on track, pointing out to Danny how Mindy’s relationship with “the practice” is very different from her former relationship with Tom, and helping Danny understand why Mindy wants to take things slowly. Danny and Mindy share a very sweet moment reading “Bridget Jones’s Diary” together. I love that they have such a strong friendship, one that only makes their romantic relationship deeper. At least, we hope.

French Me, You Idiot:

“Yeah I wrote the crap out of that letter. Real romantic-like.”—Mindy

“I’m so catholic I don’t even trust this new pope.”—Danny

“I’m obviously the cultured one, plus I own a cape.”—Jeremy

“I’m sorry that I have to admit this, but I’m actually banned from Lincoln Center because apparently there is a three strikes policy for falling in the fountain there.”—Mindy

Jeremy: “You thought a pirouette was a type of cookie.”
Peter: “It is, and if you break it in half it’s also a breakfast cereal.”

“No person should ever have to bury a grandparent.”—Cliff

“I didn’t expect such a love of ballet from a man who burped so much in the waiting room.”—Ballet Mistress, to Peter
“It’ll be four hours of our most subtle work.”— Ballet Mistress

“Yeah, you’re very classy. Noted.”—Danny, to Mindy, when she tells him she doesn’t want to sleep with him yet.

“Rush things? We’ve been kissing for like 20 minutes. That’s like a week in guy minutes. Don’t I get credit for that?”—Danny

“Don’t beat yourself up, it’s a numbers game, and you’ve only called, like what, 25 girls.”—Mindy

“He came into his office this morning and he was all sweaty and cranky, so I was like ‘business as usual.’”—Peter

“Do I look like Morgan to you, cause people tell me that. I do not like it.”—Mindy

“You’re being pretty close-minded for a girl who just got her start in porn.”—Peter

“She’s no prude. I’ve seen her number on two different bathroom walls, in her own handwriting.”—Danny

“Are you kidding me? Look at these wrists! Look at how dainty they are! They can barely hold up the enormous calzones that I eat!”—Mindy

“Three hundo thundo, just to flash Vince and Owen?”—Mindy, pointing to her bosoms

So what do you think, Mindy fans? Was it worth the wait for these new episodes? Do you think Danny and Mindy’s budding romance will last? What were your favorite lines? Chime in below!