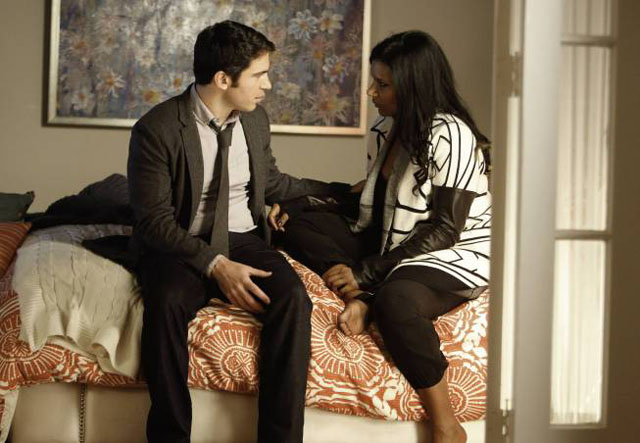 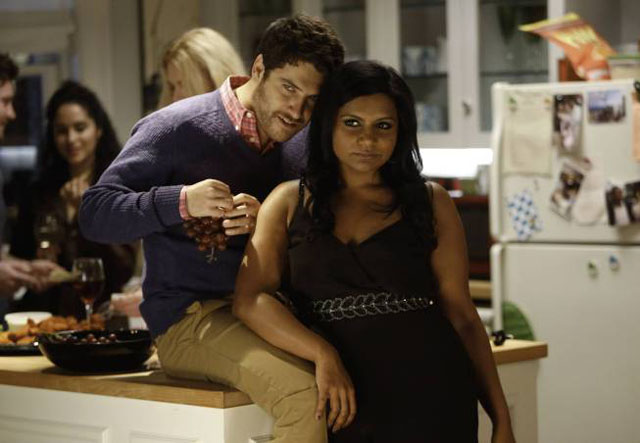 While we get another extra dose of “The Mindy Project” this week with two more back-to-back episodes, the end results disappoint. Yes, they’re still hysterically funny, with the trademark embarrassing debunking-romcom moments, the lightning fast, super subtle layered jokes, and broad slapstick. But the story again changes much too quickly and essentially resets back to before Mindy and Danny got together.

It looks like Danny and Mindy are already over. I felt so proud that the show decided to take a risk and make a go of their relationship, rather than trying to keep them separated. And then they go and do this.

Danny and Mindy have a few days of relationship bliss, enjoying each other’s company, and especially relishing the secrecy of their coupling. While Mindy would prefer to take it public, Danny is not comfortable with that yet and asks her to keep it private, despite the fact that Peter already knows. Even in situations where it would be beneficial to tell the truth, Danny instead lies in order to keep the facade of his strictly-business relationship with Mindy.

Things get messy when the pharmaceutical rep Brooke (Jenna Dewan-Tatum), who Danny apparently slept with at some point, comes back to the practice selling a new, and totally unnecessary, birth control pill. She hopes to hook up with Danny again, and is pitifully bad at reading his off-putting body language.

After Mindy realizes her apartment’s been burglarized, which takes a minute because she’s apparently such a slob, Morgan beats Danny to the punch and insists on moving in with Mindy indefinitely, bringing his puppy and appointing himself head of the household (and definitely overstays his welcome). While there, he finds a pair of men’s scrubs (presumably Danny’s) and a pen with Peter’s name on it, and suspects that Mindy and Peter are sleeping together.

When Morgan somehow overhears Danny asking Mindy if he’s staying at her apartment that night, Danny freaks out and invents a party at Mindy’s, instead of telling everyone the truth about them. Peter even tries to give Danny an out, telling Brooke that Danny has a girlfriend, but Danny chooses to lie to Brooke rather than reveal the truth to Jeremy. I love that triangle of disgust, as Peter tells Danny he’s disgusting while Jeremy thinks Peter is the revolting one.

Peter makes a misguided attempt—natch—to help Mindy by flirting with her to make Danny jealous, which simultaneously fuels Morgan’s suspicions that Peter is sleeping with Mindy. Of course it backfires, resulting in an intervention of sorts between Morgan and Jeremy and Mindy and Peter, but delivering a big laugh in the process.

Part of the (painful) brilliance of this show is that it goes that extra step to the most embarrassing place possible, and yet I don’t see it coming. How did I not expect that chair pratfall?

By the time Danny comes clean with Brooke, she brushes it off as yet another one of his failed relationships. He takes this to heart, and turns it into a self-fulfilling prophecy.

Danny’s a big scaredy cat. Yeah, Peter’s kinda gross and completely mistreats the women he dates, but at least he’s learning from the situation (he calls his current conquest and offers to take her to dinner … first). I actually feel badly for Peter now. I didn’t like him when he first came on the show, but he is the real heart and brains of this episode, and his misguided attempts to help Mindy and Danny have just dragged him further into the mud.

Danny is too afraid of what others will think or do—odd, considering the hugely embarrassing situations they all find themselves in. He tells Mindy she’s very important to him—so important that he’s afraid of losing her and breaks up with her instead, to save their friendship. It boils down to essentially the same excuse that Lawyer Cliff gave Mindy when they broke up: the assumption that they will eventually split up and that it’s better to do it now than later.

That may be true in television land, but I totally agree with Mindy when she asks, “Why did you even start this?” Everything has now been backtracked to earlier in the season, and the second episode just reset their dynamic.

While at the gym, Mindy meets the apparently famous (or infamous) Sheila Hamilton (“Breaking Bad’s” Anna Gunn), gynecologist to the stars, who expresses interest in Mindy’s work. Sheila complements her and begins courting her to join their practice. Mindy considers it, not just because of the exciting fame-factor, but because she’s now looking for an escape from Danny—thus proving how wrong he is about breaking up with her in order to keep her in his life.

Meanwhile, Jeremy tries to get their new mobile clinic running by offering free breast exams at a low-income Hispanic neighborhood in Harlem—apparently not considering how it might look for four strange men to give breast exams in a van, and only choosing to use his hidden talent for speaking Spanish when the situation is dire and Mindy is there to bail them out. Ridiculous.

Mindy turns down the offer from Sheila’s hoity toity practice because she’s loyal to her insurance-dependent clients, but when Jeremy and the boys get angry at her for considering the offer, she tries to go back and accept. She then discovers that Sheila’s practice was more interested in Mindy’s ethnicity and minority status than in her skills. She returns to the boys’ mobile clinic just in time to get them out of their scrape.

While these episodes are perhaps more sweet than funny (the first especially), there are still plenty of great lines:

“I know a guy who can disappear you.”—Morgan

“Friday is technically Mindy’s night off. I did try to switch her to Thursday, remember, but she wrote that Jezebel article about how I raped her weekend.”—Jeremy

“Gross. Bite your nails like an adult.”—Peter, to Danny after he chews on Peter’s pen

“They shared a Cornish handshake: [whispers] Sex.”—Jeremy, about Danny and Brooke

“What was the point of me choosing to live in a gay neighborhood if I can’t leave my door wide open? It’s not for the culture and the arts, and all the parades.”—Mindy

“Morgan knows my menstrual cycle, and I find it very helpful.”—Mindy (um, ew)

“You know how Mindy is with the velvet ropes, I mean, unless you’re Benjamin Cumberbitch, good luck to you.”—Danny

“I don’t know why guys are shady about this stuff, they don’t like to go public sometimes unless they feel like there’s a real chance they’ll lose their girl.”—Peter

“They barely even needed me. I mean, Kim’s canal is spectacular and Kanye’s tender birthing rap really just did the rest.”—Sheila, on birthing the Kardashian baby

“I like my booze two ways only: straight up and by myself.”—Danny

“Hey, quit eye-boinking my sister. I would rather her date another death row inmate than you.”—Peter

“Oh you finally decided to go on lithium. I think it’s brave.”—Betsy

“Mindy, I’m sorry I’m late, I was on the phone turning down another award, the golden vulva.”—Sheila

“I do care. I don’t know much about the topic ’cause I find it boring.”—Mindy

“I don’t need anyone’s permission to date Sally except her and my mom.”—Danny

“Our Kegel toning machine has to be serviced at the Swiss monastery where it was built.”—Sheila

“The rich and famous need medical help just as much as everyone else. Maybe even more so, because they all have herpes.”—Sheila

So what did you think, “Mindy” fans? Are you disappointed Danny and Mindy’s relationship was so short-lived? Do you think Peter would step in and be Mindy’s next conquest? What about Betsy’s unrequited, and ignored, declarations of love? What were your favorite lines?