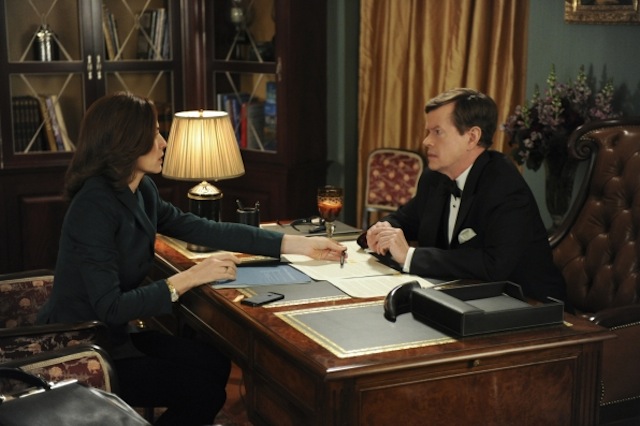 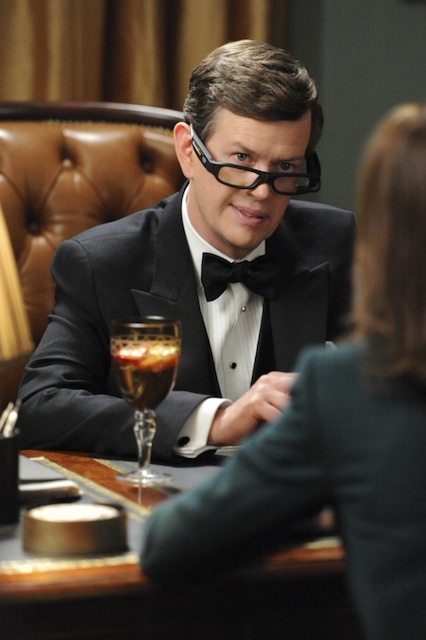 My oh my, good-wifers. Our favorite sexy sociopath, Colin Sweeney, is back and up to his old shenanigans, this time with a new accomplice, on a new episode of “The Good Wife.” An episode directed, quite skillfully, by our dearly departed Will Gardner himself, Josh Charles.

Before we get into it, I have to say that every week I’m impressed with David Buckley’s brilliant music, but I don’t always mention it. So I’m going on record now: his music is exciting and beautiful, and adds so much to the show. Bravo.

Alicia goes to get a signature from Colin Sweeney (played with deliciously smarmy charm by Dylan Baker) at his apartment, during his bizarro engagement party, which looks like some demented Robert Palmer video. He’s so funny with his totally inappropriate puns and double entendres, not to mention his porn-star-matching glasses. The latest love of his life is Renata Ellard (the entertaining Laura Benanti), who seems to be a decent match for him, with her theories about women with three-syllable names. How little we know, yet.

Alicia has less than an hour to get Sweeney’s signatures in order to win her firm a hefty monetary bonus, and she succeeds—just as a blood-curdling scream comes from Renata, as she discovers the hanging body of her friend/sometime-lover in an upstairs bathroom.

Of course, Sweeney is the first suspect, but Alicia has to pass the potential suit to Cary, because she must serve as a witness. When the police instead arrest Renata, Alicia recommends Diane, who takes the case.

While Alicia’s chasing after Sweeney for his John Hancock, Eli frantically calls her about a photo making its way across the Internet, of Zach holding a bong. Zach of course denies that he was smoking, saying that he was preventing his friend from doing it, but sadly, no one believes him. I’m a little surprised Alicia doesn’t at least give him the benefit of the doubt.

Poor Peter is forced to do some clean up for Zach’s error—especially given Alicia’s brother Owen’s statements to the press, essentially saying he’s happy to see Zach loosen up a bit—and implicating his sister for excessive wine use. It’s so great to have Owen back. It’s been way too long, and Dallas Roberts is always so amusing. Plus he really wants the best for Alicia. He was always a champion for her relationship with Will, and really believes that he’s better for her than Peter is.

Everyone is implicating Alicia. She’s getting slack from all sides: first, Sweeney’s lawyer implies she’s hiding something about his innocence, then Owen blames her for intoxication. As Diane defends Renata, she puts Alicia on the stand, where they use her to poke holes in Renata’s case by making Alicia look biased (apparently Diane’s idea). Then, when Owen and Alicia try an intervention on Zach for his apparent drug use, Zach throws blame back at her by saying she and Peter are “playing Bill and Hillary.” Alicia’s forced to explain what that means to Owen. The good thing that comes from that, at least, is that Owen puts the idea in her head that she could, or should, start dating other people.

Meanwhile, Castro is taking Finn off of cases, and Alicia worries that he’s trying to fire him. He’s certainly been trying to pin his mistakes in the Grant case (and others, perhaps) on Finn, but it’s also apparent, especially when Finn leads the preliminary hearing against Renata, that he’s suffering from the trauma of the shooting, and could probably use some time off. I don’t think he’s had any, other than his brief stay in the hospital, and it’s unclear why not. Is he doing what Alicia did, and not admitting to needing some time away?

Just as I start thinking that I need to re-watch “Dramatics, Your Honor“ to remind myself how Finn was before the incident (except that I’m afraid to), Finn suffers extreme, terrifying flashbacks during his preliminary hearing. I’m definitely not ready to re-watch that horrific episode, since just these few moments made me hyperventilate. So powerful. (Those bastards.)

When Castro indeed tries to fire Finn, Finn informs him that he’s running for State’s Attorney against him (at Alicia’s suggestion)—and then frantically calls Alicia for help. She in turn asks Eli to get Finn signatures to qualify for the run, which grabs the attention of Peter, quickly leading to Peter endorsing Finn in the spirit of “new blood,” like him. (The look of shock on Finn’s face after the announcement is priceless.) I’m not sure what Peter has against Castro, unless he also finds him at least partially responsible for Will’s death (which Castro again pins on Finn). But perhaps he just didn’t like Castro sucking up to him for his endorsement, especially while suggesting the use of his apparent problem with Alicia as a way for Peter to show fairness by endorsing him anyway. So Castro’s just another person involving Alicia in something that really has nothing to do with her. And he probably has a problem with Alicia because she’s helping Finn.

Sweeney reminds us that Diane is channeling Will—which makes her very attractive to him. (What a piece of work!) Clearly convinced of their guilt now, Alicia asks him whether he or Renata committed the murder. After the judge finds no probable cause and releases Renata, she admits to Alicia that she did in fact do it so that she and Sweeney could have an experience in common. She really is a perfect match for him, right down to the inappropriate “tie the knot” pun.

So what did you think, good-wifers? Did you suspect Renata all along? Or did you think it was Sweeney? What about Zach? Is he guiltier than he admits? Are you excited to see Alicia date next week? What do you think will happen? Spin your theories in the comments.