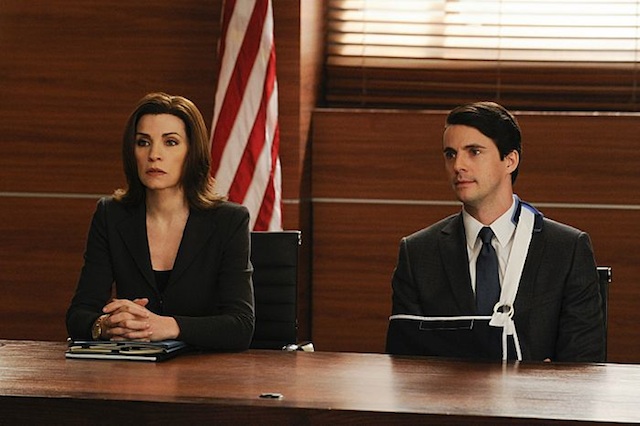 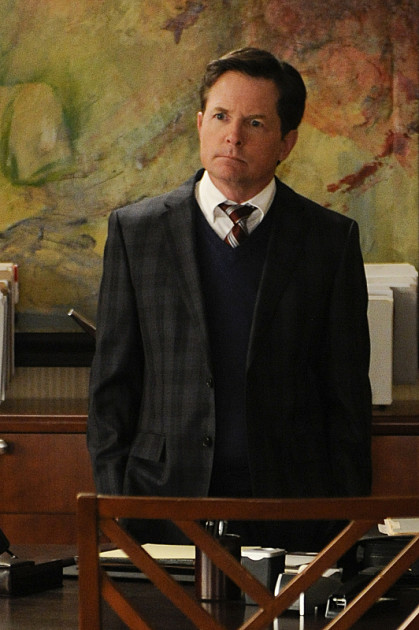 Well good-wifers, we’re back—and so is Alicia! While she starts this new episode of “The Good Wife” still just a little off, lying in bed, easily shaken by crime photos (understandably), and making careless mistakes while defending Finn Polmar, she comes back to her badass self by the end of the episode. And it’s thrilling to see.

A number of the open storylines this season are suddenly wrapped up too, as Alicia and company shut them down one by one. By episode’s end, Alicia’s instantly over Will’s death, or at least ready to move on (though I’m still not), the NSA wire-tapping thread is now complete, and the case against Finn is squashed.

The episode starts with our favorite NSA worker, Jeff Dellinger, aka Dell (Zach Woods) going through a supposedly routine polygraph test. He notices some additional questions about taking home confidential material or sharing it with others, and gets nervous. After discussing it with his coworkers, a sort of NSA Greek chorus that also fills us in on activities at Florrick-Agos, he decides he might be in trouble and goes to the law firm for help.

It seems like an odd, and not too bright, choice for Dell to go to FA for assistance, especially since the NSA is targeting them. Does he not have other lawyers he could call on? What’s more, just the fact that he’s asking for help implies that he’s guilty. In other words, if he weren’t guilty before for accidentally taking home a jump drive with classified information on it, wouldn’t he be leaking information now that he’s telling lawyers about his situation?

Since Alicia’s been ill and out of sorts, Cary decides to take control, making decisions without her. He agrees to take Dell’s case, even though Alicia would prefer that they think about it first. It turns out to be useful for them, though, because she eventually gets Dell to admit that the NSA has been listening to them, and to Peter’s office. This news also wakes Alicia out of her stupor, and she fights back.

Cary and our favorite lawyer in training, Clarke, work the case, while Alicia warns Peter and Eli of the wire-tapping. Peter calls his senator friend and asks whether they’re being monitored—knowing that the senator probably won’t tell him the truth. When the senator tells Peter he’s in the clear, Peter forces the senator to talk about something he doesn’t want picked up by the NSA. The senator reluctantly admits that Peter and Alicia are being monitored because of orders from Dell’s boss. Peter gets the senator to remove the tapping from Peter’s office, as well as Alicia’s firm, and FA successfully clears the case against Dell (though he doesn’t appear back at work), and gets his boss thrown out. While the bit with Dell’s boss getting phone calls from various men with Arabic-sounding names is entertaining, it seems somewhat juvenile, especially for a respected law office (if they were in fact responsible).

Newly fired-up Alicia returns to Finn’s side to help him out of trouble. Finn starts believing what State’s Attorney Castro is accusing him of: that he caused Will’s death by putting Jeffery Grant in general detention with other hardened criminals, a ploy the SA’s office apparently uses frequently to break people into confessing. Alicia proves that Castro himself not only assigns general detention but perhaps takes some relish in it, showing that Finn is not guilty here because he was following protocol.

Meanwhile, Lockhart-Gardner instantly has a new partner—in Louis Canning (interesting that it sounds a little like “loose cannon”). While it seems Alicia’s storyline picks up where we left off (unless she remained in bed for many days), the LG story feels like days or even weeks later, because they’ve merged with Louis (if not his whole firm) rather instantly, and he even has more votes than Diane. He’s throwing his weight around and trying to replace Will, and possibly push Diane out, which of course will never happen and ticks off Kalinda in the process. However, he proves to help the company and Diane out, correcting some of the changes that Will made a little recklessly, now that they’re in it together. “I might be a scumbag,” he tells them, “but I’m your scumbag.” I guess that’s something.

As the episode ends, Alicia kindly thanks Peter for removing the wire-tapping. What seems like it could be a moment of reconciliation becomes a strengthening of what she demanded last week, as they review calendar dates for upcoming official events: Their relationship will be for appearances only.

Well, phew. Thus ends a heavy few weeks full of turmoil and heartbreak. Now that all the Sturm und Drang is over (at least the current sturm und drang), I imagine we’ll be getting back to the episodic stuff, starting with next week’s return of our favorite sexy psychopath, Colin Sweeney!

So what do you think, good-wifers? Is everyone finally moving on from Will’s death? Is that really the end of the wire-tapping story? Where do you think Dell ended up, and will we see him again? Are you excited to see Colin Sweeney next week? Hit the comments and let us know.