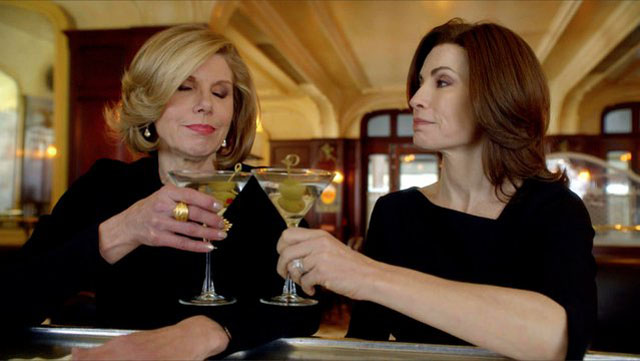 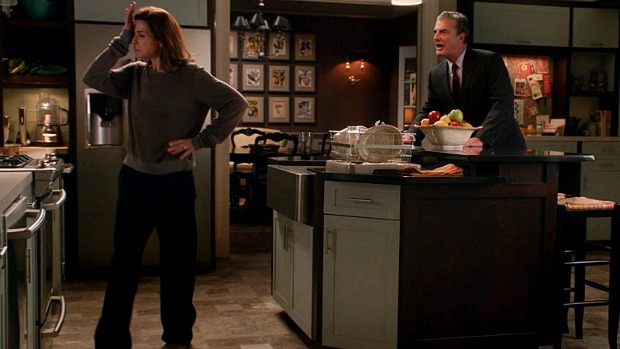 Welcome back, good-wifers. Don’t know about you, but I’m not sure I’ll ever get past the anger phase of dealing with Will’s death. Fortunately, I appear to not be the only one.

In this week’s episode, everyone copes with their grief in different ways, though perhaps not aware that’s what they’re doing. Diane longs for peace but steps up her game, as David attempts to wrest power from her. Kalinda tries to escape into sex, while Alicia fights back in court, until it’s too much and she crawls into a cocoon for a few days. The most important thing for everyone is to repress any and all emotion, because that is considered a weakness.

Diane and Alicia share martinis after the funeral, and speak frankly—or at least hint or joke freely—about Alicia’s relationship with Will. “We’re like two mistresses at an Irish funeral,” Diane says, adding, “I meant that metaphorically.” This probably encourages Alicia along the path that leads her to the explosive last five minutes of the episode, but we’ll come back to that later.

Alicia and Diane are opposing each other in a contentious divorce case, made all the more contentious by David. Alicia represents the wife, while Diane and David the husband, but Alicia and Diane agree during their post-funeral drinks to settle the case, in an attempt to find some peace. They even discuss the idea of merging their firms. (This begs the question, why did they suffer through the first two-thirds of the season the way they did, but I digress.)

Diane clearly wants to get more weight in her corner, someone else on her side, especially now that David returns to his obnoxious jerk-like self. He’s clearly following his own agenda in the divorce case, refusing to accept a settlement, and tries to take control of the firm by teaming up with Damian Boyle.

Fascinating gender issues abound in this episode, particularly in the way people deal with grief. Diane and Alicia toast to Will and agree that he was “a real man,” but without giving much explanation of what that means. They then spend much of the episode trying to prove that they can also be “real men.” They refuse to show any emotion or weakness; they try to gain, or remain in power; they refuse help from people when it’s offered.

Alicia fights back during the divorce proceedings, but when she talks about the husband’s theories on life and death, it hits her hard, and she has second thoughts about her whole livelihood, questioning why she became a lawyer, but with no idea what she would do instead. She escapes from the courthouse, goes home, and crawls bottom first under her bed covers. I can’t say I blame her, I’ve felt much the same way these past few weeks.

It frustrates me, though, that Alicia’s annoyed with people asking if she’s ok, especially when it becomes clear that she’s not. She fights off her emotions so hard that they strike back, and she finally gives herself a chance to grieve—yet she still won’t admit that’s what she’s doing. There is nothing wrong with grieving after a loss, and people expect you to, yet she assumes people think she is weak when they ask after her.

Ironically, because she didn’t take grieving time off immediately after the death when everyone expected her to, she seems a little unhinged now that people are wondering where she is. Peter even has the absolute gall to tell Alicia she’s not handling it well. Perhaps she should have given herself time when everyone expected her to, but there is no right or wrong time to grieve. We handle these things in the best way we can.

Diane wants some peace but, oxymoronically, is willing to fight for it. Like Alicia, she also feels pressure to be strong so that people don’t think her incapable. Alicia and Diane both seem surrounded by men who assume that because they are women, they cannot handle the sorrow or the change. Ridiculous.

Kalinda, already tough and forceful, deals with her sorrow a different way: through sex. Problem is, it doesn’t work. She’s haunted by Will’s death, especially having been in the courthouse when it happened and seeing his body in the hospital. When she goes to Cary’s apartment to have mindless sex with him, it doesn’t work, and she leaves just as quickly.

She turns instead to Jenna, where apparently she has more luck—but she also has an ulterior motive: to access Jenna’s files (is that what they’re calling it?) and find dirt on Boyle so she can force him to resign from Lockhart-Gardner. While her plan works and Boyle leaves the firm, giving Diane the upper hand once again, Kalinda’s actions are not without their consequences, as Jenna smacks the bejesus out of Kalinda. So much for that relationship, if you can really call it one.

I’m starting to feel for Finn. I don’t want him to replace Will, though he essentially is (creators Robert and Michelle King have said he replaces the male energy that Josh Charles brought to the show), but I like him. He’s been through a lot, and he’s sensitive to what Alicia is going through—and seems to be the only one. He visits her at her home because she missed a meeting, and he realizes just how important Will must have been to her, stating, “it doesn’t get solved quickly and you can’t just shake it off.”

They have a good rapport, and it’s getting better (possibly even heading toward romance, though I’m not ready for that yet). He’s also headed for trouble, as the counter suit for Jeffery Grant heats up. But was Finn at fault, dropping the case against the professor too quickly, or was it State’s Attorney James Castro (Michael Cerveris)?

Incidentally, I love that because the show films in New York, they have their pick of Broadway actors, like Cerveris, and the amazing Donna Murphy as the divorce judge. Speaking of casting, did anyone else recognize the husband as the wacked-out director of Joey’s spaceman play in those season 3 episodes of “Friends”? Or am I the only crazed “Friends” junkie out there who remembers?

In the breathtaking, game changing last five minutes, Alicia throws Peter out! She agrees to maintain their marriage strictly for appearances, because they both benefit each other professionally, but she gives him freedom to sleep with whomever he wishes, as long as he keeps it from the kids. Peter, of course, assumes Alicia wants to sleep with someone else. He clearly doesn’t get it, though I agree that it seems slightly out of nowhere because they’ve been trying to reconcile for so long. But now he knows, if he didn’t before, just how important Will is to her. Why did it take Alicia so long to figure it out? I guess you just don’t know what you have till it’s gone.

The episode ends as David sets the next phase in motion by calling opposing lawyer Louis Canning (the always entertaining Michael J. Fox) and asks what he thinks of merging. More cannon fodder in the battle for power!

So what do you think, good-wifers? Has Alicia finally done the right thing by kicking Peter out? Will she be able to move on, perhaps with Finn? What gives David the power to merge with Canning, and is it a good move? Discuss in the comments.