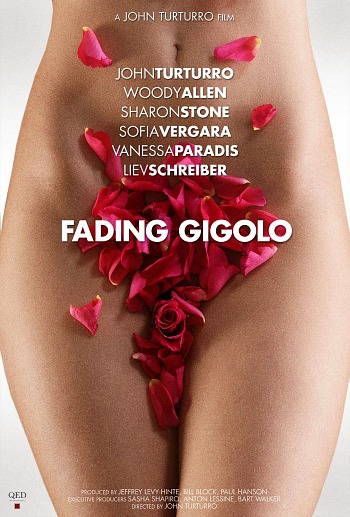 John Turturro plays a sexual dynamo for hire in “Fading Gigolo,” which he directed and wrote. It’s not easy to believe women who look like Sofia Vergara, Sharon Stone and Vanessa Paradis need to pay a man to have sex with them, but Turturro’s character, Fioravante, an underemployed florist, is such a sweet and lovable character – his skill has less to do with sexual technique than an ability to know what women need – that you end up buying the unlikely premise of the film.

Oh, and veteran director Woody Allen plays his pimp, who goes by the name of Dan Bongo no less, and calls Fioravante his ‘ho.

Last week Turturro, Paradis and Vergara turned up at a press conference at the Crosby Street Hotel to promote the bittersweet comedy.

The film came about, Turturro said, as the result of an offhand remark he made to his barber – which he shared with Allen – in which he said he’d like to make a movie where he played a male prostitute and Woody Allen was his pimp. The barber relayed the idea to Allen and soon afterwards, Allen called Turturro and said he was in.

“He just told me to write the draft and he would give me his feedback. I didn’t know what that meant exactly, and then when I received it, I was like, “Whoa! Wow! This is feedback!” It was brutal basically, but it was a first stab at something and I hadn’t really kind of gotten into the world personally yet.”

Woody’s suggestions were vague, but he told Turturro, “’Don’t you want to do something more sophisticated?’ and I said yes, but he didn’t tell me how to do that. So I had to find my own way and basically, I would do another draft and he would say, ‘This works, and you should develop that…’ He made some very good comments without telling me what to do.”

Then in the middle of the project Turturro, who worked on the film on and off for two years, directed one of Allen’s one-act plays on Broadway and they became closer. “You see some of our relationship in the movie in an imaginary circumstance, and that wouldn’t have been if we hadn’t gotten to know each other that way.”

From the first day on set, though, Allen flubbed his lines. “And I was thinking, ‘Oh my God!’ He skipped like three paragraphs and my first note to him after cut was, ‘I think you jumped from here to here and he was like, ‘Oh God!’ and so, I was looking at him thinking, ‘I have to actually tell Woody Allen what to do.'”

After about 30 minutes, Turturro said, it was ok. “He was really easy to work with and he was good with everyone. And he was good off camera.”

Click the images for larger views and sharing options. All photos by Paula Schwartz.

Vergara was asked how she got into character to find the right man.

“I don’t think we were looking for the right man. We were paying for the right man,” Vergara said. Everyone laughed. “I don’t think we were putting too much thought into it. It was like handed to them and personally for me it’s chemistry. I think these women were a little bit … they needed maybe to do this in their life because they have a little emptiness, something, even though you see that they’re powerful, beautiful. They’re successful, worldly. I think when you need to do something like this, it’s because you’re lacking something, and I guess – I don’t want to judge them – I think if this was what they needed at the moment in their life and they had the money and they could afford it, why not?”

“My character is not looking for it, but Woody Allen’s character starts to inform her that there’s something else in her that she’s seeking; she’s interested in knowing what’s out there, five miles away in Manhattan. She’s curious and wants to be happy.”

Vergara, as much a live wire in real life as her character on “Modern Family,” was asked if she ever felt stereotyped and wanted to play a serious, dramatic role.

Vergara added, “I think you know, you have to know your limitations. Of course I’m not going to tell my agent, you have to let them see me … they’re casting ‘Schindler’s List,’ I want to be in that movie.”

“I know where I can have fun and do a good job, and I met John and I knew — I’m very insecure about the acting because I’ve never done it until recently — and I knew I like to be directed and he told me exactly what he wanted from me. He was a lot of fun. I think you have to be grateful.”

She added, “After all the opportunities like this movie that I have gotten, I don’t think I have to be complaining, ‘Oh they don’t let me cry or let me be raped in a movie.’”

As for the ménage a trois scene, Vergara admitted she was a little anxious at first. “I’ve never done anything like that, but I think he was more nervous than I, so once I saw him nervous, I got relaxed.”