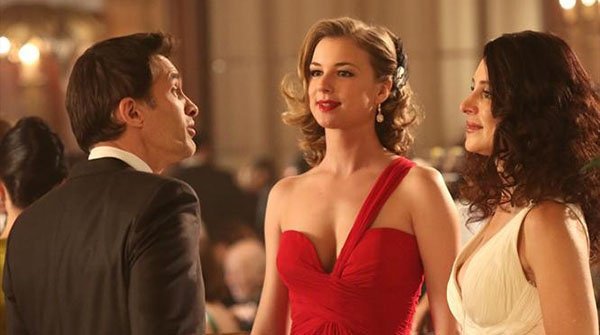 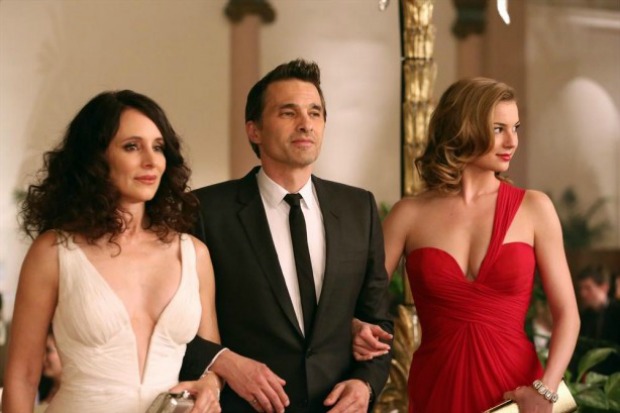 Well, we’re getting down to the nitty-gritty now.  Only a few more episodes until the finale. Can you believe it? I’m trying to figure out what’s going to be the big cliffhanger. Any ideas? I think it might end with one of the Graysons figuring out who Emily really is. They can’t go another season without finding out … or can they?

Emily and Nolan focus on the letter to Conrad and what “TWM” means and how it relates to her father. She has some sadness about Aiden, and Nolan tells her to let him know. Well, she does and he doesn’t seem to care or want to help dissect the letter. Ouch. Later, though, he comes back to the Hamptons to help. Awww. We’ll see about that…

Emily plots and plots. How to get to Pascal – and how to get him to divulge Grayson family secrets. Not as easy as she thought. He isn’t falling for her charms, but of course, Emily doesn’t mind. She figures out another way to get him on her side – by throwing a huge benefit gala for his foundation. So sweet of her, but not really. Emily also meets Stevie to talk about the past, and finds out that Pascal and Victoria dated before she married Conrad.

Later, Victoria, Daniel and Charlotte crash the party, and don’t you think Daniel is acting as bad as his awful father? I guess you can’t blame him. Victoria and Emily are pitted against each other in a poker game, by Pascal’s doing. Victoria lets Emily win (you knew there had to be a reason), and Pascal takes Ems to his private office.

I love that Emily figured out very quickly that she was being recorded and that Victoria was probably in on it – which she was. Hum. Ems didn’t get any information, but I’m sure she’ll figure out a way to get the goods.

Boy, is Daniel making me dislike him. Yes, I know Emily has been terrible to him, but he’s really being a major jerk. What did you think about him wanting to go after Emily’s friends? That sounds like Conrad, as I said before.

Worse, he’s trying to steer Margaux away from Jack. I can’t believe he said Jack and Emily were now free to be together, and I especially can’t believe that Margaux would buy any of his story – she’s too smart for that. Come on! It was surprising that at the gala, she confronted him about Emily.

I love Jack. He’s rugged, smart, good looking and kind. I like that he and his mom are slowly repairing their relationship. I still like her, but hope and pray that she doesn’t go off the wagon, as we almost saw in this episode. I also like that Jack told Margaux to take the job in Rome, even though he really wants her to stay. As long as Margaux can get out from under her father’s shadow … that’s what she really wants, and it looks like it might happen.

Nolan’s new friend, Javier, takes a liking to Charlotte. He plants a big one on her at the gala, even though he’s suppose to be under house arrest. He’s a tech geek and knows how to tamper with any type of system/computer. He should come in handy later in the big plot to take down the Graysons, right?!

Conrad finds out that Jack is Stevie’s son and laments his hurt feelings. Stevie felt bad about having an affair, but Conrad left her while she was in rehab (for Victoria … please), although she admits she pushed him away. It sounds like they did really love each other, and that Conrad changed after their divorce. Of course he did. He was trapped with Victoria.

Victoria visits Pascal and they discuss their next move … and kiss … a major lip lock!  Oh boy, her hatred for him changed quickly … or did it? I never know if she is on the up and up or not. She and Emily are two peas in a pod. They should just work together!

At the end, Aiden makes his return and says he knows what “TWM” means in the letter. It’s his father’s initials – Trevor Warren Mathis. Oh great, does that mean his dad was in on the plane coming down?

Things are really going to heat up next week! Be ready! I know I am!

Thoughts on this episode of “Revenge”? What’s your favorite storyline? Should they reveal who Emily really is in the finale?