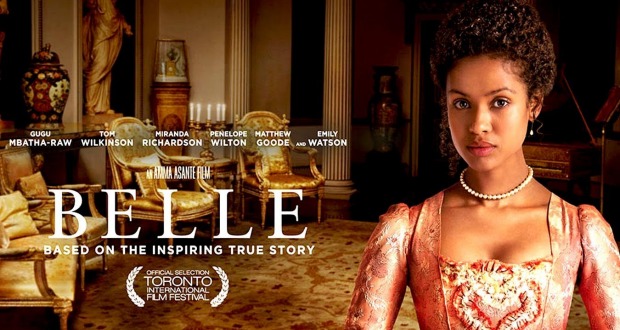 The British actress Gugu Mbatha-Raw takes on the lead role in the period drama “Belle,” a Jane Austen-like tale that features a black heroine who lives among the aristocracy where she never feels she belongs because of her skin color. Like Jane Austen’s book, the focus is on class, money and feminism. But the film also takes a hard look at slavery in 18th Century England and how Belle, based on a real person, may have played a role in its abolition.

The actress plays the biracial illegitimate child of a Royal Navy captain, who was raised by Lord Mansfield (Tom Wilkinson), the highest justice in the land. His decisions were instrumental in overturning slavery in England. The movies suggests his love for Belle, who he raised as his own daughter, may have been the impetus for some of his rulings against slavery’s horrors. (Emily Watson plays Lady Mansfield.) Sam Reid (Belle’s love interest), Miranda Richardson, Sarah Gadon, Tom Felton and Matthew Goode round out the cast.

Amma Asante directed “Belle,” which was scripted by Misan Sagay.

At a junket for “Belle” last weekend, Gugu Mbatha-Raw spoke to the press about the film. Below are highlights from her interview.

What was it like for you to tell this new story in a period that we see often in film but with a completely different point of view?

It was so exciting because, exactly as you said, this is such a familiar classic period drama, and we’ve seen so many period dramas over the years of Jane Austen and that sort of style but never told from this perspective before. To have a woman at the center of it, and not just a woman, but a biracial woman and directed by a woman, written by a woman, it was really refreshing to be able to explore this love story as well as having it all grounded by this social political context of the time. To me, that really weighted it in reality and made it feel very contemporary.

And I think it’s just quite arresting to see someone who looks like me at the center of it … and not a slave, not in a subservient brutalized role. Given a ladylike education and be articulate. I think that that was something that Amma [Asante] was keen to see represented and a voice of a strong and educated and articulate woman of color on the screen.

What did you see of your much vaunted, and hopefully going away, class structure in England?

Growing up in the U.K., class has become such a taboo subject because it really is the structure of the society. And as I learned from this film, I’m glad the social conditioning is not as constrained nowadays as it was then.

The whole idea of being able to break the rules and that society can endow you with all these expectations and labels but you don’t have to accept them [laughs].

What were the characteristics of Belle that you can most relate to in your life?

I suppose that she’s feisty and determined, and I also grew up in the countryside-ish in a small town — Witney in Oxfordshire — so I can relate to that sort of protected upbringing. And yeah, her determination is kind of what I relate to most as a characteristic because I knew about this project almost seven years before it came into fruition. So to be able to hold something in the back of your mind like that and hope that’s it going to one day work out for you … and I think in this industry, you have to have quite a strong sense of self because people will endow you with roles and types and all of that stuff. So yeah, there’s a lot that I can relate to [laughs].

Were you attached to the project for those seven years?

How did you first hear about it?

When I met the producer, Damian Jones, he told me about this painting and had I heard of Dido, and at that stage, there was no script. It was just an idea, and he was working on the idea of making it into a film. Then years later, I met Amma Asante for a completely different project, and then Damian did ‘The Iron Lady’ and that sort of meant that Belle could happen with a bit more momentum. So I guess that journey has been epic.

Will you talk about the costumes you had to wear? How did you feel about having to strap up every night in the corsets?

The corsets definitely took a lot of getting used to. I usually felt very poised, I suppose. It took about 20 minutes once they were on to kind of get used to breathing normally, but they gave me so much in terms of physicality and in terms of grace and posture. I start sitting up straight now just talking about them because you can’t even bend over at the waist. You can’t do your shoelaces. You can’t really walk upstairs without getting out of breath so suddenly you become this delicate flower on a physical level, which was kind interesting for me. They give you so much in terms of knowing as a woman what it felt like to be in society at that time, and to be constrained and constricted.

There was some theory that with your lungs compressed like that you don’t get as much oxygen to your brain. Those poor women can’t think clearly. I don’t know if that’s true, but it was the idea that women in that time very much are not in a position of power and freedom. For me, I loved scenes that I had in my nightgown [laughs]. Me and Sarah Gadon, we have these sisterhood scenes in our nightgowns and we would just lie there and feel so free. That was kind of nice to have that contrast between the outside world and these young girls that were basically trying to be women. Then you see them and they’re in their little nighties and so free and childlike.

What was it like working with Amma Asante, who’s only directed one previous film?

I’ve worked on things before where you have about three different versions. You have the script that you read, the film that you shoot and then the final edit of the film. And sometimes they can be completely different things. And for me, what was a testament to Amma’s determination and vision and single mindedness about the story. When I saw the film, it was everything that we talked about and more, but I recognized it. There were no nasty surprises, apart from the shock of seeing yourself, which is always a bit weird, that she’d really captured every nuance. That was the thing that was so wonderful to work with her … she wants those details and she wanted to capture those moments, those thoughts and to create the character’s vibrant inner life so that we can relate to them on a human level and we’re not just looking at some archetype.

You have ‘Blackbird’ coming up, also by another black director [Gina Prince-Bythewood]. What’s that going to be like?

Completely different! I mean, get ready because it could not be more different than “Belle,” and I’m really glad to have them coming out in the same year because they’re so contrasting. It’s very contemporary. I play a pop star and win a Grammy Award at the beginning of the film, and then try to throw myself off a hotel balcony. So it’s dealing with the psychological implications of fame and the toxic nature of the music industry and how that can be exploitative for young women when they’re packaged from a very young age. So it was all issues that I thought were really worth exploring and very contemporary.

And like Belle with a father-daughter dynamic, I have a mother-daughter dynamic with a momager character played by Minnie Driver. I like that, even though it’s a completely different setting, it definitely explores the issues of identity. This girl has very much had her identity in the industry shaped for her, and she is able to break free during the course of the film and sort of find her authentic self. So that’s definitely a theme that seems to be running through my work at the moment.

It all starts with the portrait of Dido and her half cousin Elizabeth that inspired both the director and screenwriter to create the film. What quality did you most want to capture from that painting?

She so clearly has so much personality. So her sense of mischief and also just the life force, there was such a twinkle in her eyes that I felt a real responsibility to make Dido come alive.