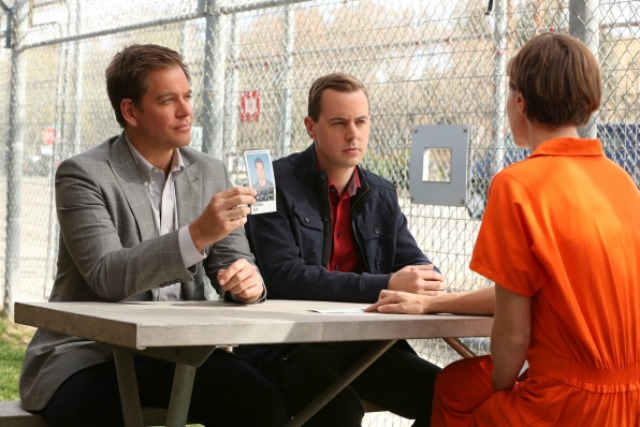 Hooray! I hope we can all agree that this was a good episode of “NCIS.” In my opinion, one of the strongest of the season. The case was strong, it was smart, it wasn’t boring, it was funny, the team felt like a team, there was some good stuff going on in the character front with McGee and Delilah … In short, I was pretty pleased with this episode.

At the start of the episode, when Delilah discovers an encrypted email which is linked to a naval intelligence officer killed in Budapest two weeks prior, and addressed to someone they’ve been tracking, her boss deletes the email and tells Delilah that she “did not see it.” What I loved here is that she wasn’t told anything else. She wasn’t told that there was some special undercover operation going on. It was up to her to go and figure out what this was about, leaving the viewer feeling the same curiosity as Delilah. 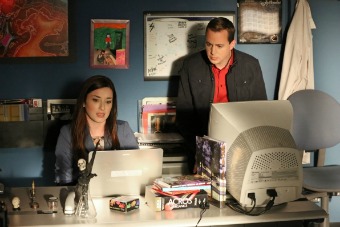 Delilah goes to “NCIS” for help. She calls Tony, who is sitting next to McGee, but because she doesn’t want McGee to know, Tony hides in an equipment closet where he finds his cardboard self from several years ago. He is then, of course, dicovered by McGee and Gibbs, so everyone is involved in the case after all.

The email mentioned a rental address in Virginia. This is the only lead they have, so they go to check it out. But since they’re not supposed to be investigating this, they have to use a cover. Delilah has already called the landlord who is “more than willing to let animal control check for rats.”

The following scene with McGee and Tony actually pretending to be with animal control was pretty hilarious. The landlord tells them that the last tenant paid for six months in cash but only stayed for a week. However with all the questions Tony and McGee are asking, the man is pretty confused as to why they need to know these things, and McGee comes up with a story about how this guy was selling illegal chinchillas and had them breed with common house rats, resulting in very violent, dangerous offspring.

I laughed so hard at this! Never in my life would I have expected to hear such  a chinchilla story on “NCIS.” Also loved that it was McGee coming up with this story. All these years of working with Tony must have rubbed off on him.

They find out the naval intelligence officer who died in Budapest, Lt. Kit Jones, is not actually dead when McGee finds his print in the apartment. Jones was tracking hidden websites. Some sort of online underground black market thing. Apparently, there’s a lot of those websites. Much more than normal ones. I guess you just don’t know that kind of thing when you’re not involved in any funny business. One particular website Jones was tracking was Phoenician Exchange.

Our “NCIS” team learns that the CIA took Jones. One thing fans will know is that it’s never good when the CIA is involved. Officer Brisco says that Jones’s investigations overlapped with some CIA money laundering operation. They put Jones undercover. The CIA won’t let “NCIS” talk to Jones.

McGee and Dinozzo interview a woman in prison who used to run the website, but she won’t talk at all. Bishop suggests finding a vendor to get to the website and hopefully be able to track the administrator. Delilah’s ex, nicknamed Samson, is a vendor. They get him to give up his user name and password for a coffee date to catch up with Delilah. McGee, Abby, and Delilah all work together and find out that the bad guys are using classified D.O.D. security protocols. The codes were developed to find hidden websites, but are now being used to protect this website. How did they get access to these codes? Is Jones a double agent?

I really liked the scene in the lab with these three working together. It was real teamwork like we used to have with Abby and McGee all the time, cracking codes, fast paced. Now, it included Delilah, and it felt totally natural to have her there.

Shortly after, Ducky and Jimmy discover through a tiny bit of DNA and an even tinier amount of blood found at the apartment, that  Jones was being held prisoner. His blood indicates that he is suffering from malnutrition, and they also found traces of a sedative. Have the CIA lost their minds?

Of course, Brisco claims he had no idea. All contact between him and Jones was through email. However, it is soon discovered that Brisco was involved after all. Delilah decrypts the codes Jones is giving the bad guys to protect the website and discovers that he is leaving bread crumbs, allowing them to see who has been accessing the website. A trace leads to a nearby hospital. Ronald Troutman, the landowner is a patient there. He told Tony and McGee he needed surgery on his knee.

They manage to swap hard drives but face a problem when it turns out the hard drive from Troutman’s laptop is wiped. Meanwhile, Tony is monitoring Jones’s fiancé’s phone records and sees she just received six one-second calls from a restaurant. The restaurant where Jones proposed to her, as she had told them earlier. They go there and find Jones, very nervous. When Gibbs tells him they want to help, he says, “That’s what the alst guy said.” He means Brisco, who, Jones says, was holding him.

They go back to question Troutman when he’s awake, but find out he doesn’t know anything about computers so he could not possibly be behind this website. The laptop turns out to be his daughter’s — a pre-med student who thought she found a clever way to make some extra money. We see her meet with Brisco and afterwards find out that Gibbs had already gotten to her. She wore a bug during the meeting, providing NCIS with evidence against Brisco.

Now, about Delilah, I thought a few things were interesting. Firstly, the fact that she contacted Tony instead of McGee when she wanted to ask for help on this case. She was doing something her boss didn’t want her to do and McGee worries about her a great deal. We saw that last time she appeared in “Bulletproof”.

Of course, I don’t know if the writers did this consciously, but it seemed to me that Delilah went to Tony for the same reason that Ziva went to McGee for help in episode 10×21, “Berlin.” Tony would have worried too much and would have tried to stop Ziva. McGee would have been the same now. And he was, when he found out what Delilah was doing. The other interesting thing was that Gibbs went right along with her. I don’t think he did because of the case at first, but because he could see that Delilah needed this.

I must say I’m really upset about them shipping Delilah off to Dubai. She suddenly wants to get this Senior Analyst job. That’s fine, but did it have to be in Dubai?! I’m not one hundred percent sure that she’s actually going. It sounded like she was, but I don’t think she actually has the job yet, right? And yes, she and McGee will still be together, that’s what they both want, but if she really goes, that will be like the 50th female character leaving the show. Why can’t our agents just be in a relationship and have it work? Why do they all have to leave or die or turn out to be criminals? I really like Delilah, too. I don’t mean to be horrible, but I think she fits in better than Bishop.

Last (random) thing. I am very much intrigued as to why they mentioned Trent Kort several times throughout the episode. Yes, the link with CIA, I get that. But we haven’t heard a thing about Kort for several years, and now he’s suddenly mentioned at least three or four times in one episode.

I wonder if there’s a reason for that. Is it just because fans have often criticized the way “NCIS” just forgets about past characters and never mentions them again, as if they never existed? Or is it in preparation for his return, maybe? Will he show up in France in the season’s penultimate episode? We’ll have to wait and see.

Your thoughts? Leave comments below!