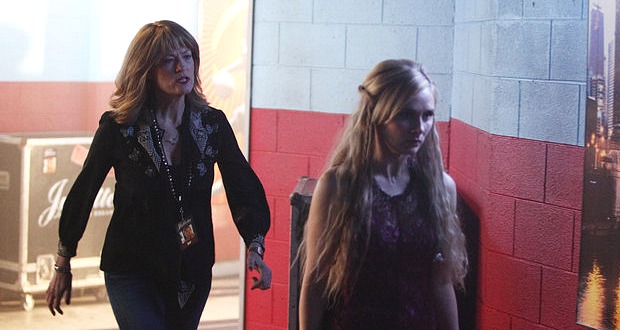 “Nashville” has been on a downswing lately. Like “Glee” of late, the show has been a bit tortuous to watch these last few episodes. The show “jumped the shark” for me with “I’m Tired of Pretending” (episode 9 of this season) when Juliette’s affair with Charlie Wentworth was discovered by his wife, and instead of being angry about his cheating ways, she just wants to get in on the action. There was so much cheese to be had in that scene, I felt I could have made dinner – all I needed was some macaroni. But this week’s episode has the show back on its game.

Maddie, in her defiant teen years, had posted a video of her singing under “Maddie Claybourne” but had to take it down once Rayna found out about it. Of course, as we know, anything that has made it on the web ultimately still lives on the web in one form or another, even if the original was removed. So was the case for Maddie’s video. A repost went viral and the question of who really is Maddie’s dad makes national news and the family has to decide how to deal with it. Deacon, Rayna, and Teddy come clean on “Good Morning America” about Maddie’s paternity.

Meanwhile, Zoey is still trying to get her foot in the door as a backup singer. She’s got new headshots, but what she really needs is a professional demo reel. Enter Gunnar. He receives his first royalty check and it’s for well over $400K. Astounded, he just wants to spend spend spend, but Zoey brings him back down to earth — not quick enough for him to pay for a professional recording session for her at a studio, though. Armed with new headshots and a pro reel, Zoey goes back to the agent, who now advises her to go out to Los Angeles, as more auditions and tours are booked there.

Juliette’s still trying to get back in the good graces of country music, but doors are being slammed in her face. Her manager suggests she charm Charlie Wentworth again, since he owns half the radio stations across the nation. Charlie thinks she wants to get back together and kisses her, but Juliette quashes that idea quickly.

The best part of this episode involves Scarlett. Already in a fragile state having to deal with the pressures of stardom, the pill-popping singer (with the seemingly bottomless bottle of pills from Liam) gets a surprise visit from Beverly, her abusive mother. All her childhood nightmares come to life as Beverly stirs things up and browbeats her daughter.

Her mom charms the strangers around her, revealing her dark side only to Scarlett. When Scarlett finds her singing during her sound check, Scarlett sits down and sings “Black Roses,” the song she wrote about her mom. Bowen’s performance was raw, gritty, intense. You can practically see her falling apart like the petals falling off those black roses.

Taking to pills and booze, Scarlett tries to get out of opening for Juliette, but Juliette denies her, not realizing she’s on the verge of a breakdown. Drunk and hopped up on pills, Scarlett takes to the stage, but sees her mother’s face everywhere and reverts back to the scared little child she was, finally breaking down, crawling under the piano in a fetal position in front of a crowded arena.

After Bowen’s performance in this episode, I feel like everyone’s storyline takes second place to Scarlett O’Connor’s. She was amazing in her slow descent into Scarlett’s personal hell.

It seems like the Claybourne/O’Connor family line is prone to dysfunction, which does not bode well for Maddie in the future.

I’m sure Juliette will ultimately be furious with Scarlett, since all the attention will be on her instead of Juliette. Though, she might be grateful the paparazzi is off her case.

What did you think of the episode of “Nashville”? What do you think is in store for Scarlett?