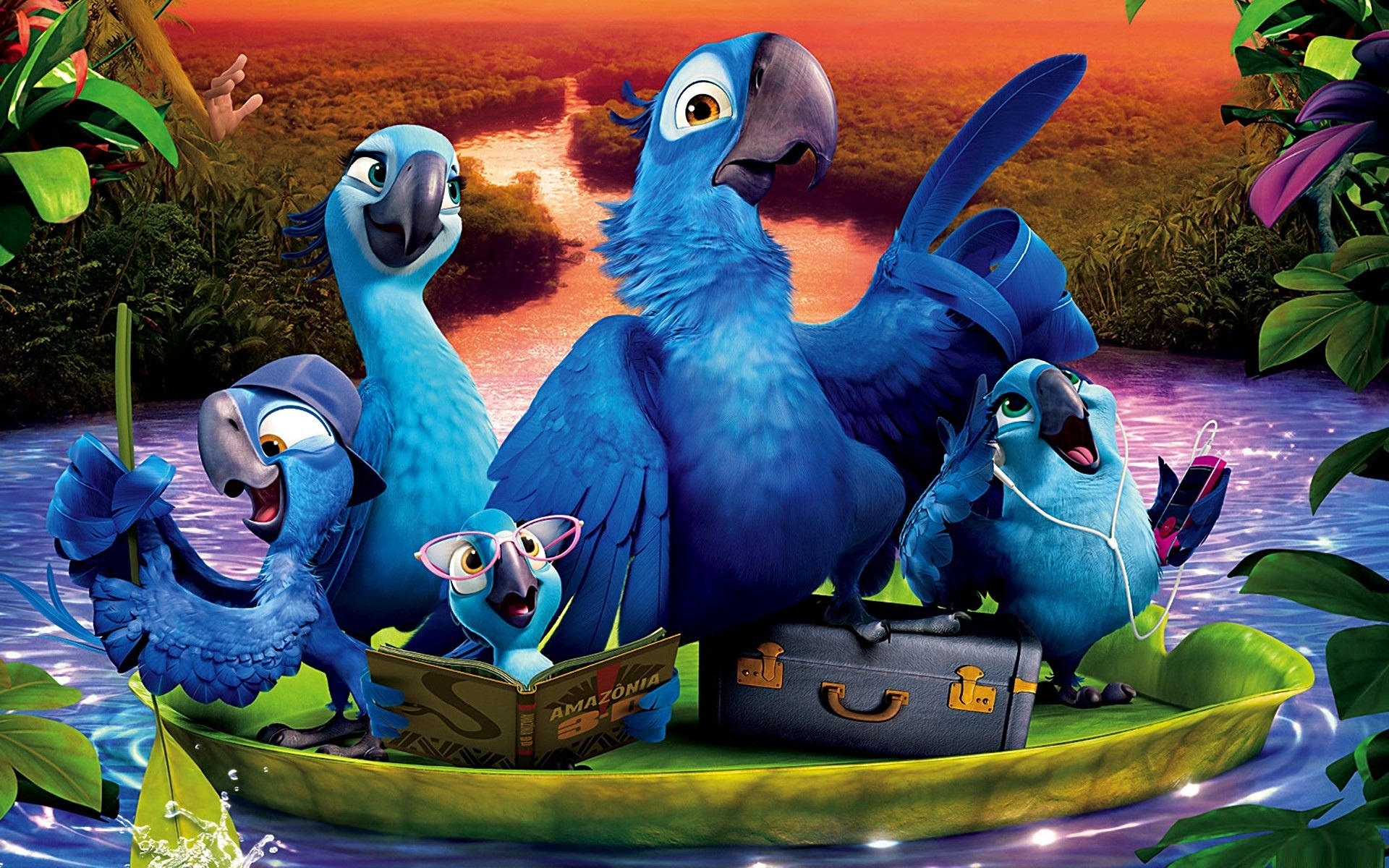 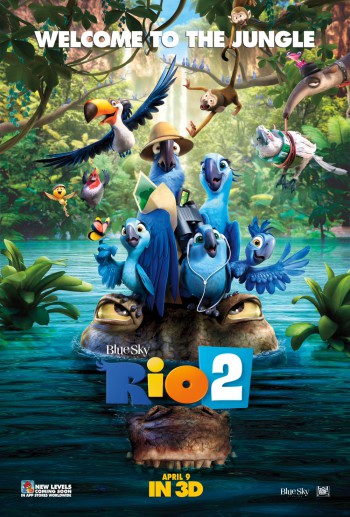 SYNOPSIS: It’s a jungle out there! Especially when our feathered friends Blu, Jewel and their three kids fly from Rio de Janeiro to the Amazon rainforest in search of more birds like them.  As Blu tries to fit in, he goes beak-to-beak with the vengeful Nigel, and meets the most fearsome adversary of all: his father-in-law.

REVIEW: I’m always so excited when a G movie comes along, especially one like “Rio 2” where it’s clear that the filmmakers put some time and effort into it. This movie is bright, colorful, features some great tunes, and brings back the beloved characters from “Rio,” along with some new ones.

As we’re reminded at the beginning of the movie, the gorgeous blue macaws are rare. So rare, in fact, that Blu (voiced by Jesse Eisenberg), Jewel (Anne Hathaway) and their three kids are the only birds of their kind on the planet. Or … are they…?

Now married, Blu and Jewel are now living in a bird sanctuary established by their married human friends Linda (Leslie Mann) and Tulio (Rodrigo Santoro). But during a trip to the Amazon, Linda and Tulio discover more blue macaws living in a remote cluster of Brazil nut trees deep in the rainforest. When this news spreads, Jewel decides it’s time for her overly domesticated family (the kids have iPods!) to take a trip to the Amazon and get back to nature. What they find is even better — Jewel’s father Eduardo (Andy Garcia), her old boyfriend Roberto (Bruno Mars), and a whole flock of birds just like them.

Blu, whose culinary specialty is pancakes back at the sanctuary, has a tough time acclimating to his new wild environment. He even wears this hilarious fanny pack around, keeps his GPS device handy, and carries a tool not unlike a Swiss Army knife (hey, that could come in handy in the rainforest – I’m with him on that).

But aside from the domestic issues and tough decisions faced by Blu and Jewel, there’s even more trouble brewing. Blu’s old nemesis Nigel (Jemaine Clement) and a greedy logging CEO are both set on destroying the macaws and their habitat. But not if Blu has anything to say about it — and he does.

The story is perfect timing for Earth Day (April 20), as kids get an education on the destruction that’s still happening in the Amazon rainforest. There are some tense moments as the birds fight to save their habitat, but the villains aren’t too threatening and you know that all will be well.

I also love the musical numbers, which are spectacular, thanks to singers Bruno Mars, Kristin Chenoweth (who plays Gabi, a hilarious poison frog), Janelle Monae, will.i.am, Jemaine Clement and Anne Hathaway, who showed us her vocal chops in “Les Miserables.” There’s a side story about two bird factions battling for jungle real estate (seriously, isn’t there enough room for all? Maybe not if the loggers keep chopping trees down).

“Rio 2” is a fun, thoughtful installment to the franchise (I hope there will be more), and kids of all ages are sure to leave the theater happy and humming the tunes.

Be sure to get in your seats early enough to see “Almost Home,” a short film about a group of cute aliens (including an alien voiced by Steve Martin) in search of a new home.

Sex/Nudity: Blu and Jewel are now married, as are Linda and Tulio. They’re affectionate and kiss a couple of times. Jewel’s childhood sweetheart Roberto makes Blu jealous by preening around her and noting that if anything happens to Blu, he’ll take care of his family. Gabi the poisonous frog sings love song (operatically creepy) about wanting to be with her love, Nigel.

Violence/Gore: Nigel is determined to poison and kill Blu, and Gabi is willing to donate her poison to the cause. The blue and red macaws fight over jungle real estate and engage in a battle that’s a cross between a soccer game and a Quidditch match. Evil loggers fight the birds with cranes and other construction vehicles, while the birds peck and descend on them. The loggers also tie up Linda and Tulio in the jungle. One scene shows animals who keep getting eaten by predators, but it’s played for laughs (and the animals miraculously survive).

Which Kids Will Like It? Kids 5 and older who liked the first “Rio” movie or colorful animated movies with lots of action.

Will Parents Like It? “Rio 2” is cute and fun, with an ecological message for young viewers. It also emphasizes the importance of family and friends who work together when things get tough.