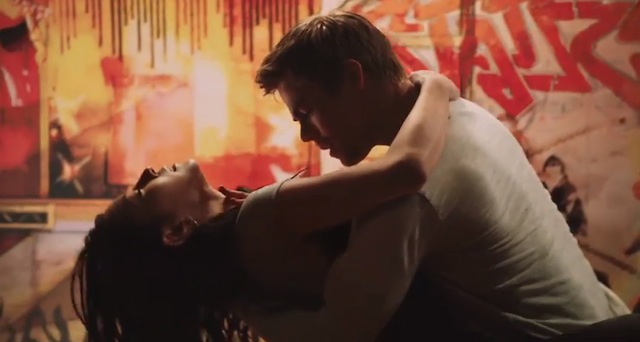 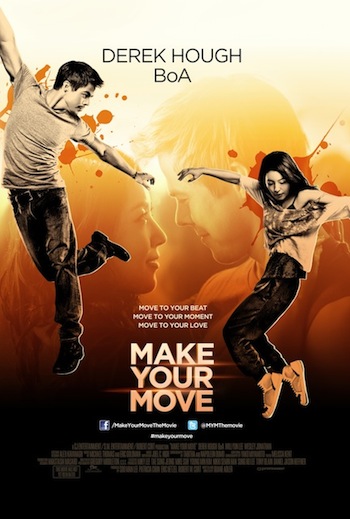 SYNOPSIS: A pair of star-crossed dancers in New York find themselves at the center of a bitter rivalry between their brothers’ underground dance clubs.

REVIEW: It’s fitting that I have trouble remembering the name of Derek Hough’s new dance movie, “Make Your Move,” opening this weekend, and yet it’s a perfect title. The title is about as generic and clichéd as you can get, and unfortunately, so is the movie.

Derek Hough is a major talent, there’s no denying it. He’s long been a favorite on “Dancing With the Stars,” and is a brilliant dancer and choreographer, as evidenced by his record five Mirror Ball trophies and his Emmy for Best Choreography. He’s also a good singer and musician, and contributes a song to the film. I’d even venture to say his acting isn’t terrible, at least not in the company he keeps in this movie. But his talent isn’t quite enough to carry the film, at least not without a lot of stomach pain.

I’m sad to write such a scathing review. I want so much to like the film, and believe it or not, I have a pretty high tolerance for romantic clichés and dance movie tropes. I can withstand even the most clichéd Hallmark Channel movies, as long as there’s some redeeming value, be it cuteness, sweetness, or decent acting.

Unfortunately, “Make Your Move” doesn’t have much to redeem it. It’s completely cliché-riddled, but not in a good way (how many times can I say “good grief” during a movie?), and the acting ranges from wooden to over the top. I can only blame the acting so much, though, because scriptwriter Duane Adler provides his actors with awful dialogue. So much of what happens and what people say is ridiculous, and slightly nauseating; it’s painful from the student production-looking opening credits to the end. It’s rare for me to want to walk out of a film (barring excessive violence), but I wanted to here.

The trumped-up plot is a watered-down “West Side Story” (with no deaths, alas) set between warring nightclubs in Brooklyn. Hough plays Donny (aka Tony), a street performer and ex-con tap dancing on corners in New Orleans whose parole officer will not allow him within feet of a bar, nor to leave New Orleans. Feeling stuck without any prospects, he disobeys both orders and heads for Brooklyn to be a dancer in his brother’s nightclub. (No matter, they essentially drop that plot point anyway.)

His brother, Nick (Wesley Jonathan), co-owned the club with his former best friend Kaz (our Bernardo, played by Will Yun Lee) until Kaz left to open a rival club with sleazy Wall Street guy Michael (Jefferson Brown). Michael, the mustache-twirling bad guy here, is obsessed with Kaz’s beautiful sister Aya (K-pop sensation BoA, and our Maria), a dancer and Taiko drummer with her own tap-hip-hop-drum fusion crew. Though Michael promises her everything, she refuses him to stand on her own, and in the process tries to convince Kaz how much he’s given up by working with Michael. When Donny and Aya meet in Nick’s club, of course the various men do everything they can to keep the two lovers apart, and tear their clubs down in the process.

Ok, fine, it’s a dance movie, and perhaps we shouldn’t expect too much. We don’t go to dance movies for the acting or the dialogue. And “Make Your Move” has plenty of dancing. The sparring nightclubs are both large venues with built-in stages and long wide bars that allow for dancing on (whether intended or not), where performers take the stage and viewers politely, if rowdily, pay attention. I’ve never been much into the nightclub scene, but I might have gone to more if I knew they were like this. Do such places exist in real life?

I wish I could say that the dancing in “Make Your Move” makes up for everything else, but alas, no. While in some ways dancing is practically ever-present throughout the movie, the camera cuts away so frequently that we don’t get to see much of it. Even Donny’s big number, his chance to really impress his brother, starts with Donny doing a very short tapping pass and then stopping, trying to show vulnerability. He repeats that pass a few more times before other dancers join him and they finally get into the number, but the pauses only serve to create frustration. The quick editing and constant camera movement wastes the talents of brilliant guest dancers like tapper Chloe Arnold and SYTYCD’s Allison Holker. It’s also sad that they felt the need to make tap more exciting by adding sparks when their shoes strike metal. Ridiculous.

The brilliant Napoleon and Tabitha Dumo, aka NappyTabs, resident lyric hip-hop choreographers on “So You Think You Can Dance,” co-choreographed the film too, and the two romantic dance numbers between Hough and BoA (a lovely little dancer, though not a great actor), are wonderful. They’re sexy and romantic and dance well together, despite BoA’s lack of previous partnering experience. Unfortunately, what we see of the rest of the dancing is repetitive. Hough is not known for his tapping, and while he’s very athletic and executes it amazingly, the actual tap seems pedestrian, as well as repetitive, as if Hough learned only a few slick passes and practiced them until he mastered them. Aya’s Taiko drumming company (the real Cobu Crew from New York) is cool, but also riddled with pauses, and a little goes a long way.

With such great talent as Hough and NappyTabs (and I suspect BoA, though I’m not familiar with her work) permeating this film, I really wish I could be more positive about it. All I can say is, save your money and look for the dance clips on YouTube.

JANE’S REEL RATING SYSTEM:One Reel – Even the Force can’t save it.Two Reels – Coulda been a contenderThree Reels – Something to talk about.Four Reels – You want the truth? Great flick!Five Reels – Wow! The stuff dreams are made of.