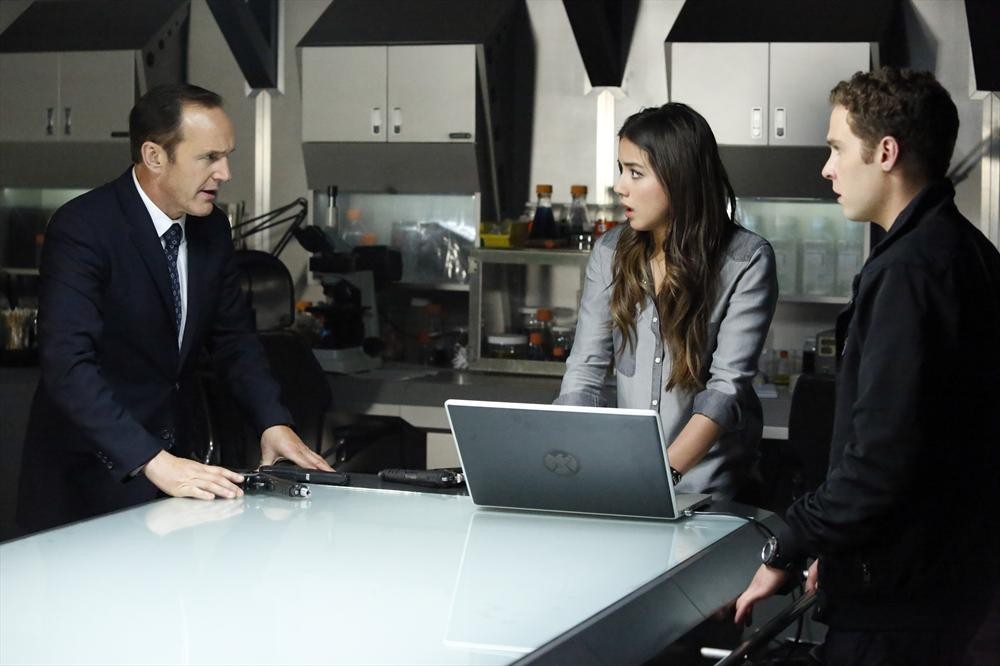 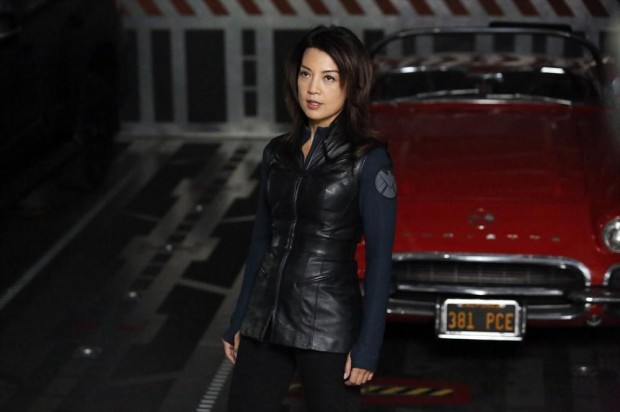 Well, that’s the first thing that popped in my mind when “Don’t Fear the Reaper” played as Agent Garrett was drinking some coffee, flying a plane. That SNL skit still makes me laugh every time.

The second thing I thought was I really need to see “Captain America: The Winter Soldier” (read Jane’s review here), because the film ties in to the rest of the season of “Marvel’s Agents of SHIELD.”

Relationships and feelings come to the surface for several of our SHIELD agents, but more on that later.

The tense confrontation between May and Coulson continues as the plane is being diverted to the hub. Coulson and his team are able to take over the weapons control on board their plane long enough to save Garrett from a SHIELD drone strike and transfer him on board.

We find out May wasn’t calling out for pizza delivery, she was talking directly to Director Fury. When the encrypted line is restored, Coulson makes her call Fury. When she does, Fury doesn’t answer and we find out he’s dead. But is he really dead? That guy is hard to kill and we never see a body, so who knows. Time will tell. I can already hear Samuel L. Jackson use a variety of expletives in response to someone trying to kill him.

No one knows who to trust anymore, and then we find out the reason why – HYDRA has infiltrated SHIELD. Over the course of seven decades, they have slowly slithered into and made their way to the highest ranks of SHIELD and no one knows who is HYDRA and who is SHIELD. They presume, at this point, Victoria Hand is The Clairvoyant.

When the plane lands at the HUB and agents shoot it up, May is shot in the arm. While Coulson fixes her up, we find out Fury gave May orders to watch over Coulson. Thinking he brought his longtime partner in crime onto the team, May quickly corrects him and we find out she was the one who covertly assembled the team. She confesses she did it for him, to protect him. She can’t quite tell him she loves him, she is only able to tell him he means a lot to her. A lot.

Philinda shippers rejoice! Perhaps this is the very slow start to these two getting together. I kind of wished he would have just grabbed her and kissed her right then, but that’s out of character for Coulson and besides, he still really, really, really doesn’t trust her right now, but I get a romance payoff a little later in the show. He later calls May an ally, but not a friend. I wonder how he viewed her when they were younger and in ops together versus at the start of the season versus now.

Of course, because all fingers point to Hand being the Clairvoyant, you immediately know it’s not her, but she thinks Coulson is and no one seems to think Garrett is, so who do you think it ends up being?

Ward and Skye have a deep, meaningful conversation in the supply closet as agents swarm around them. Without quite saying it, he admits he cares about her and she eventually locks lips with him so Skyeward shippers can unite also!

As I suspected, Garrett is HYDRA but eventually he’s captured. When Grant finds out his old supervising officer was fighting for the wrong side, he’s distraught and infuriated. He asks to escort Garrett to the deepest bowels of the Icebox or wherever SHIELD keeps their baddies, but on the plane ride there, Hand gives Grant the chance to eliminate Garrett once and for all. In a shocking turn, Grant kills Hand instead!

Whaaaat?! Grant is HYDRA? Or is he deep, deep, deep undercover (maybe with directives from Coulson)? He does give Coulson a look as he heads off with Garrett and Hand, so I’m leaning toward undercover over HYDRA. It also puts into question his conversation with Skye in the supply closet. If he is HYDRA, was that all for show? I’m thinking not.

But why kill Hand? Or was she iced instead, her death faked, and she’s going to wherever Fury currently is?

I’m on the edge of my seat until next week’s episode! So many questions, so few answers!

What did you think? Leave comments below.