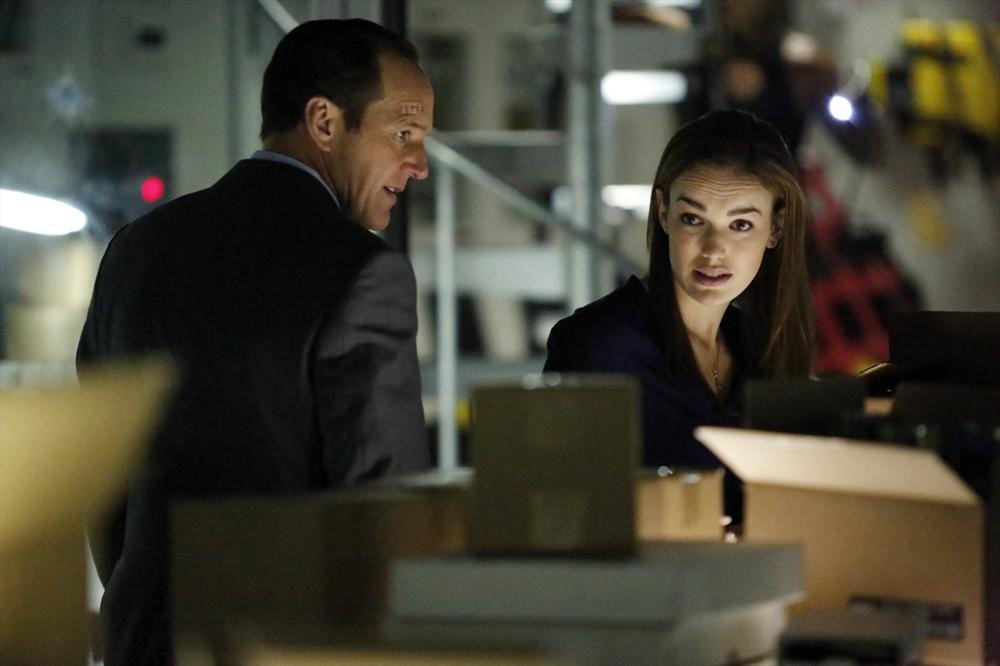 Let me start off by saying I had more than a couple issues with this episode of “Marvel’s Agents of SHIELD.” So forget an actual recap, I feel I bring a unique female perspective to this week’s episode, so let’s focus on that (or not). There is a lot going on in this ep.

When last we left off, it looked like Ward was really a HYDRA agent as he put down Victoria Hand to save Agent Garrett.

This week’s episode, “Providence,” opens with with Ward in Havana, Cuba to break out an incarcerated Raina – the girl in the flower dress. She eyes him warily, unaware he is now working for the Clairvoyant, until he presents her with a thin, but gaily-wrapped shirt box – a present from said Clairvoyant.  Of course, it’s a floral print dress.

Ward takes her to a local Cuban barbershop to meet the Clairvoyant. In strolls Ward, decked out in black, sporting a leather jacket followed by Raina, in the long-sleeved floral dress and stilettos. She’s a little disappointed that the Clairvoyant isn’t psychic at all, but just a man.

Just in this barbershop scene alone, I had multiple fashion peeves:

Connie’s Peeve #1 – How does one fit a pair of 3-inch stilettos into a 1-inch high box?

Connie’s Peeve #2 – It’s Havana, Cuba, people! I don’t care what time of year it is, it’s got to be 85F on a mild day, and Ward is dressed in black wearing a leather jacket?! Raina is in a long-sleeved silk dress in almost 100 percent humidity? Garrett is sporting a wool TURTLENECK?! And none of these three are sweating? That’s totally a superpower if I ever saw one (and one I would love to have). I’m schvitzing just watching them. Technically, that’s three wardrobe issues rolled into one peeve!

Turns out the barbershop is a front for a HYDRA meet. Instead of the hydraulic barber shop lifting you up, up, up, it descends down, down, down into the floor to one of their secret lairs. Garrett wants Raina to figure out the precise recipe for Coulson’s “Jesus Juice” that resurrected him from the dead. Ward hands her the hard drive Skye gave him with all the info off the Bus.

The HYDRA team heads for The Fridge – a classified location where all the confiscated weapons and SHIELD prisoners are taken. There’s a chuckle here when one of Garrett’s minions (not the cute and adorable yellow ones from “Despicable Me”) tries to show off his allegiance with a “Hail HYDRA!” but is shut down with a verbal jab from Garrett.

Back at the Hub, Coulson and the gang are trying to coordinate with whatever SHIELD agents are left out there. A Col. Talbot (Adrian Pasdar) informs Coulson he’s paying the Hub a visit. Coulson takes that as a sign to get the hell out of Dodge. Agent Triplett wants to hitch a ride but Coulson is wary. He relents after Simmons vouches for him. I’m sensing a Simlett or Trimmons ship here, peeps.

Up in the air, with a leaking fuel line and nowhere to go, Coulson orders Skye to wipe their identities and collect everyone’s badge. As Coulson puts the badges into his safe, his own badge starts to blink. When he opens it, his badge is lit with numbers – geographic coordinates.

The coordinates land them in the middle of a Canadian forest and also to a lot of doubts in May’s mind (as well as some others). Coulson’s blind faith that Fury is still alive tests the loyalty of his team. Did HYDRA have a hand in Coulson’s resurrection and, therefore, control him without his knowledge?

This makes no sense, because if HYDRA did have a hand in Coulson’s return, why would Garrett be trying to recreate the serum that brought Coulson back? Wouldn’t he already have it?

The team has to trek seven miles to get to the coordinates (Hey, Wolverine might be just beyond the bend), which brings me to…

Connie’s Peeve #4 – Not quite the other side of the hemisphere, but it’s probably subzero temperatures out there and Skye flits out into the tundra with her jacket practically zipped down to her navel with a hint of cleavage showing? Go put on Garrett’s turtleneck, woman!

Once at the coordinates, they find nothing. Coulson is about to have a meltdown (someone needs a juicebox and a nap!) when he throws his SHIELD shield in frustration. Up pops an automatic sensor that blows it up. Reveal a secret SHIELD bunker manned by Patton Oswalt! Oswalt guest stars as Agent Eric Koenig, the plucky caretaker of Warehouse 13, I mean, Providence, as he calls it.

As the agents enter Providence…

Connie’s Peeve #5 – They were all wearing black shoes when they were trekking through the snow. When they enter the bunker, they are wearing white shoes with black accents. Did they pull a Mr. Rogers at the front door?

Koenig confirms Fury is dead, but secretly tells Coulson in private that he is indeed still alive. He’s gone dark and no one knows where he is. Coulson just kind of looks on in amusement. Koenig tells him that May can park the plane, as he has plenty of space for it, which brings me to…

Connie’s Peeve #6 – While I know the Bus has jump-jet technology, is May supposed to drive the plane seven miles to the bunker, ripping trees down in its wake (and exposing Providence) or does she do a hop-hop-hop (probably also destroying trees in its wake) with the plane to get it over there? She certainly can’t take off and land for such a short distance.

HYDRA agents raid the Fridge for its many artifacts while Garrett releases all the prisoners which possibly sets up the next season for SHIELD. It’ll be like “Which bad guy will we catch this week?” next season, I’m guessing.

As Garrett changes out of one turtleneck into another (!), we notice a nice big steel plate along his side. Does he have some Centipede technology in him also?

Raina informs them that she can’t access any info on the hard drive Ward gave her because it was encrypted by Skye. This sets up an opportunity for Grant to return to the fold to romance Skye to gain her password (which is probably “1234”!) Of course, that’s exactly what Garrett orders him to do.

The episode ends with Garrett bringing in Ian Quinn (David Conrad), one of the Fridge prisoners he released and presenting him with the Gravitonium we first saw in episode 1×3 “The Asset.” BTW, Conrad’s hair looks normal in this episode vs. the unidentified animal which sat on his head in “The Asset.”

We learned in this episode that Garrett rescued Ward from a living hell when he was just a teen and he’s (supposedly) been loyal to him ever since. He’s also been playing Coulson and the gang since Day 1 (allegedly). He (knowingly) slept with May to get her on his side and earned Jemma’s trust by jumping out of a plane to save her (crazily).

I’m not sure what they were going for with Adrian Pasdar’s look as Colonel Talbot. I keep picturing a GI Joe character but I can’t quite put my finger on it.

Is Coulson that easy to fool and manipulate? After all his time with SHIELD?

Do we believe any of this?

Not this viewer. I still call deep, deep, deep undercover with Ward, Triplett a baddy, and Coulson is right about everything.

What did you think? Leave thoughts below!